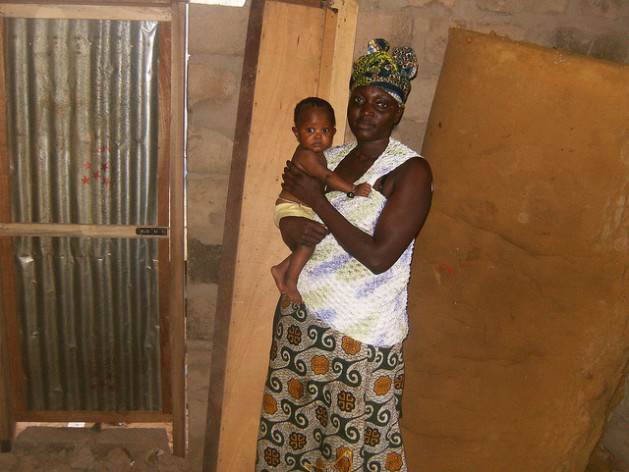 Some 481,880 people in the Gambia are eligible to vote at 761 polling stations across the country on Apr. 4. Pictured here is Amie Manneh and her child who are from Bundung, 15 kilometers from the capital, Banjul. Credit: Saikou Jammeh/IPS

“Every time we engage in elections, there is an improvement, one or two (things change). Eventually, we will get there and we’ll engage them,” Hamat Bah, leader of the National Reconciliation Party (NRP), this West African nation’s third-largest opposition party, told IPS.

The NRP will be the sole opposition party, along with a handful of independent candidates, contesting the elections with the ruling Alliance for Patriotic Reorientation and Construction (APRC), which was founded by army leaders who staged the 1994 coup that brought President Yahya Jammeh to power.

“Let me tell you one thing: this regime will never give us free and fair elections if we don’t fight for it. So the only thing is to fight with them to make sure we get to what we want,” Bah said.

The Gambia has come under serious criticism for its lack of political freedom as Jammeh is currently serving a fourth five-year term as president.

The Economic Community of West African States regional bloc refused to send an observer mission to the Gambia for the November 2011 presidential elections, saying in a statement at the time that “the political environment for the said election is adjudged by the commission not to be conducive for the conduct of free, fair and transparent polls.”

The country’s March 2012 parliamentary elections were also boycotted by the same six opposition parties in protest over what they called an “unlevel playing field” for free and fair elections.

The NRP now occupies one of the 48 elective seats in parliament, independents hold four seats and the remaining 43 are held by the ruling APRC.

Bah, who was backed by three other opposition parties in the November 2011 presidential elections in which he placed third, explained that participating in the elections did not mean that he agreed with the current political environment.

“I support my colleagues 100 percent in their demands for the holding of free and fair elections and for an atmosphere conducive to multi-party politics. Our difference lies on the issue of participation and non-participation. My party doesn’t believe in boycotting elections. We believe that democracy is a process that has to be nurtured, that has to evolve,” he said.

According to Bah, election boycotts do not help Africa.

“For example, in Zimbabwe the Movement for Democratic Change- Tsvangirai (led by Morgan Tsvangirai) has suffered more than any other opposition party in Africa, but they’ve never relented (in participating). And you are aware, last month, the Zimbabwean people overwhelmingly adopted a new constitution. That came as a result of a struggle that continues to this day.”

However, the NRP has not been able to field any candidates for two key mayoral seats – one in the capital city of Banjul and the other in the Gambia’s business hub of Kanifing.

“We intended to put up as many candidates as possible but, unfortunately, apart from the financial issues, some candidates were intimidated,” Bah said. “So it was very difficult to get the number of people we wanted. It seems most people do not want to take on the regime, especially when it comes to elections.”

Political analyst Buba Touray agreed with Bah’s philosophy, and said that vibrant multi-party politics in the Gambia would remain unattainable until the opposition participated.

“The opposition is missing the point,” Touray told IPS. “Elections, such as local government and national assembly elections, are very crucial to the building and sustainment of a vibrant political party. By not participating in such elections, they are missing an opportunity to reach out to the grassroots and build (their parties) ahead of the next presidential elections.”

Touray was not alone in his opinion. One independent candidate, one of five of the country’s top opposition figures who defied their parties and contested the 2012 parliamentary elections as independents, accused opposition party leaders of being self-centred.

“When there is a presidential election, they never talk about boycotting,” he told IPS on the condition of anonymity. “When it’s time for parliamentary and local government elections, which are opportunities for us to make our voices heard, they say boycott. It’s unfair.”

The leader of the main opposition United Democratic Party, Ousainou Darboe, told IPS that such accusations were not fair.

He said that his party would not participate in this West African nation’s forthcoming elections because the Independent Electoral Commission (IEC) had refused to implement promised reforms.

Darboe said that before the 2012 parliamentary elections, his party had raised some of its concerns about the electoral process with the IEC, to no avail.“For us, the holding of free and fair elections is not on the agenda of the IEC,” he said.

Besides allegations of the ruling party’s abuse of state resources, including the use of state security to intimidate voters, the opposition has said that the electoral commission’s chief, Alhaji Mustapha Carayol, has no legitimacy as he has “overstayed his tenure”. Carayol has served two seven-year terms and is set to serve another.

Carayol’s office, however, rejected such claims as baseless.

Meanwhile, the IEC has announced that 481,884 people in this nation of 1.4 million are eligible to vote at 761 polling stations across the country on Apr. 4.