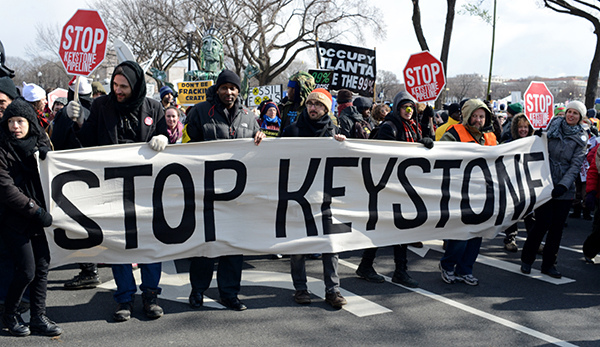 WASHINGTON, Apr 23 2013 (IPS) - Advocacy groups here are applauding the publication of new government concerns, formally expressed Monday by the U.S. Environmental Protection Agency (EPA), over a recent assessment of the environmental impact of a major oil pipeline that would run between Canada and the U.S. Gulf Coast.

Because the EPA will eventually have to sign off on any decision to approve the pipeline proposal, made by a Canadian company called TransCanada, this indication of the agency’s strong reservations over the government’s assessment could now further gum up the consent process for the seven-billion-dollar project.

"Anyone who doesn’t work for an oil company or the Canadian government has said this is a boondoggle." -- 350.org's Daniel Kessler

While a draft State Department environmental impact assessment (known as an SEIS), released in March, found that the Keystone XL proposal would have no major environmental or climate impact, the EPA has now officially given that appraisal a rating of medium severity. In a letter to State Department officials Monday, the EPA expressed “environmental objections” to the SEIS due to “insufficient information”.

“The EPA has basically told the State Department that it needs to go back and do its homework – they looked at the major parts of the analysis and found it insufficient,” Daniel Kessler, a media campaigner with 350.org, an environment group, told IPS.

“That’s not really a surprise: anyone who doesn’t work for an oil company or the Canadian government has said this is a boondoggle. Still, at the end of the day the only thing that matters is what President [Barack] Obama thinks, and the EPA just gave him ample fodder to reject this proposal.”

In previous assessments, the EPA has expressed such strong concern only very rarely, giving out “environmental objections” or worse in just five percent of cases, according to Kate Colarulli, a campaigner with the Sierra Club, an advocacy group.

“We’re very pleased to see this come out of EPA, as it not only highlights a lot of the issues that we’ve point out, but also adds significant credibility to these concerns,” Colarulli told IPS.

“For a federal agency, this is really tough language. EPA’s job is to make sure that such assessments are both factually accurate and thorough, so that decision-makers have the best set of information, and here they’re saying the work needs to be better.”

Colarulli says this concern is underscored by the fact that the agency is in the midst of contentious Congressional confirmation hearings for a new administrator.

“This is a politically sensitive moment for EPA, so for them to come forward now shows they’re willing to put some skin in the game,” she says. “Their concerns about the negative consequences of the Keystone proposal are serious enough that they’re willing to take a public stand.”

Monday’s letter coincided with the end of a public response period on the State Department’s draft assessment. During that time, the agency reportedly received more than a million responses, although these have not yet been made public.

The State Department, meanwhile, has stated that the EPA’s concerns are just another part of this public response. “The State Department has always anticipated that in preparing a Final Supplemental EIS it would conduct additional analysis and incorporate public comments received on the Draft SEIS,” agency spokesperson Patrick Ventrell said in response to the EPA’s letter.

The key concerns for the EPA have to do with the State Department’s determination that the direct environmental or climate implications of the Keystone XL proposal would be negligible.

The EPA suggests that the pipeline’s 50-year lifetime would result in 935 million metric tonnes of carbon emissions, a fact that the State Department appraisal does not counter. Nor does it contradict that the particularly dirty “tar sands” oil (or bitumen) that would flow through the pipeline releases far more greenhouse gas-related emissions than does conventional oil.

Rather, the State Department’s reasoning is that the Canadian tar sands would be developed regardless of whether the pipeline gets built – perhaps transporting the oil by train to the Pacific Ocean, instead. In fact, however, this conclusion has been repeatedly questioned, including by oil industry insiders and business analysts – and now by the EPA, the government’s lead regulator on such issues.

“We note that the discussion in the [draft] SEIS, while informative, is not based on an updated energy-economic modelling effort,” the EPA letter states.

“[W]e recommend that the Final EIS provide a more careful review of the market analysis and rail transport options … recognizing the potential for much higher per barrel rail shipment costs than presented in the DSEIS.”

Such suggestions will almost certainly need to be followed in some form. The pipeline’s cross-border nature has left the State Department as the lead agency in deciding on the Keystone XL proposal, with a decision ultimately needed from President Obama.

If none of more than a half-dozen federal agencies has any objection to the final assessment, the State Department would be able to unilaterally make a recommendation on the proposal. Yet the EPA’s letter makes clear that some bedrock objections already exist, and if they’re not dealt with the EPA would have another opportunity to make comments or to require that the approvals process be diverted directly to the White House.

“Both the State Department and President Obama’s administration have made clear that they intend to run a rigorous process using the best scientific evidence,” Anthony Swift, an attorney with the Natural Resources Defence Council, a watchdog group, told reporters Tuesday.

“And it’s impossible to do that while ignoring the findings of the EPA, which has the most expertise in environmental review. It would be very difficult to imagine the State Department ignoring the EPA comments.”

Beyond some of the conclusions in the State Department’s assessment, the way the SEIS itself was undertaken has also come under fire. This follows on a 2011 investigation by the agency’s inspector-general that found that a previous version of the evaluation was carried out by a consultant with close and undisclosed (though not unlawful) links to TransCanada.

While that incident led to reforms of contractor-selection criteria, several groups are now alleging that the State Department has already violated those regulations by hiring a group called Environmental Resources Management (ERM) to complete the draft SEIS. ERM reportedly also has undisclosed ties to TransCanada.

On Monday, 11 environmental and public interest groups requested another investigation from the State Department inspector-general. A letter detailing the request, which IPS has seen, alleges “misleading disclosures on ERM’s conflict of interest questionnaire … [and] the Department’s apparent attempt to conceal ERM employees’ experience on TransCanada projects.”