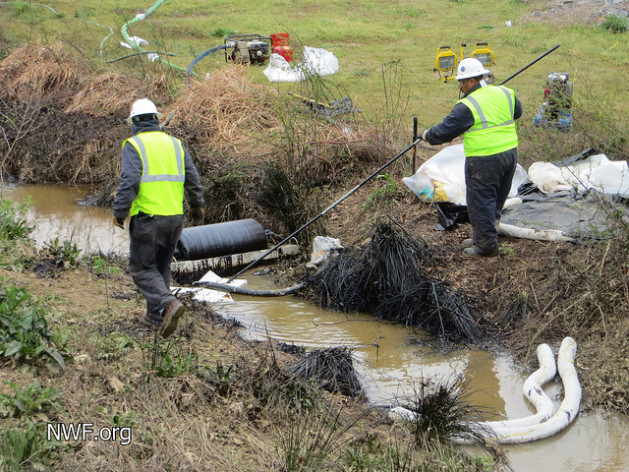 Apr 3 2013 (IPS) - Environmental groups are sounding alarms about conflicting reports on the size and seriousness of an oil spill that took place late last week in the southern U.S. state of Arkansas.

The spill has generated particular interest because it emanates from a pipeline carrying “tar sands” oil, a particularly heavy and environmentally destructive oil composed of bitumen and diluted with lighter elements.

A lot of the people we talked to said, ‘We didn’t even know there was a pipeline under our homes.'

It also comes just as politicians and environmentalists here are engaged in a debate over whether to approve the construction of a major pipeline – known as Keystone XL – that would carry the same tar sands oil from Canada to the southern U.S.

“Every time they talk about the oil spill, they describe it in different terms – sometimes as crude oil, sometimes Canadian oil – but we’re fairly certain it is tar sands oil.”

On Tuesday, 22 homes in the town of Mayflower were evacuated and at least 12,000 barrels of what the Sierra Club, an environment group, calls the “dirtiest oil on Earth” had been released, reportedly darkening yards and driveways across the suburban town.
Critics of the Keystone project, including BOLD Nebraska, are particularly concerned about the spill’s release of benzene, a carcinogenic chemical found in tar sands oil, and bitumen, which climate scientists say releases 17 percent more greenhouse gases than standard oil.

Meanwhile, President Barack Obama is surveying the environmental and health evidence in order to determine whether the construction of Keystone XL would serve the “nation’s interest”. He is expected to give a final ruling on Canadian company Transcanada’s application to build the pipeline by late summer.

Despite environmental concerns, recently released polls from the Pew Research Center suggest broad support has been gathering for the project’s approval, likely bolstered by Congressional Republicans’ trumpeting the project’s potential for job creation.

The spill also comes a month after a draft environmental impact assessment from the U.S. State Department concluded that the Keystone XL project would “not likely result in significant adverse environmental effects”. That conclusion is likely to be subject to greater scrutiny as Mayflower residents continue to reel from the spill’s damage.

“To see the devastation in that town is pretty sobering,” Glenn Hooks, a spokesman for the Arkansas chapter of the Sierra Club, told reporters Tuesday. “I spoke with people whose lives have been upended – they want to know when they can go home, and they want to know if there will be a home to come back to.”

Anthony Swift, an attorney with the Natural Resources Defense Council, a watchdog group, said the spill brings the risks of the Keystone XL pipeline into “sharp relief for the American people”.

Swift noted that bitumen oil pipelines require higher operating temperatures that make ruptures more likely, citing a study that found that states that carried bitumen oil for the longest periods had experienced 3.6 times as many spills as the national average.

He called the Mayflower oil spill “a tragic warning”, but alluded to previous warnings that had gone unheeded.

In the days following the Mayflower spill, the opaqueness surrounding the leak and the pipeline in general has been of particular concern for environmental groups.

“A lot of the people we talked to said, ‘We didn’t even know there was a pipeline under our homes,’” said Hooks of the Arkansas Sierra Club. “And I’m sure the ones who did know were surprised to learn it was a tar sands oil pipeline.”

Kleeb, of BOLD Nebraska, pointed to ExxonMobil’s failure to disclose potential health hazards by specifying sooner exactly what kind of oil had been spilled.

“ExxonMobil is not giving folks a clear sense of what was spilled … It’s obvious why they’re not saying it’s tar sands,” she said, referring to the growing concerns over tar sands oil pipelines in the midst of the Keystone debate.

Exxon spokesperson Charles Engelmann said the leaking pipeline was built in the 1940s, but did not have any information on when it last underwent maintenance. In 2010, the U.S. Department of Transportation fined the company for going more than five years without maintenance on a section of the same pipeline beneath the Mississippi River.

With environmental groups already sceptical of an incomplete picture of the environmental and public health impact of Keystone XL, many are now suggesting that these growing signals of oil companies’ poor commitment to maintenance and regulation standards should carry serious implications for the president’s ultimate decision to approve the project.

“Looking at the differences between the reality and rhetoric, TransCanada’s claims that this pipeline will be different don’t add up,” warned Swift of the National Resources Defense Council.