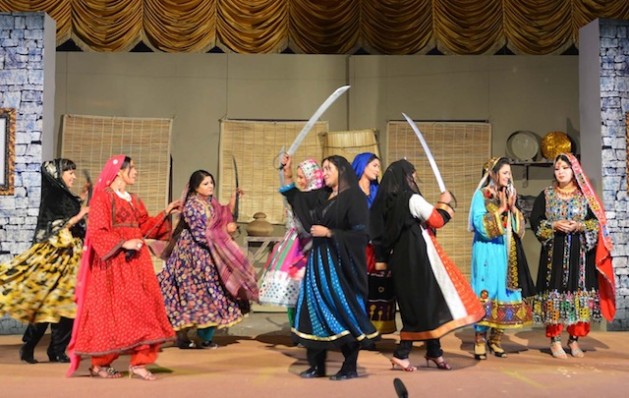 PESHAWAR, Pakistan, Apr 5 2013 (IPS) - The Taliban may have placed a ban on theatre, but women in Pakistan’s northern provinces won’t allow the threat of the militants’ reprisals to keep them off the stage.

Meena Gul, a 32-year-old who made her debut in the recent production of Khushal Khan Khattak, a play based on the life of the 17th century Pashtun warrior poet who promoted Afghan unity against the backdrop of Mughal rule, is one of these determined young actresses who has found her calling and will not give it up without a fight.

Although television has long been her passion, she tells IPS that her brush with theatre proved to be a “welcome development in my decade-long career in ‘showbiz’.”

Directed by the award-winning Masood Ahmad Shah, the play offered 15 actresses with varying degrees of experience the chance to perform for a live audience, a challenge for those whose careers had revolved around pre-recorded TV shows.

The stage “demanded more focused work”, Gul said. Unlike with TV, which allows you to repeat a shot numerous times, theatre provides just one chance to do justice to endless rehearsals and hours of working with a director to capture a scene or a specific role.

Gul began her career with Pakistan Television and is something of a local screen star, but she feels the theatrical debut “emboldened and encouraged” her to seek more performances and rely on acting as a livelihood.

She says the Afghan government will soon be staging the same play in Kabul and Kandahar, where she will play a leading role. She and her fellow female performers are anxiously awaiting the trip, during which they hope to make lasting connecting with women on the other side of the border who suffer the same gender and cultural repression under the Taliban.

When the play was first staged in Peshawar, capital of northern Pakistan’s Khyber Pakhtunkhwa province, in early March, it elicited praise for building “cultural bridges” between the neighbouring countries.

Khushal Khan Khattak was renowned for his writings that spoke to a deep sense of Pashtun identity and unity.

The largest ethnic group in Afghanistan and the second largest in Pakistan, Pashtuns share cross-border cultural ties and commonalities, the most recent being the twin experiences of living with – or under — the majority-Pashtun Taliban.

Now, the play promises to foster solidarity among Pashtun women, who often bear the brunt of the Taliban’s extreme religious, patriarchal views.

Playwright Noorul Bashar Naveed told IPS that the 15 actresses who performed in his play have “breathed new life” into the world of drama, which was withering under the boot of this male-dominated society.

“The majority of the people here don’t approve of women venturing out in public due to social repercussions. It is not acceptable for women to appear in films, dramas or theatrical productions,” he says.

But the public’s reaction to the play suggests a change in this old view. Families, friends and supporters packed the 600-seat Nishtar Hall in Peshawar, the largest theatre in KP, on all three nights of the play’s run. Each performance received a standing ovation, with applause ringing out long after the curtain call.

The play’s overwhelming success is no small feat in a place where even male actors hesitate to accept roles out of fear of the Taliban’s wrath.

Not only actors but other artists, too, frequently come under attack here.

“Taliban militants have destroyed 500 CD and music shops in KP and the Federally Administered Tribal Areas (FATA) since 2005 and have been warning (people) to away from acting,” Javaid Babar, president of the KP Artists Association, told IPS.

Babar says that about 200 actors, dancers and actresses were forced to leave the profession in 2008 when the Taliban officially labelled drama and films “un-Islamic”.

“In 2009, the Taliban executed the famous dancer, Shabana Begum, in Swat and hung her body from an electricity pole, which prompted (many artists) to stay home or leave for other cities,” he added.

Public performances are few and far between in northern Pakistan. The last play, on the life of Pashtun poet Rehman Baba, was staged in December 2012.

As a result, few actors have been able to secure a livelihood.

“Most actresses come from poor families,” Babar said, and often “lead miserable lives” because they are prevented from pursuing their dreams.

Many are forced to take up odd jobs to pay for their daily expenses, since acting is not sufficient to pay the bills.

Recognising its potential, both the Pakistani and the Afghan governments are taking steps towards ensuring the play continues to run, and travels across borders.

Parveen Malal, Afghanistan’s cultural attaché in Peshawar, has asked the cultural department of the KP government to stage the play in the Afghan cities of Kabul, Jalalabad and Kandahar, predicting that the actresses will receive a “wonderful response” from art-lovers on the other side of the border.

Masud Ahmed Shah plans to change the script slightly to cater to the local audience in Afghanistan, and cast some Afghan women in female roles in an effort to cultivate unity between the women.

Pakistani officials believe the play could help change social stereotypes about women. Sultan Hanif Orakzai, secretary of the culture and information department of KP, who watched every performance at Nishtar Hall, says the play was part of government efforts to “spotlight services rendered by different Pashtun heroes…bring women to the stage and encourage families to enjoy cultural events together.”

He says the play enabled the audience to empathise with the strong female character, Khushal Khan Khattak’s steadfast wife who stood by him in the most trying times, enduring even his imprisonment during the reign of the Mughal emperor Aurangzeb Alamgir, and could lead to greater understanding and appreciation of women as independent individuals.

“I will remember the strong female characters for a long time to come,” Saeeda Babi, who watched the play with her three children, told IPS.