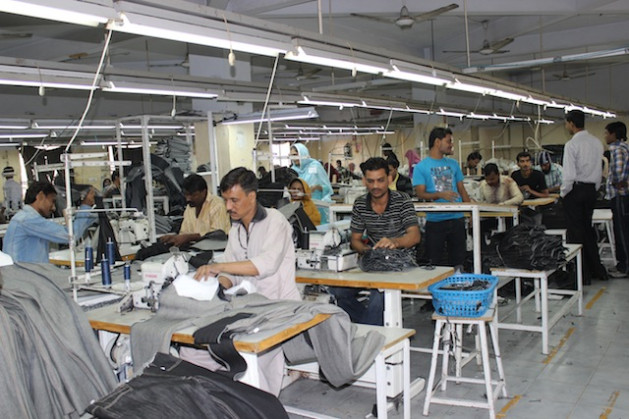 The textile industry is suffering from the blackouts. Credit: Zofeen Ebrahim/IPS

KARACHI, Pakistan , May 23 2013 (IPS) - Raheel Tauseef is feeling quite powerless this summer. Frequent power outages in the industrial city of Faisalabad in the Punjab province of eastern Pakistan, where the 29-year-old and his family run three hosiery factories, are taking a heavy toll on their business.

“The power outage is anywhere between 12 and 16 hours,” Tauseef told IPS. We do get a respite of some four hours, but even that is not at a stretch. Just as the machines get rolling, the power goes off.”

So bad is the situation that the family has had to lay off over a thousand workers in the last two months. “Many factory owners are now keeping workers on a daily wage earning basis and pay them only on the days when there is work,” he said.

Little wonder then that Mian Zahid Aslam, president of the Faisalabad Chamber of Commerce and Industry, was sounding frustrated when IPS caught up with him over the phone.

Having sat through three gruelling back-to-back meetings, all he could say was: “We are done with meetings. We want some action now, and quick.” Apparently, all that the various stakeholders could discuss at the meetings was how best to end the energy shortfall and revive the dying industry.

“The fomenting anger of the factory workers will spill out on the streets if something is not done on a war footing,” said Aslam.

Fearing precisely such violence, the provincial government of Punjab has directed the administration to avoid unscheduled power outages which have now reached up to 20 hours a day.

Meanwhile, many industrialists in Punjab have installed huge generators, run either on gas or diesel, to meet their export deadlines. But this is not without its problems either.

“Due to shortage of gas, we get it only for three days,” said Tauseef. In desperation, many factory owners have switched to diesel, but even that has become precious now. “Buying diesel from the stations is almost like begging for it,” he added.
Over 80 per cent of the 3.2 million people in Faisalabad, a city dubbed the Manchester of Pakistan, are linked to the textile industry. It is home to nearly half of Pakistan’s textile factories.

The national trade body All-Pakistan Textile Mills Association reports that the sector accounts for over 50 per cent of Pakistan’s total exports of roughly 25 billion dollars, and employs 38 per cent of the manufacturing sector workforce. That works out to about 3.5 million people.

According to experts, Pakistan is losing between 1.3 per cent and two per cent of its gross domestic product due to the energy crisis and an ineffective law and order apparatus.

And the summer has only made the situation worse. With the mercury soaring well above 40 degrees centigrade across the country, there is a shortfall of 7,000 mega watts of power. Of the total demand for 16,000 mw, the available supply is only 9,000 mw.

Power cuts were a problem all political parties acknowledged in their manifestos for the May 11 elections. The party which finally won – the Pakistan Muslim League-Nawaz (PML-N) – had, in fact, ranked it second after the economy on its list of important things to address.

Their leader and now the prime minister designate, Nawaz Sharif, promised in his election rallies to end load-shedding in two years if his party was voted to power. He also vowed to make Pakistan one of the top ten economies of the world and talked about expensive schemes like bullet trains and privatising the national airline and the railways.

Not everyone was impressed, though. Haris Gazdar, a leading economist based in Karachi, capital of Sindh province, hoped the new government would “rethink the bullet train business.”

“Our politicians promise us the moon,” said Tauseef. “Energy is indeed a big challenge and I have yet to see a plan of action.”

On its part, the PML-N plans to pump in two billion dollars to generate 10,000 mw of electricity in the next five years. Half of this is expected to come from developing the Thar coalfields in Sindh and setting up coal-fired plants in that southern province.

This meets the approval of Pakistan’s former science and technology minister, Professor Atta ur Rahman. The previous ruling Pakistan People’s Party, he told IPS, had “opted wrongly for oil-based power plants due to the huge kickbacks they received.”

Top priority should be given to converting all the country’s power plants to coal, he believes. “China and India both use coal as the major source of energy,” he said.

And before the environmentalists leap up in protest at his suggestion, he added, “We can employ cheap locally fabricated filtering devices to clean up the emitted soot.”
Rahman is hopeful the new government can “overcome the problems.”

His only caveat: “They must appoint competent and honest professionals and observe merit.”

The water and power ministry too has warned that unless corruption in the National Power Control Centre in Islamabad is curbed, no improvement in performance can be expected.

The PML-N government will have to take some tough decisions if it is going to tackle the energy challenge with any amount of seriousness.

“To overcome the energy crisis, prices will have to be raised and dues recovered,” said Gazdar, who is the director of the Collective for Social Science Research in Karachi. “Alternatively, they can allocate more gas for power generation at the expense of other consumers.”

Petroleum minister Sohail Wajahat H. Siddiqui has already indicated a price hike without which, he said, the sector would suffer “irreparable economic and efficiency loss.”

With the government providing as subsidy the gap of Rs 3.02 per unit between the cost of producing electricity (Rs 11.91 per unit) and the price at which it is sold to the consumer (Rs 8.89 per unit), the Pakistani consumer can expect a hike in tariff as soon as the new government takes over the reins of power.