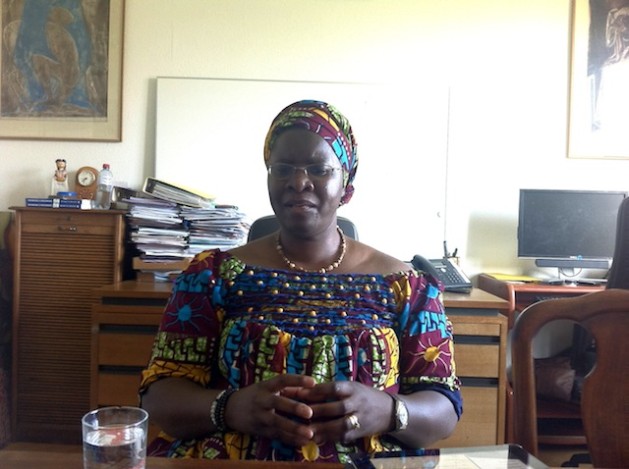 Nyaradzayi Gumbonzvanda, the general secretary of the global rights network World YWCA, said that further economic and social empowerment was needed to change the lives of women in Africa. Credit: Ravi Kanth Devarakonda/IPS

GENEVA, May 7 2013 (IPS) - Nyaradzayi Gumbonzvanda, a human rights lawyer and the general secretary of the global rights network World YWCA, knows what it is like to struggle against poverty and violence: she herself comes from a poor family in Magaya village in Murewa district, which lies northeast of Zimbabwe’s capital Harare.

But Gumbonzvanda has travelled a long way from her home. And she has spent much of her life trying to change the lives of women who were not as fortunate as she was.

And now she is a candidate for the executive director position at United Nations Women – a post formerly held by Chile’s ex-president Michelle Bachelet, who resigned in March.

In an interview with IPS at her offices in Geneva, Switzerland, Gumbonzvanda said that economic growth and development have to address “opportunities for creating wealth at household level, but also structural issues such as the violence and inequality that women continue to experience almost on a daily basis.”

She applauded development on the African continent, while stressing that further economic and social empowerment was needed to change the lives of women.

“I see women going forward in various areas and sectors in all African countries, who are able to shape a new narrative. We need economic and social empowerment – it is not enough to have political empowerment,” she said.

Q: Let us start with the growing rates of rape and domestic violence against women. How grave is this problem and is it universal?

A:  I think this is one of the biggest issues facing women and girls in the world today. I see the violence against women as a manifestation of inequalities, disempowerment and exclusion…

Social disempowerment, the fact that women are seen as second-class citizens who do not often have a voice or rights about their own bodies; the painful realities of poverty and violence against women; and child trafficking for sexual exploitative work are all burning issues that need to be addressed.

What is important is that we work on preventing violence against women, including domestic violence, violence in conflict (situations) and sexual abuse. The prevention part is critical, (and it should be) followed by robust policies in different social sectors within countries and at the international level.

Q: Over the last 30 years there have been tremendous changes in the global economy and culture – largely due to the internet and globalisation. What impact has this had on women?

A:  I think there are a couple of things that happened in the last 30 years. I was in Beijing (in 1995) for the (World) Conference on Women and I would argue that there has been real international work on the international norms to do with women and human rights that is progressively good.

We now have conventions and treaties at an international level, and even at regional level, like the Maputo Plan of Action for Women (on reproductive and sexual health rights).

Even at the normative level, we see quite a lot of work and some good progress. However, whether an economic model can address the structural issues that contribute to violence against women still needs to be resolved.

Q: Are governments doing enough to address these challenges?

A:  They are not sufficient. I think governments need to get (their) priorities right and do more when they formulate their budgets. The greatest security of any nation is when its mothers and children are secure, when there is food on the table and water nearby, when there is a functioning school and, ultimately, the possibility of getting a job. That is the most secure nation.

I would urge our governments to rethink the relationship between military expenditure and expenditure on social and basic services. Just by buying one military helicopter less, governments can build 10 schools. That is the paramount challenge for governments all over the world.

Q: While there has been renewed conflict on the African continent, there are also great successes and progress with regards to development and empowering women. What do you think still needs to be done for women on this continent?

A: This year, the African Union is celebrating its 50th anniversary and African women were quite involved in the decolonisation process. They were in the trenches looking for a new Africa – and it has happened.

We are celebrating Nkosazana Dlamini-Zuma, who is the first African woman to lead the African Union, and that’s good for Africa.

We see countries like Rwanda and others having (significant) number of women in decision-making (positions). And yet we have to address the issue of conflict. As long as countries remain in conflict situations, and as long as there is violence, it continues to hold us back.

The continent, from the Cape to Cairo, is a rich one and we need to look within Africa (and see) where women can be more involved in the big sectors like mining, transport, and agriculture.

Q: We see technology playing a role in developing the continent with SMSs being used to inform mothers of vaccinations for children etc. What role does it have to play in bettering the lives of Africans?

A: We see a lot of potential in Africa in mobile telephony and we see it being used in Tanzania around services for family planning or for the immunisation of kids. We have also seen the introduction of mobile (phone) banking services in Kenya and Zimbabwe, and these are powerful ways to enable and empower communities.

There is a lot of potential that can be harnessed from technology and what is critical is the infrastructure and regulatory framework, which needs to be enabled.

Q: What, in your opinion, are some of the greatest successes of African women? And what can we learn from them?

A: I think I always reached out to the women leaders from my continent.  You have to remain grounded in your identity … You (have to) embrace the totality of what is good about your own context. And that is your contribution as a global citizen … My identity is informed by the collective identity.