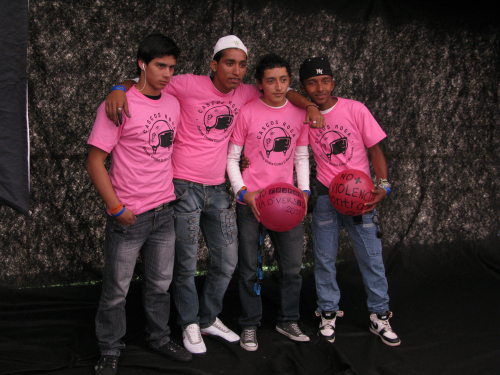 Damián Valencia (second right) and other members of the young people's network against machismo. Credit: Courtesy of Cascos Rosa

QUITO, May 14 2013 (IPS) - At the age of 20, Damián Valencia speaks knowledgeably about every aspect of gender equality. He is a member of Cascos Rosa, a young people’s initiative working for cultural change against machismo and violence against women in Ecuador.

“We seek and promote gender equality and equal rights and opportunities for men and women,” said Valencia, one of the founders of the network of young people – originally all men – united against machismo, whose members call themselves Cascos Rosa (Pink Helmets).

The group was formed in 2010 by teenagers and young adults who had received awareness raising training on gender equality, violence and ways of expressing masculinity from the Ecuadorean chapter of Acción Ciudadana por la Democracia y el Desarrollo (ACDemocracia – Citizens’ Action for Democracy and Development) and the Coalition against Trafficking in Women and Girls in Latin America and the Caribbean.

Valencia said that gender equity “is such a huge problem that it affects everyone.” He acknowledged that “an improvement can be seen” in the country, but added that “even so, we are still living in a patriarchal society.”

Belonging to Cascos Rosa has had a major impact on his life, he said. At home there was “a machista scheme of things” in which the men “did not wash clothes or do the ironing, did not cook or wash dishes, and expected everything to be done for them.

“Now we all share the same jobs at home, no one is above anyone else, and we have the same rights and opportunities,” he said.

The network promotes a new mentality for combating gender violence and the consumption of prostitution and pornography.

Their pink helmets and T-shirts “break the stereotype that only women wear pink; that boy babies are dressed in blue and girls in pink,” said Valencia, the network’s spokesman.

Cascos Rosa originally had 33 members who emerged from the first workshops held in educational centres, and now has 140. So far 900 teenagers and young people have received training. At first, only young men were included, but as of this year women have joined the ranks.

The network members replicate their knowledge by giving talks in schools and conducting awareness raising activities at gatherings that draw young people, like music festivals. The work of the Cascos Rosa has spread from Quito to four other municipalities in the northern province of Pichincha, where the local government supports the project.

They wear pink T-shirts at their talks, meetings and other activities, in order to create an impact and practise what they preach.

Carolina Félix, who runs workshops for the network, told IPS that it is an ongoing effort, because deep-seated change is not achieved in a 12-hour training session. “That is not enough to modify behaviours and attitudes, let alone reality,” she said. But she added that the workshops do spark reflection, interest, questions and new practices among young people.

“We do not impose a way of thinking. We encourage the construction of a society based on equality, human rights and equity. The goal is to create spaces where men do not have power over women, where they express their emotions, and where women also understand that we have rights, freedoms and responsibilities, just as men do,” Félix said.

The aim, as well as shaping character and educating youngsters, is to encourage leadership traits and to make each young person a multiplier agent of their knowledge and experience, at home as well as at educational centres.

What happened in Valencia’s home shows that this can be done. In this middle-class family of three children, where the parents are shopkeepers, “everyone has changed, especially my father, who now washes the dishes and sometimes does the ironing. My mother is happier and calmer because her burden is lighter,” Valencia said.

“A definite change is taking place,” said Félix, describing the impact on the new generation taking up the baton for gender equity. “They are not afraid of showing themselves as they are, and neither do they say, ‘poor women, such victims!’ because it is an issue both men and women have to work on.”

Violence: the tip of the iceberg

The Transition Commission set up by the government to determine the public institutions that will guarantee equality between women and men recognises the need to “promote cultural transformations” to eradicate inequality and discrimination.

The priority, according to Alexandra Ocles, who chairs the commission, is to transform “cultural patterns involving values, customs, practices, the social imaginary, habits, sexist stereotypes, representations and symbols to do with sexual diversity and the traditional roles that society assigns to women and men.”

Gender violence is one of the most serious problems, according to the National Survey on Family Relationships and Gender-Based Violence against Women, the first of its kind to be carried out in this country of 14.5 million people.

The survey, carried out in 2011, found that 60.6 percent of the women interviewed had suffered some type of gender violence: physical, psychological, sexual or financial.

Psychological or emotional violence was the most frequently cited, by 53.9 percent of the respondents, followed by physical violence (38 percent), financial or property violence – the removal or retention of property or economic resources belonging to the victim – (35.3 percent) and sexual violence (25.7 percent).

“Ninety percent of married or cohabiting women (in the sample) who had experienced violence were not separated from their partners. Some 52.5 percent of them said that couples must overcome their difficulties and stay together, and 46.5 percent said their problems were not so serious,” says the study, carried out by the National Institute of Statistics and Census (INEC).

The debate on gender-based violence emerged into the public arena in the late 1980s. The first special police units providing services for women and families were introduced in 1994, and one year later the law on violence against women and the family came into force.

In 2007, the National Plan for the Eradication of Gender-Based Violence against children, adolescents and women was launched, which includes in its aims “changing discriminatory social and cultural patterns.” The constitution approved in 2008 mandated the integration of a gender perspective into all public projects and established institutional guarantees for women’s human rights.

In recent years there have been advances, including provision of comprehensive services in the justice system, campaigns against machismo and gender violence, and a strategy to mainstream a gender perspective in higher education.

Progress has also been made in women’s participation in the different branches of government: the proportion of women in the judiciary climbed from six percent in 2006 to 43 percent in 2011; in the executive branch their participation rose from 14 to 33 percent in the same period; and in the legislature the share increased from 25 to 34 percent.

Left-leaning President Rafael Correa has declared that achieving gender equity is one of the priorities of his government.