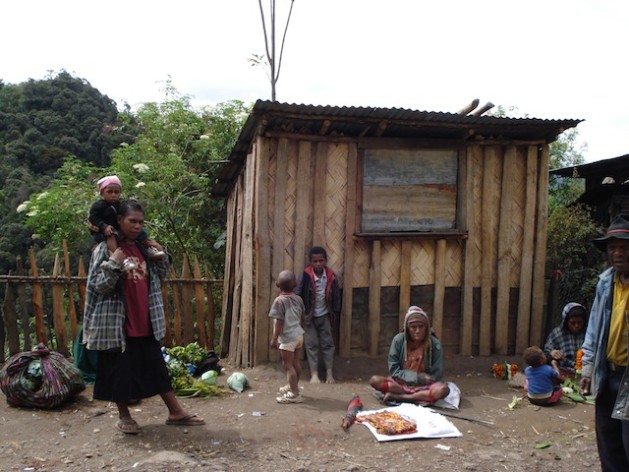 Villagers in the Simbu Province of Papua New Guinea, where over 200 people have been killed in sorcery-related violence. Credit: Catherine Wilson/IPS

SYDNEY, Jun 15 2013 (IPS) - Following worldwide outrage over a spate of brutal sorcery-related murders in Papua New Guinea, the government has rolled out a new hard-line approach to spiralling crime in this southwest Pacific island state.

Repeal of the much-criticised 1971 Sorcery Act means that sorcery-related killings will now qualify as murders and will be punishable by the reinstated death penalty.

But for many who reside in the mountainous highlands in the country’s interior, where there is scarce infrastructure and government services, safety from sorcery-related violence will remain a distant reality unless promises on paper translate into action at the local level.

Monica Paulus, a human rights defender in the highlands province of Simbu, supports the government’s move to repeal the Act. She knows what it is like to be accused of ‘sanguma’, the indigenous term for sorcery or black magic, and now works to support those who are targets of vigilante style purges.

In the Kundiawa district of about 58,000 people, Paulus is aware of five major incidents of sorcery-related violence in the last five months.

But she told IPS legislative reform alone “won’t make a big difference”, explaining that cultural pressure on communities to remain silent about such crimes would likely continue, while the impunity of perpetrators would have to be challenged by police capable of rapid response.

She added that justice was dependent on victims and witnesses being given adequate protection, and the reduction of widespread gender inequality.

Particularly in rural areas, where more than 80 percent of the nation’s population of seven million reside, spiritual beliefs are still used to explain events in the physical world.  Death, especially of young people, is attributed to evil forces. Those accused of sorcery – particularly the elderly, women and widows – are often unable to defend themselves from the young disenfranchised, males making the allegations.

In 2009, a rise in reported ‘sanguma’ violence, with an estimated 200 related killings in the Simbu Province alone, prompted the government to launch a Constitutional and Law Reform Commission to investigate the pre-Independence Sorcery Act, whose aim to punish so-called black magic practitioners had raised questions about the difficulty of proving “witchcraft” in a court of law.

The subsequent recommendation that the Act be repealed was accepted by parliament two weeks ago.  Simultaneously, the government reinstated the death penalty applicable to crimes of murder, rape and violent robbery.

Dr. Arnold Kukari at the National Research Institute based in the capital, Port Moresby, commented that the Act’s abolition signified the government’s “first step to address sorcery-related violence”, but said it was “not enough.”

“A major problem has been poor law enforcement by the police,” he continued.

The horrific immolation of 20-year-old Kepari Leniata in front of onlookers in the highlands town of Mt. Hagen in February, after she was falsely associated with the death of a young boy, unleashed wide public condemnation. Arrests were made and two individuals subsequently charged.

The following month six women and one man were reportedly tortured following allegations of witchcraft in the Southern Highlands Province, while in April two accused women were kidnapped and one publicly beheaded in Lopele village in southern Bougainville.

The police force has long been plagued by a lack of resources, with common reports of victims being asked to pay for fuel for police vehicles and “fees” for investigations and arrests, while corruption is rampant.

However, according to a local media public awareness campaign this month, the government is planning to boost police numbers and training to support its new crime fighting measures.

Bringing perpetrators to justice will be dependent on improving community trust in law enforcement and proper protection of witnesses, who are often accused of sorcery if they provide testimonies.

Reluctance to report incidents is also due to many Papua New Guineans’ fear of sorcerers and a widespread belief that removing them is necessary to protect the wellbeing of the whole community.

Gender inequality has contributed to the problem, with Amnesty International claiming that women are six times more likely to be accused of witchcraft.

Jack Urame, director of the Melanesian Institute in the Eastern Highlands Province, said that “a deeply embedded belief that men are more important in society” makes it difficult for women to defend themselves or even retaliate.

“Sanguma is a dangerous name in our country,” Josephine, a woman who has suffered the stigma of sorcery for more than ten years, told IPS.  “It affects you for the rest of your life and affects your children as well.”

Kukari added that sorcery-related violence was driving women to “live in fear and isolate themselves from active involvement in all spheres of development.”

Challenging harmful beliefs through education and increased law enforcement is essential, but there is an equally pressing need to address widening socio-economic disparity in a nation unlikely to achieve any of the Millennium Development Goals (MDGs), experts say.

A 2010 Oxfam report highlighted a Health Services finding that sorcery-related violence is increasingly associated with “high expectations that have turned into frustration and anxiety as many people have found themselves excluded from the benefits of development.”

It identifies a trend of sorcery allegations being used to veil premeditated assaults motivated by revenge in disputes, envy of another’s success or desire to possess their land and wealth.

Hardship in the highlands is exemplified by a lack of economic opportunities and basic services. In Simbu, where male and female literacy is 48 percent and 34 percent respectively, there are a total of just seven medical offices and 31 health centres serving a population of 260,000.

There are no quick fixes to this complex collision of ancient ways with the harsh realities of low human development. Legislative reform and better law enforcement are a start, but nothing short of an integrated multi-sector approach embracing cultural, social and economic change is going to reduce the tragic fallout.

“All Papua New Guineans must take ownership of the problem,” Kukari emphasised. “Everyone, including the government, parents and churches have important roles to play.”

But Josephine pointed out that addressing the issue effectively necessitates directly affected grassroots communities overcoming their fear of speaking out.

“People have to acknowledge and talk about the problem before they can find a solution,” she said.  “At the moment, people don’t even know how to defend themselves.”