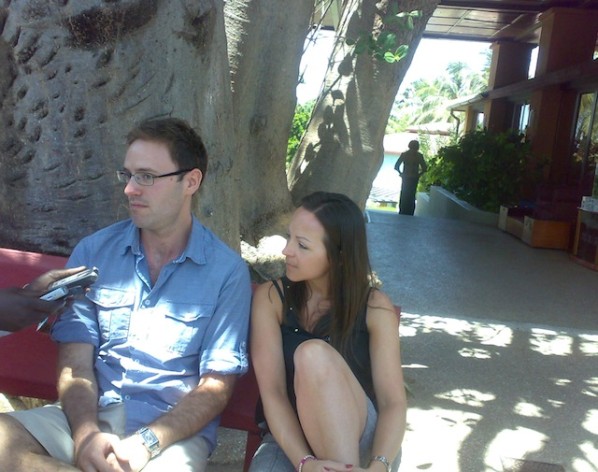 Ben Ryan and Rachel Slater, tourists from the United Kingdom, pictured at the Kairaba Beach Hotel, a five-star hotel on the idyllic coast of Kololi, say that they have enjoyed their stay in the Gambia and will return. Courtesy: Saikou Jammeh

BANJUL , Jun 26 2013 (IPS) - Mr. and Mrs. Gridley* are among a handful of tourists laying pool side and working on their tropical tan at the Kairaba Beach Hotel, a five-star hotel on the idyllic coast of Kololi in the Gambia.

The English couple previously travelled extensively in the Caribbean, India, and Thailand before discovering the Gambia, a small nation that calls itself the “Smiling Coast of Africa”.

“Then we decided that there is no point flying nine hours away to get what we can get here. So we keep coming here every year,” Mrs. Gridley tells IPS.

Over 180,000 tourists, mostly from Europe, visited the Gambia this year, including Ben Ryan and his girlfriend, Rachel Slater.

“There are not many countries I have the desire to return to for a second time, but the Gambia is most definitely one of them, and I plan to stay at the Kairaba once again,” Ryan, who is from the United Kingdom, tells IPS.

Ryan and Slater spent their time in this West African nation visiting national parks and immersing themselves fully in local culture. “We’ve always talked about coming to Africa, and the Gambia is one of the places that was affordable and offered the wide variety of activities we were looking for,” Slater tells IPS.

Tourism currently accounts for 14 percent of the Gambia’s GDP and employs over 100,000 of the country’s 1.7 million people, according to a February report issued by the Gambia Bureau of Statistics.

“Tourism, which was once a key driver of the economy, remains the country’s most significant foreign exchange earner. Agriculture accounts for approximately one third of GDP and over 70 percent of employment,” according to the World Bank.

When the military took power in 1994, the tourism industry saw sharp declines, as western countries issued warnings to their citizens to avoid visiting the Gambia due to the unstable situation. Reports suggested 65 percent of those working in the tourism industry lost their jobs.

But the Gambia has much to offer tourists, from tranquil and beautiful beaches, to the slow meandering River Gambia, and awe-inspiring crocodile pools.

In addition, as Mr. Gridley states, “the weather here is guaranteed to be top notch, it’s just a short flight away, and there is no time difference with the U.K.”

Benjamin Roberts, director general of the Gambia Tourism Board, admits that all tourist destinations across the world offer virtually the same services. But, as tourism expert Adama Bah states, each destination has its own unique traits.

“The Gambia is no different from an area in Spain that has sun, sand, and the sea. What you have to consider as a destination is what is your unique selling point? What do you have that others don’t? The openness of the people, and religious harmony, that’s what the Gambia has,” Bah tells IPS.

In a 2006 survey sponsored by the Gambian government and computed from feedback from tourists returning home, visitors here gave Gambian people a score of 93 percent for friendliness, even higher than that given to the food and accommodation.

Roberts says that this past year’s travel season, which ended in April, appears to have been successful.

Bah, however, cautions authorities against taking these figures for granted.

“Tourism is not just about numbers, it is about the amount of money tourists spend in the country,” he says.

“If tourists are coming and staying only in the hotels, we are not maximising the benefits of tourism then. The only way we can do this is when tourists get out of their hotels and come and spend money on the local people … that’s where the local economy is.”

Nonetheless, Minister of Tourism and Culture Fatou Mass Jobe-Njie told the media earlier this year that “the season is good, and the best is yet to come.”

This is also the view shared by Roberts. “The minister’s optimism is premised on the fact that we are focused on … increasing the contribution of tourism to GDP from the current 12 or 16 percent to 25 percent by 2020,” he says.

In fact, the national development blueprint, Vision 2020, states that the country’s long-term goal is to record 500,000 annual tourist arrivals by 2020. The immediate plan is to make the tourism season year-round.

“The Gambian tourist season traditionally is November to April. Now, for the first time in the country’s history, the 2013-2014 season will start in October, instead of November. Furthermore, instead of the season officially ending in April, it will end in May,” says Roberts, adding that the country is not ready for a year-round tourist season.

Bah says there needs to be a clear strategy on how to ensure the country’s infrastructure and services are able to cope with this increase.

While tourism is on the rise, according to the United Nations Children’s Fund (UNICEF), sex tourism has also been on the increase here. A UNICEF study on sexual abuse and exploitation of children in the Gambia in 2003 revealed the country has a high rate of paedophilia.

The Gambia is signatory to the African Charter on the Rights and Welfare of the Child and the U.N. Convention on the Rights of the Child. And, the 2005 Children’s Act and the Tourism Offences Act 2003 protect children from sexual exploitation. But, according to the UNICEF report, the industry is difficult to police, as many families do not even view this as exploitative child labour.

A high-ranking source from the Tourist Guide Association, who did not want to be named, tells IPS he has come across many instances where families sell their children to sex tourists. He says that when he or the association tried to intervene, parents of these children refused to let them.

“They feel we are taking their living away from them. It has to do with poverty – we have to deal with the parents as well,” he says.

He adds that local NGO Child Protection Alliance has organised several programmes where different stakeholders in the hotel industry are trained on the issues of child sex tourism and what to do when they come across it. “I know of hotels that frown upon tourists entering their premises with young children.”

Bah agrees that the root cause of the sex tourism industry here is poverty.

“But it is very difficult because we’re talking about poverty and unemployment here. We all know … it is well stated that using the military to deal with the issue is not going to solve the problems ultimately.”