Green Economy Not Taking Off in Latin America 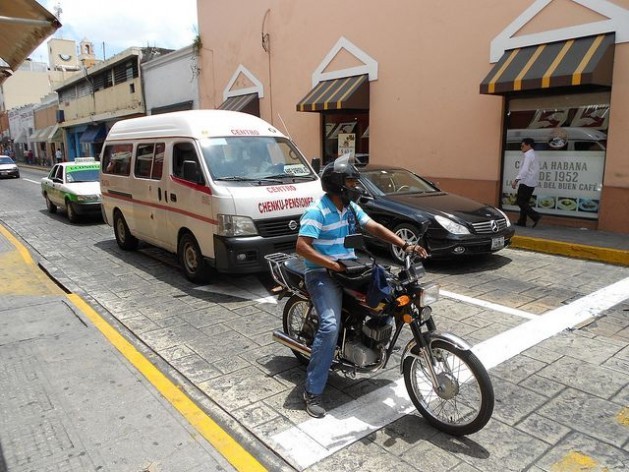 Reducing pollution in transport is key to sustainability. A street in Mérida, a city in southeast Mexico. Credit: Emilio Godoy/IPS

MEXICO CITY, Jul 3 2013 (IPS) - A year after endorsing the principles of the green economy at the Río +20 summit, Latin America is making little progress towards sustainable development models, according to experts.

The region “is generally in a precarious situation; although there have been efforts in public policy-making to integrate natural capital as an element in economic sustainability, there have been few cases,” Isabel Studer, director of the Global Institute for Sustainability (IGS) at the private Monterrey Institute of Technology and Higher Education, told IPS. “There is no comprehensive, cross-cutting approach.

“Countries have based their economic growth on the exploitation of natural resources, and this has aggravated a situation that was not particularly promising. Environmental sustainability has not been integrated in economic policy,” she said.

The IGS is taking part in a study led by the Economic Commission for Latin America and the Caribbean (ECLAC) on successful experiences in the green economy in developed and developing nations, set to be completed by the end of the year.

But what does “green economy” refer to?

According to the United Nations Environment Programme (UNEP), the green economy is “one that results in improved human well-being and social equity, while significantly reducing environmental risks and ecological scarcities. In its simplest expression, a green economy can be thought of as one which is low carbon, resource efficient and socially inclusive.”

UNEP says green investment can contribute to reducing demand for energy and water while reducing the carbon footprint of production of goods and services, besides contributing to the fight against poverty and social inequality.

¨We have to understand the conditions in the economy, and later which measures can be applied,” said UNEP representative in Mexico Dolores Barrientos. “First there has to be an analysis of the methods and priority sectors for moving towards a green economy.

“The main step forward is the recognition of failures in the economic system, which can eventually be overcome by means of better public policies, and that can include the main issues of the green economy,” she said.

“The future we want”, the outcome document adopted in June 2012 by Río +20 (the U.N. Conference on Sustainable Development) in Rio de Janeiro, considers the green economy one of the most important instruments for achieving sustainability, which can offer alternatives when it comes to policy-making.

At the same time, it recognises different approaches, visions and models, based on the specific circumstances and national priorities.
Governments, universities, NGOs and companies registered 741 voluntary initiatives in sectors like energy, transport, agriculture and health with the secretariat of the conference. Brazil registered 72, Mexico 47 and Peru 25.

By 2030, Mexico will require 64 billion dollars in investment in electricity, oil and gas, agriculture and forestry, energy consumption and transport to generate fewer polluting emissions, according to World Bank estimates.

The World Bank prefers to talk about “inclusive green growth” and puts the accent on experiences that are already being applied in many countries in the region.

But some governments, academics, and civil society organisations, especially in the developing world, argue that the green economy is turning nature into merchandise, without addressing deeper problems like poverty and inequality.

In the study “Development strategies of selected Latin American and Caribbean countries and the green economy approach: A comparative analysis”, UNEP studies the cases of Argentina, Bolivia, Cuba, Ecuador, Nicaragua and Venezuela, whose governments “have expressed major concerns about the concept of green economy.”

The report says that “Although most of the countries analysed have integrated into their development strategies certain elements that govern the relationship of humans and communities with the environment and the pathways for achieving sustainability, there is a gap between the position of the countries, often very innovative, which is expressed in the international arena, and their current development policies.”

“The challenge is to bring about substantial changes in the national economy, in an integral manner,” Studer said. “Public policies involve macroeconomic, financial, fiscal and innovation policies. The green economy can be a motor for redressing inequalities.”

The academic said “the green economy is not optional, because today´s problems are only getting worse. It offers opportunities for development of new industries, renewable energy, recycling of materials; but it requires a gigantic effort to include externalities in prices and evaluate opportunity costs.”

Mexico is completing a study on agriculture, natural capital, transport, water and green jobs, which could serve as input for policy-makers.
Other countries in the region are also beginning to study and analyse different sectors, from the point of view of the green economy.

“The key is for countries to accept the recommendations on the green economy and then carry out an important analysis on where the opportunities are for applying them, and do so,” Barrientos said.

The UNEP study says “it is necessary to establish international mechanisms that guarantee that a green economy will: contribute to poverty eradication, respect the sovereignty of nations, facilitate the conservation of ecosystems and biodiversity, and allow an equitable distribution of wealth”.