In Kenya, Small Is Vulnerable 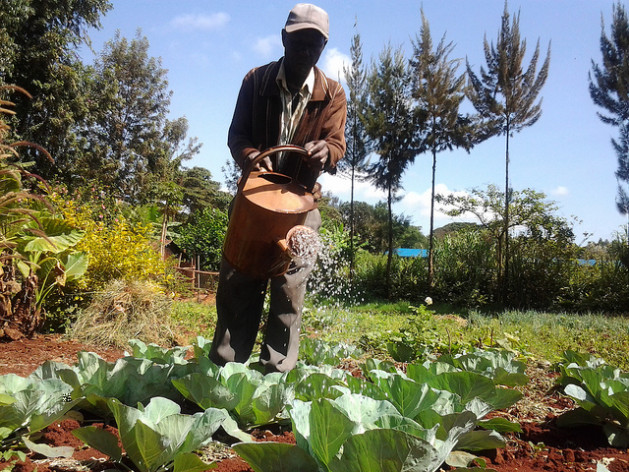 Kenya’s farmers - particularly small-scale farmers - face uncertain times due to extreme climate conditions as the country’s main sources of water are producing less than they did in the past. Credit: Miriam Gathigah/IPS

NAIROBI , Jul 15 2013 (IPS) - With the country’s food security and farmers’ livelihoods at risk from climate change, Kenya has divergent policy options. One is reliant on deploying new technologies as well as improving and expanding use of fertilisers and pesticides; while the other would turn to indigenous knowledge and the country’s natural biodiversity.

At stake is the survival of the country’s smallholder farmers in the face of unprecedented climate conditions.

According to the Ministry of Agriculture, an estimated five million out of about eight million Kenyan households depend directly on agriculture for their livelihoods. But Kenya’s farmers – particularly small-scale farmers – face uncertain times due to extreme climate conditions.

The data from the past growing season continues a worrying recent trend in which the country’s main sources of water are producing less than they did in the past.

The Food and Agriculture Organization of the United Nations’ (FAO) 2012/2013 country brief for Kenya reported that rainfall during the October to December “short-rains” season was well below average. Further, the brief said: “A series of dry spells also caused poor germination, increasing replanting needs (up to three times) and leading to wilting and drying out of crops.”

According to the Kenya Agricultural Research Institute (KARI), more than 10 million out of Kenya’s total population of 40 million is food insecure, with the majority of them living on food relief.

Tea, one the country’s leading exports valued at 1.17 billion dollars by the Kenya National Bureau of Statistics, is among the crops at greatest risk. Experts estimate that climate change could cost tea producers up to 30 percent of cash earnings.

“Tea is very sensitive to climate change,” Kiama Njoroge, an agricultural extension officer in central Kenya, tells IPS. “As a result, 500,000 small-scale farmers are facing uncertainties to their livelihoods.”

Joel Nduati, a smallholder farmer in central Kenya, adds: “Lack of information on interventions to cope with climatic change is our main problem.”

Nduati tell IPS that another problem facing farmers is water stress. “Too much water when we don’t need it, and then prolonged seasons of dry spells. What we need are varieties of crops that can withstand these changes.”

Yet according to Kosgei, interventions to combat climate change have already been developed; what is lacking is a way to effectively pass this information on to farmers.

“For example, the Tea Research Foundation of Kenya has developed 45 varieties of tea, but many farmers are yet to adopt them because they do not even know they exist,” says Kosgei.

Dissemination of this type of information is hampered by the lack of extension workers. Where the FAO recommends that there should be one extension officer to serve 400 farmers, currently, Kenya has just one extension officer for every 1,500 farmers according to the Association for International Agriculture and Rural Development.

Kenya’s small-scale farmers are producing only a fifth of what they could be, says the extension worker.

But not everyone agrees with Kosgei’s prescriptions. 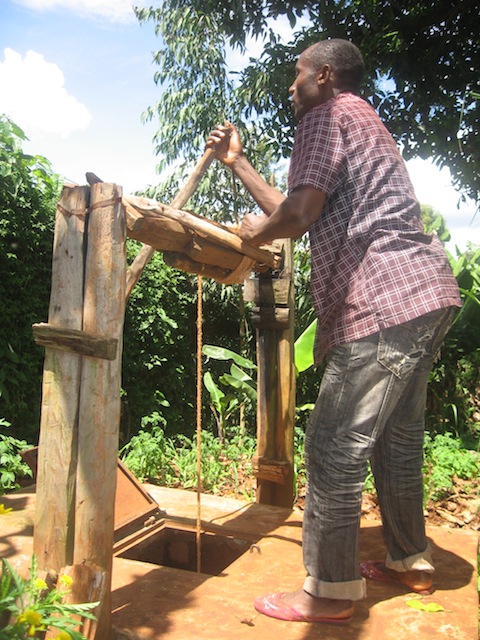 A farmer from Kenya’s central region draws water from a borehole to water his crops as rainfall patterns in Kenya continue to change drastically. Credit: Miriam Gathigah/IPS

“The solution is in reverting to indigenous knowledge which promotes a broad-based grass root agro-ecological movement. An approach that brings together strategies of farming that do not use chemicals,” Gathuru Mburu, coordinator of the African Biodiversity Network tells IPS.

“Farmers are producing inadequately due to overuse of chemicals. Agro-ecology uses animal manure. Leftovers from a previous harvest can also be ploughed back as manure,” Mburu explains.

But the agro-ecology option strikes some as turning one’s back on new technologies with enormous potential.

“Criminalising chemicals is not a solution. Farmers must embrace scientific innovations,” biodiversity researcher John Kamangu tells IPS. “We need genetic modification which will enable us to produce seeds that can withstand higher temperatures and heavier rainfall.”

But Mburu is against depending on large multinational agribusiness companies for strategies to combat climate change, warning that doing so has not borne fruit in Africa.

“African governments are abdicating their financial responsibility to the agricultural sector, creating room for multinationals to provide funding while at the same time exploiting Africa,” he says.

“These are the companies developing and selling chemicals. Their seeds tend to need lots of chemicals to grow. These seeds are also growing only in specific areas,” Mburu says.

Kosgei agrees, saying that these multinationals are about profit margins and not feeding Africans.

Mburu is further worried that in paving the way for multinationals, the government is adopting policies that will hurt the small-scale farmers who still produce at least 70 percent of the country’s food.

“Multinationals are behind various policies to criminalise the informal sector, in other words the small-scale farmers. Some of the policies in the pipeline are the seed law and the anti-counterfeit law,” Mburu explains. “The anti-counterfeit law is pushing for certified seeds. Our people who are using indigenous seeds (non-certified) will no longer be able to do so once this law takes effect.”

Mburu says that these seeds “have nothing to do with climate change. These seeds are controlled by six companies in the world and are a multi billion dollar investment and they are not suited to our ecosystem compared to indigenous seeds.”