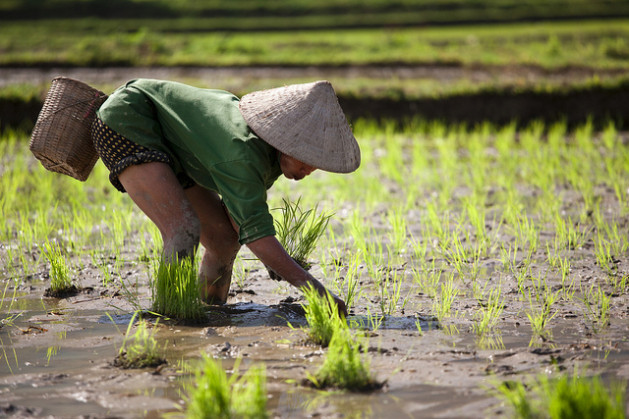 Rice is a staple for much of humanity. Credit: Bigstock

ROME, Jun 15 2013 (IPS) - “If there was enough political will to defeat hunger, we would defeat it right now – immediately,” says Enrique Yeves, chief of corporate communications at the U.N. Food and Agriculture Organisation (FAO).

“It is a scandal that in the 21st century there are still people that suffer from hunger in a world in which we produce more food than we need,” adds Yeves, speaking on the sidelines of the Jun. 15-21 FAO biannual conference opening Saturday in Rome.

"The crisis of the food system is not only an issue for poor countries in the Global South but for the global elites too.” -- IPC's Antonio Onorati

Almost one billion people do not have enough to eat, yet we throw away one-third to one-half of the food we produce, according to U.N. estimates.

This is one of the paradoxes at the core of the global food system.

The world made progress over the last decade in combating hunger. But a widespread and lingering economic crisis has reversed this trend, especially in sub-Saharan Africa, according to FAO’s own assessments. High and volatile global food prices are putting additional strains on the world’s poor, as is the rapid depletion of natural resources caused by our unsustainable way of life.

This year, FAO’s membership will hit 195, once South Sudan, Brunei and Singapore join next week.

The sense of urgency in addressing hunger in the midst of the multiple global crises is reflected in the current attempt to reform FAO in order to make it more efficient and results-oriented.

“In the 2000s, there was even talk of shutting down FAO altogether, as the mantra of liberalisation of markets as a solution for food security became dominant and the World Trade Organisation became the locus for most food talks,” says Antonio Onorati from IPC, the International Planning Committee for Food Sovereignty, a platform bringing together around 300 million small food producers from all over the world in order to dialogue with FAO.

“But then we had the economic crisis and the food crises and the governments understood there was a need for a multilateral space for dealing with food issues,” he tells IPS. “They also understood that the crisis of the food system is not only an issue for poor countries in the Global South but for the global elites too.”

FAO’s Brazilian Director General José Graziano da Silva has come up with a set of proposals, including concentrating the organisation’s work around five strategic objectives: contributing to the eradication of hunger, food insecurity and malnutrition; increasing and improving the provision of goods and services from agriculture, forestry and fisheries in a sustainable manner; reducing rural poverty; enabling more inclusive and efficient agricultural and food systems at local, national and international levels; increasing the resilience of livelihoods to threats and crises.

Another important change will be the mainstreaming of gender issues across FAO programmes, a move that is very much welcomed by civil society.

“Women are the majority of farmers yet they have always been discriminated in agricultural policies,” says Alberta Guerra from Action Aid International. “If women are given the resources they need, many will be taken out of poverty. We are happy to see the progress made by FAO on gender mainstreaming.”

Da Silva, who came to FAO after being responsible for implementing the Fome Zero programme in Brazil, said to have lifted 28 million people out of poverty, may indeed have the needed stamina and good reputation to carry the reform package through.

Yet there will likely be resistance from governments gathering in Rome. One contentious issue is a minor budget increase put up for discussion: FAO’s budget was 1.005 billion dollars in the 2012-13 period, and the organisation is now asking for an increase of one percent from its member states for 2014-15.

Some member states may resist this budget hike and these may be precisely the rich countries, as larger developing ones (most notably the BRICS: Brazil, Russia, India, China and South Africa) are already committed to increasing their financial contributions to FAO apart from the one percent: China by an additional 21.3 million dollars, Brazil by 15.3 million and Russia by 9.2 million dollars.

According to Onorati, the changes proposed by the FAO staff entail a “system view” of food issues – that is, looking at all factors together and interlinked – which is welcome. He also welcomes the organisation’s increased openness to civil society.

At the same time, Onorati warns that some of the national delegations coming to Rome may be less open than FAO itself to such changes.