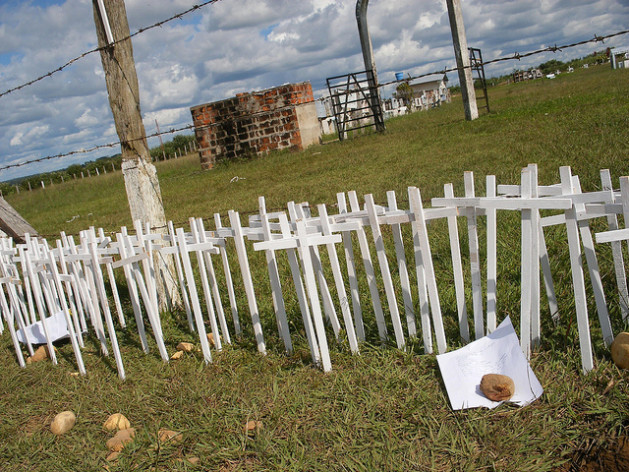 Hundreds of families hope the remains of loved ones forcibly “disappeared” in the war will be found in cemeteries full of unidentified bodies, like this one in La Macarena in central Colombia. Credit: Constanza Vieira/IPS

DOHA, Jul 25 2013 - Almost a quarter of a million Colombians have been killed in the country’s internal conflict since 1958, most of them civilians, a government-funded report has said.

The much-anticipated report was produced by the National Centre of Historical Memory, which was created under a 2011 law designed to indemnify victims of the conflict and return stolen land.

The law prefaced peace talks now being held in Cuba with the Revolutionary Armed Forces of Colombia, or FARC, the country’s main leftist rebel group.

The 434-page report, titled “Enough Already: Memories of War and Dignity”, says most of the killings occurred after far-right militias backed by ranchers and cocaine traffickers emerged in the 1980s to counter the FARC and other leftwing insurgent groups.

The report said that more than four out of every five victims were civilian non-combatants.

“We all deserve to know the truth, we all deserve to understand what happened in our rural areas and cities, and only then will we be able to say forcefully: ‘Stop!’ Colombian President Juan Manuel Santos said at the presidential palace on Wednesday, when the study was released. “Only in a Colombia without fear and with truth can we begin to turn the page.”

The government has been in peace talks with the FARC since November. While human rights violations have receded, the report painted a grim picture of bloodshed from the height of the conflict until 2012.

Colombia’s armed forces, backed by billions of dollars in U.S. aid, have used better intelligence and logistics over the last decade to combat the illegal armed groups, pushing their fighters deep into the country’s jungles.

“It’s a war that has left most of the country in mourning, but very unevenly. It’s a war whose victims are, in the vast majority, non-combatant civilians. It’s a depraved war that has broken all humanitarian rules,” said Gonzalo Sanchez, director of the centre, who presented the report to Santos.

In over half a century, the war killed 220,000 Colombians, more than 177,300, or 80 percent, of whom were civilians, according to the report. Another 40,787 members of the armed forces, paramilitary and rebels groups were killed in combat.

The 400-page study, packed with shocking photos of victims, was conducted in some of Colombia’s most volatile areas, where communities have lived in fear for decades.