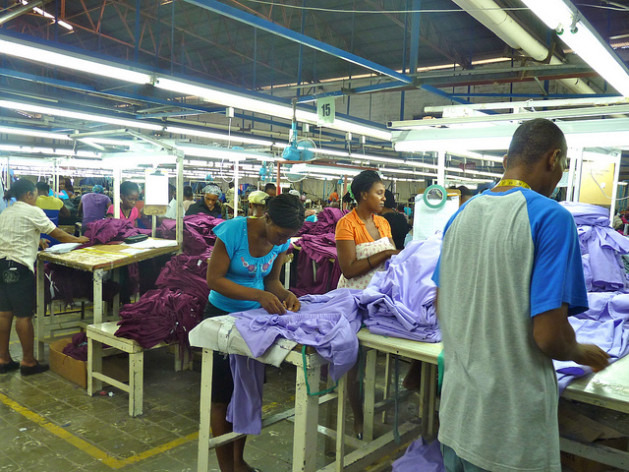 Workers arrive early in the morning at the One World Apparel factory in Port-au-Prince to assemble garments for export from Haiti. The current preferences list excludes several major sectors, including clothing. Credit: Ansel Herz/IPS

WASHINGTON, Jul 18 2013 (IPS) - A broad spectrum of interests are urging U.S. lawmakers to extend a law offering trade preferences to developing countries, slated to expire at the end of the month.

U.S. business lobbyists as well as development experts are stepping up calls to re-authorise the agreement, known as the Generalised System of Preferences (GSP), ahead of a Jul. 31 deadline. Failure to do so, advocates warn, would cost U.S. companies some two million dollars per day and likely lead businesses to shift contracts away from some of the least-developed countries covered by the GSP agreement.

“If you raise tariff levels for products coming from these countries, you will see business agreements shifting to other countries where the economics are more stable.” -- Daniel Anthony of the Coalition for GSP

While a bill to extend this system was finally introduced on Wednesday in a House of Representatives committee, those pushing for an extension are warning that these consequences will still come to pass if Congress chooses to act after the deadline, as lawmakers have done repeatedly in the past.

“We are so happy that the renewal process has taken this very important step,” Laura Baughman, executive director of the Coalition for GSP, a Washington advocacy group representing U.S. businesses, told IPS in a statement.

“[But] the clock is ticking more loudly as the days advance toward July 31. Not only will expiration adversely affect more than a hundred developing countries who use GSP, but it will hurt their U.S. customers and workers who use products imported under GSP to make other products in the United States.”

In the United States (other developed countries have similar agreements), GSP has been in effect since the mid-1970s, aimed in part at strengthening developing economies. Today, it eliminates tariffs on goods imported to the United States from some 127 developing countries, with additional coverage for 43 countries dubbed “least developed”.

The set-up provides for lower prices for imported products used by U.S.-based manufacturers or retailers. Foreign-made car parts, for instance, are an important item under GSP, which last year impacted on around 20 billion dollars’ worth of U.S.-imported products.

“Through GSP, some of the poorest countries in the world get a shot at sharing in the benefits of international trade,” Charles Rangel, a member of the House of Representatives and a co-sponsor of the re-authorisation bill, said Wednesday.

“It is vital to our commitment to promote economic development, democracy, worker rights, rule of law, and other fundamental values in the world. This is a programme that has received broad, bipartisan support virtually every time it has come up for renewal. We need to move on it now.”

Advocates worry that if Congress fails to re-authorise GSP by the Jul. 31 deadline, the resulting price hikes for imported products will severely impact on small and medium-sized businesses in the United States. In turn, this lack of pricing stability could lead companies to find more stable sourcing contracts elsewhere.

“If you raise tariff levels for products coming from these countries, you will see business agreements shifting to other countries where the economics are more stable,” Daniel Anthony, director of research and government relations at the Coalition for GSP, told IPS at a briefing last week.

“But unfortunately there’s no way to know the full effects of those decisions, given the vast number of factors involved.”

Unlike the vast majority of legislation moving sluggishly through the U.S. Congress today, GSP has historically enjoyed broad bipartisan support. Yet despite this support, the Congress has repeatedly re-authorised the system for just a few years at a time, thus leading to the current situation in which an already dysfunctional Congress is overloaded with work.

In terms of trade discussions alone, the U.S. is currently engaged in massive negotiations towards two huge free trade agreements, while several other trade bills are pending. On Wednesday, one of the primary authors of the re-authorisation bill, Congressman Dave Camp, stated that he hoped to get the GSP legislation done by the end of the year.

It is difficult to gauge the impact of the U.S. GSP on developing countries, partly because the United States has several other trade preference programmes. According to a report released in January by the official Congressional Research Service, total U.S. imports from all GSP countries has grown substantially in recent years, a trend that the report cautiously suggests could have helped create “some export-driven growth in developing countries”.

Yet the report also concludes: “for individual industries in developing countries, the positive impact of the GSP could be seen as quite significant.”

Very few are currently calling for GSP to be ended outright. But development advocates and some economists have been pushing for alternative trade preference schemes that could potentially have a far greater impact on the world’s least-developed economies.

The top five countries exporting goods to the United States under GSP, after all, are India, Thailand, Brazil, Indonesia and South Africa, nearly all currently considered “middle income”. Indeed, this is a fact that some members of Congress have increasingly pointed out amidst calls for reforms.

Indeed, the recent high-profile decision by the United States to rescind GSP preferences to Bangladesh in the wake of a series of incidents highlighting poor – even lethal – working conditions in that country’s massive garments sector was undermined by the fact that garments, which constitute some 90 percent of Bangladesh’s exports to the United States, were not actually covered under GSP.

“The administration should seek congressional approval for duty-free, quota-free market access for all least developed countries, with a safeguard for existing African clothing exports,” Kimberly Elliott, a trade and globalisation scholar at the Center for Global Development, a Washington think tank, wrote in a June letter to the new U.S. trade representative (USTR), Michael Froman.

“The aim should be to limit the benefits for already competitive exporters only as much as necessary to shield African exports.”

Thus far, there has reportedly been no substantive response to this suggestion from Froman’s office.

Elliott notes in a follow-up blog: “Since U.S. movement on duty-free, quota-free market access would also be a big contribution to making the meeting of trade ministers in Bali in December a success, I’m puzzled by USTR’s resistance to this.”