BANGKOK, Aug 22 2013 (IPS) - After working in Thailand legally for four years, many Myanmar migrant workers are facing an uncertain future in the coming weeks as their visas expire. Tired of the lack of security, they want the Myanmar government to improve the current labour agreement with Thailand.

The death of 27-year-old Soe Moe Kyaw’s father in 2010 drove the family’s rice planting business in Mandalay into a dire economic situation. Strapped for cash, his mother borrowed 8,000 baht (266 dollars) from her sister to pay a broker in Myanmar for Soe Moe Kyaw to travel across the border into Thailand. 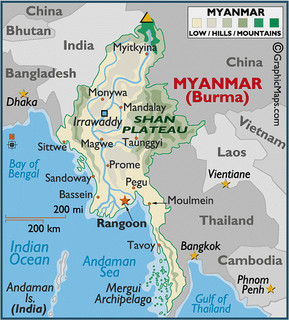 Nearly 80 percent of the estimated three million migrant workers in Thailand are from Myanmar. Credit: Daniel Julie/CC BY 2.0

Several months after his arrival, he found employment canning fish for 300 baht (10 dollars) per day at tuna canning factory Unicord in Mahachai. As the eldest of three siblings, Soe Moe Kyaw had dreams of earning enough money in Thailand to improve his family’s way of life.

“In the beginning, I thought that I could earn enough money to invest in a rice trade business in Myanmar, but the first few months of my salary went towards repaying my aunt. Even though I work eight hours per day and sometimes overtime, I only make enough to pay my sister’s education costs,” Soe Moe Kyaw told IPS.

“Since I entered the country illegally, I didn’t have proper documents, so I often had to hide in a room for fear of being arrested by the Thai police. As migrants, we face a lot of uncertainties because our jobs aren’t guaranteed, and even after paying a lot of money to become legal, we’re always threatened with losing our visas.”

Nearly 80 percent of the estimated three million migrant workers in Thailand are from Myanmar.

In a bid to curb undocumented migration, the governments of Myanmar and Thailand signed a memorandum of understanding in 2003 granting migrant workers the ability to apply for two-year work visas, with the possibility of a one time two-year extension.

Under the agreement, after a maximum of four years, workers are required to return to Myanmar for a period of at least three years before being eligible for re-entry.

In the coming weeks, hundreds of thousands of migrants – who underwent the process in July 2009 – will have to choose between leaving or remaining in the country illegally.

Economically, Myanmar is in no condition to absorb a return of so many workers from Thailand.

Last year, Myanmar migrant workers remitted an estimated 566 million dollars. A dent in this will hit families hard. Myanmar has a 37 percent unemployment rate, and more than 26 percent of the country’s population of 60 million lives below the poverty line.

Thirty-two year old Ma Cho is from the city of Myeik in Myanmar’s Tanintharyi Region. In 2003, she paid a broker 3500 baht (110 dollars) to cross the border into Thailand. She peels shrimp at 10 to 15 dollars per day.

Ma Cho’s family relies heavily on the money she sends.

“After paying for my living expenses here in Thailand I’m able to send around 200,000 kyat or 7,000baht (233 dollars) every two or three months. This keeps food on the table, pays for my daughter’s education and contributes to the new house my family is building for my daughter and I once I return,” Ma Cho told IPS.

“I would like to say to the Myanmar government that more then three million workers contribute to the country’s economy. The current labour policy with Thailand needs to ensure our rights and protection from exploitation.”

“Many workers would prefer to return to Myanmar because we miss being with our families, but life is very hard there,” 33-year-old Sue Soe Nwe told IPS. “I was working as a volunteer teacher in my village of Dawei but the salary of 700 kyat (one dollar) per month wasn’t enough to buy one shoe. We have no electricity or water system in my area and if we don’t have any money then we can’t go to school.

“If I could speak to the Myanmar government I would say that there should be no class discrimination based on whether an individual has a high-level or low-level education. Only those at the top are feeling the democratic changes but for everyday people nothing has changed.”

Better jobs need to be created in Myanmar, she said. “The government should clearly define the minimum wage and provide more security for working families. Currently the minimum wage is 1500 kyat (1.50 dollar) per day and this needs to greatly increase to a more fair standard so that people can really live and survive in our own country.”