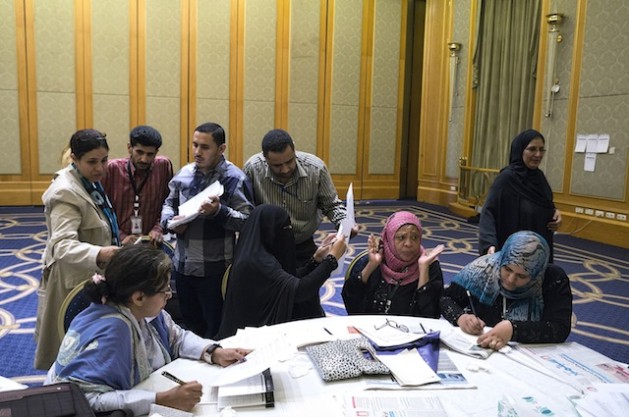 Members of the Rights and Freedoms Working Group at a meeting in Sana’a. Credit: Luke Somers/IPS.

SANA’A, Aug 16 2013 (IPS) - As he gets ready to go to a café in Yemen’s capital Sana’a, Husam tucks his long tresses inside a hood before getting into the back of his friend’s car.

“Still problematic,” his friend tells him, assessing him in the rear view mirror. Husam pushes his hair further inside. A short drive ahead, they stop at a checkpoint, one of the many that keep an eye on Sana’a’s heavy traffic. A soldier grabs a torch, shines it on Husam. His long lashes blink in the harsh light.

Husam, now 19, left home for good about a year ago, after having spent much of his childhood under semi-house arrest. “My family didn’t like my (feminine) looks,” he told IPS.

“In practical terms,” Brian Whitaker, former Middle East editor at The Guardian and author of Unspeakable Love: Gay and Lesbian Life in the Middle East, told IPS, “the biggest problem is the attitudes of families and society rather than the law itself.”

It’s not easy being gay in Yemen. The country’s conservative society has no place for them in its midst, the law sees homosexuality as a crime punishable by death, while the extremists take things into their own hands, killing homosexual men.

Some eight men have been killed on the streets of Yemen in recent months for being gay. The attackers are believed to be members of the al-Qaeda in the Arabian Peninsula (AQAP). Exerting control over most of south Yemen, AQAP members go about imposing their own laws on locals.

Killing people with homosexual orientation is part of the mandate they have set out for themselves.

A security officer and resident of al-Huta region in Lahj province, some 350 km to the southeast of Sana’a, confirmed to IPS the recent news of three youths killed by AQAP. The families of the gay men apparently informed the authorities, but no action was taken.

“Ansar al-Sharia has been working on killing them (gays), but the government has taken no action,” the security officer told IPS on condition of anonymity. There were similar killings of gays last year as well, he added, but they were not reported.

Yemeni law is governed by the principles of the Sharia. Under this Islamic law the punishment for sodomy, said Ahmed al-Hasani, a Yemeni writer and law graduate, is a whipping of a hundred strokes for each partner if they are unmarried, along with imprisonment of up to one year. If the presumed offenders are married, punishment is stoning to death.

The punishment for lesbianism is imprisonment not exceeding three years.

Letta Tayler, a senior researcher at HRW, told IPS, “We have raised this issue in writing and in direct advocacy meetings with Yemeni government officials, but have not received any commitment to changing the law.”

The U.N. Human Rights Committee and Amnesty International have also asked the Yemeni government to repeal laws which provide for, or could result in, prosecution and punishment of people because of their sexual orientation.

Fouad al-Ghaffari, an aide to Yemen’s minister of human rights, said the ministry is not aware of any communication from international human rights groups.

“We don’t have gays in Yemen,” he said, reiterating the official position on the subject.
The culture of denial continued at the complaints department of the ministry, where an official said he did not know of any records of prosecution or detention of any gay people.

However, as many as 316 gay men have been arrested in the last two years on charges of homosexuality, according to official reports obtained by IPS from a security source under condition of anonymity.

These arrests were made across 18 of Yemen’s provinces, with 95 cases in 2011 and 63 in 2012. Each case, explained the security officer, means the arrest of two gay persons.

Even advocacy for the LGBT community is considered profanity in Yemen, and treated as a crime. Local rights groups working for the community have to operate in anonymity. Homophobia creates its own obstacles, as with one group which has been trying to raise HIV awareness among people, including gays.

Established in 2007, this group estimates Yemen has close to 35,000 people with HIV, though there is no specific number for gays. Their outreach programme involves providing training courses for the prevention of sexually transmitted diseases, including HIV, as well as conducting free HIV tests.

But, as an official from the group says, “The majority of the gay community has no idea of the health risks associated. The illiteracy rate [among gays] is high; there are gays who have no idea what a condom is.”

“Being visible is the first step!” Twenty-three-year-old Ala’a Jarban, a young activist, declared his homosexuality a couple of months back on his blog. At the forefront of the 2011 youth movement in his country, Jarban is now in Canada, paying the price for his openness by seeking asylum.

“I’m angry at all this institutionalised violence against our existence,” he had said on his blog, “angry for being fated to death by strangers, by those in power in governments.”

“Although a lot of comments about Ala’a have been hostile, things like this do help break down taboos about discussing homosexuality and, in the longer term, can lead to people questioning homophobia,” said Whitaker.

He and others hope that the new Yemeni constitution being shaped during the two-year transition period will include some human rights clauses.

But the committee tasked with recommending and receiving freedom- and rights-related laws said no one has brought up the subject of homosexual rights so far.

“No one has suggested we endorse such [homosexual] rights, neither have we done so ourselves,” Arwa Othman, chairwoman of the Rights and Freedoms Working Group, one of the nine groups of the National Dialogue Conference mandated with the shaping of a new system for Yemen, told IPS.

“There is no way to discuss it,” Othman, a longstanding voice against Islamists, said. “Basic rights issues, which the West had tackled some 200 years ago, are still being debated and discussed now.” But also, she added, “many EU countries still impose a ban on gay marriage, after all.”