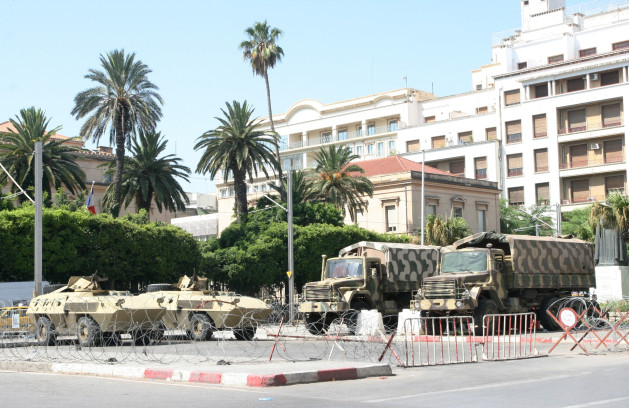 The military on standby in central Tunis. Credit: Louise Sherwood/IPS.

TUNIS, Aug 13 2013 (IPS) - Tunisia was plunged into political strife when opposition leader Mohamed Brahmi was assassinated late last month, triggering widespread pro- and anti-government demonstrations across the country. In the days since his death the North African nation has faced a further series of terrorist attacks that have threatened to destabilise a country seen as a model for post-revolution democracy in the region.

Four days after Brahmi was shot dead outside his home in Tunis on Jul. 25, eight Tunisian soldiers were brutally killed in Islamist militant attacks against the army. Since then, more soldiers have died in clashes, bombs have been detonated in and around the capital Tunis, and terror suspects have been killed and arrested in police raids.

Police claim to have foiled another assassination attempt against a political figure in the city of Sousse. The target was not named.

"Since the revolution two important clients, an American investment fund and a tour operator that owned two hotels, have pulled out of Tunisia."

Sheikh Abdelfatteh Mourou, vice-president of the government’s dominant ruling party Ennahda Movement, told IPS: “We have no history of terrorism in Tunisia. We’re not ready for such attacks. We must strike the terrorists.

“Terrorism has no nationality. Terrorists don’t see people as victims of a particular country, they see them only as enemies. They search for the weakest link in the chain, a country that just came out of a revolution, that lacks stability, where the government isn’t strong enough. That’s us now.”

Felix Tusa from the Geneva Centre for the Democratic Control of Armed Forces, a non-profit organisation that works with the Tunisian government on security sector reform, told IPS: “The politicians controlling the ministry of the interior have changed, but there have been very few changes in the security apparatus itself.

“The biggest challenges are a lack of funding for salaries and equipment and how to develop an intelligence service that is effective, whilst also being transparent and respecting human rights. One of the main criticisms of the democratic transition process has been a lack of security sector reform.”

The surprise resignation of army chief Gen. Rachid Ammar in June was attributed in part to the problems within the ministry of the interior. In the announcement of his departure on national television, Ammar stated that the lack of a functioning intelligence service was preventing effective military operations.

Minister of the interior Lotfi Ben Jeddou renewed his commitment last week to tackle terrorism along the Algerian border. “Military and security operations will continue until all terrorists holed up in the mountain are extirpated,” he said in a statement.

The ministry has come under fire for investigations into the murder of Chokri Belaid, another opposition politician who was shot six months ago, with the same gun as Brahmi, as he left his house. The ministry was criticised for taking too long to identify suspects, and when it did, for failing to arrest them. “We will soon compensate for this failure by a massive mobilisation of agents to capture these terrorists,” the minister said.

Marking six months since Belaid’s assassination, tens of thousands of Tunisians turned out Tuesday last week to call for the government to step down. The march was on the same day the National Constituent Assembly, which is writing the new Constitution, suspended its work until dialogue takes place between the government and opposition.

A large pro-government rally had been held a few days earlier, but this was the biggest anti-government demonstration since Brahmi’s murder. The now familiar cries of “dégage!” (get out!) were stronger than ever.

Ines Karaoui came to the protest with her husband and two young children from Sfax, which is a three-hour drive from Tunis. “It’s a national duty to come. I won’t sleep tonight but people have lost relatives and children have lost their fathers. It’s nothing to sacrifice a few hours of sleep compared to the sacrifice of soldiers who had their throats cut.

“Tunisia is bleeding, we have cried tears of blood for our Tunisia. We love our country and we want a future for our children. We don’t want to be like Afghanistan or Syria…The government wants people to feel that the terrorist threat is very close to Tunisia but they are the ones behind this. We are anti-extremism. We want to take back our Tunisia.”

Commenting on the accusations against the government, Mourou told IPS: “That’s not true. They [the opposition] know that Al-Qaeda, Ansar al-Sharia and the Salafists are not Ennahda…we are all Muslims but we do not follow the same programme.”

Others in Tunisia question whether even these groups are to blame. Sheikh Mohamed, an Islamist and professor of theology who spent seven years as a political prisoner under dictator Zine El Abidine Ben Ali’s regime, told IPS: “Salafists have been blamed for the terrorist attacks but it is not certain. Perhaps members of the old regime or foreigners are responsible.

“Many Salafists are peaceful but some are violent and infiltrate mosques and there are also Salafist jihadists. I support Shari’ah law and want Islam to be prominent in the new constitution but I also want democracy and refuse all violence.”

As each day brings new stories of attacks at the borders, bomb threats and assassination plots, Tunisia’s economy is also taking a hit. Both tourists and investors are being frightened away, and with them the economic lifeblood of a successful democratic transition.

Mehdi Zaoui, an international business lawyer, told IPS: “Since the revolution two important clients, an American investment fund and a tour operator that owned two hotels, have pulled out of Tunisia. I also have three or four clients who were thinking about investing in the country in the industry and IT sectors who are reconsidering.

“I had a meeting with an Italian client working in the chemicals industry asking me about the situation here. They have already spent a lot of money in the country but they are scared about their investment.”

The government is stepping up efforts to combat terrorism. The perceived insecurity and instability may yet pose the greatest threat to Tunisia.