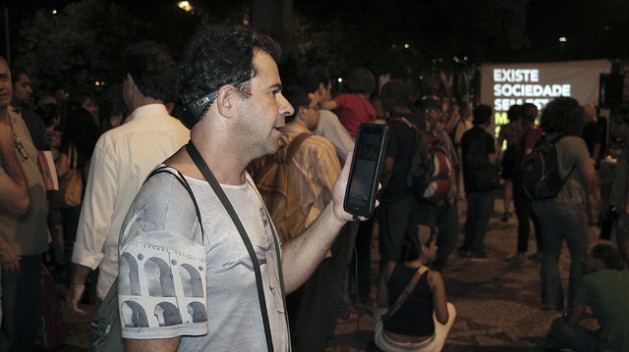 Cazú Barros participating in and reporting on a street protest in Rio de Janeiro, using a tablet. Credit: Fabiana Frayssinet/IPS

RIO DE JANEIRO, Sep 30 2013 (IPS) - The citizen journalists of Midia Ninja, who have covered the protests that broke out across Brazil in June right in the thick of things, are part of a new kind of reporting: one that is proud to be biased.

Just before the start of one of the latest protests, on Friday Sept. 20, “ninja” journalist
Cazú Barros said he was worried that he needed a spare battery for his cell-phone, because he had to provide hours of live stream coverage of a debate outside the Rio de Janeiro legislature.

His equipment contrasted sharply with that of reporters from large radio and TV stations – who were not there, however, because of the mainstream media’s lack of interest in this kind of news.

Barros has just a small camera on his 3G tablet, and uses an Android streaming app to provide live coverage.

“What strikes me the most about Midia Ninja is the way people search us out, because of our credibility,” he told IPS. “They don’t trust the traditional newscasts anymore, because they are tired of being manipulated.”

Ninja – an acronym for “independent narratives, journalism and action” in Portuguese – emerged two years ago in the southern Brazilian city of São Paulo as an initiative of the Fora do Eixo (off-axis) network of independent music collectives.

But it achieved unexpected visibility with the outbreak of the protests, which were triggered by bus and subway fare hikes but later expanded to target the political system, corruption and shortcomings in the health and educational systems. Many of the protesters are middle-class, and the demonstrations have come at a time of relative prosperity and declining poverty.

The Ninja protesters do not hesitate to follow and film a presumed police infiltrator or provocateur among the crowds of demonstrators.

Through their live streaming, the activists-cum-journalists secured the release of a demonstrator who was wrongly arrested on charges of throwing a Molotov cocktail, because their footage proved he was innocent.

Midia Ninja’s work has also helped curtail police brutality because their “eyes”, which are everywhere, have shown the police beating peaceful protesters.

“That was always our concern – providing a specific narrative of how we are feeling the streets as reporters,” said Felipe Peçanha, one of the founders of Midia Ninja, who was taken into custody for supposedly “inciting violence” but was released due to lack of evidence.

But Midia Ninja’s 200 volunteer citizen journalists covering events in Brazil’s main cities are not on their own. They have the support of their followers on the Twitter social network who, citing the @MidiaNINJA account, send out tweets, warning for example when riot police are approaching a certain spot.

“This is a form of media that has more freedom to tackle issues in a more integral manner,” one of the group’s followers, a student named Thiago Cavalcante, told IPS. “It doesn’t show just one side, as absolute truth, but presents all of the facts, and it lets the viewers put together their own reality, based on the images.”

Some have thrown stones at the offices of Rede Globo, Brazil’s main TV station which is one of the biggest in Latin America, and have booed its journalists. In addition, broadcast vehicles of two other stations, SBT and Rede Record, were set on fire.

“The bias of the press has been challenged, because through the protests, Brazilian society has seen the media consortiums’ game of interests more clearly,” Peçanha said.

“This became visible through the alternative coverage, but the protesters also saw it for themselves,” he added.

“After coming back from a protest, many would turn the TV sets on in their homes and see a very different story than the one they had witnessed themselves. And they started to understand that ‘something is wrong here’.”

Midia Ninja and others involved in this fast-growing form of reporting see journalistic neutrality as a big lie.

Peçanha makes no secret of the fact that his aim is to accompany the social movements, which historically have not had a voice in most of the mainstream media.

He argues, however, that the big media outlets are not “impartial” either, but answer to their own interests or those of the economic powers they represent – although less transparently, he says, than the new citizen journalists.

“Our work highlights the bias of the press, which should be increasingly evident, so people can have more honest contact with the news,” he added.

Analysts attribute this loss in ratings by Brazil’s main newscasts to the explosion in Internet use and the number of online news sources, along with the drop in credibility of mainstream news coverage.

“They are losing credibility and ratings, and as a result advertising, even during primetime news programmes,” media analyst Rachel Boechat, a Midia Ninja collaborator, told IPS. “That means the impact of public opinion is important, because the Internet user is also an opinion-maker.”

Boechat said citizen journalism makes “a crucial contribution to the democratisation of information and breaks with the homogeneous discourse of the media in Brazil, which have become highly concentrated bodies representing political, party and economic interests,” she said.

Vinicius Braz, the adviser on social networks at the Brazilian chapter of Germany’s Konrad Adenauer Foundation, said this kind of journalism forms part of other evolving changes. “That old world, defined by a state and a system of communications, is breaking up little by little,” he remarked to IPS.

In that respect, he said, what stands out about Midia Ninja is having brought to light a larger phenomenon: “People are realising that they can produce their own reports and share them in real time, and that they don’t have to be a journalist to do so.”