It can take decades after the last sighting of a species for it to be declared extinct. 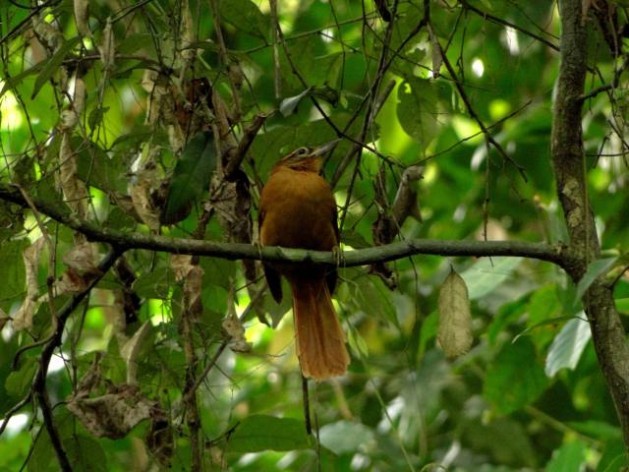 CAJÍO, Cuba/RIO DE JANEIRO, Nov 11 2013 (IPS) - The extinction of a single species (a fish off the coast of Cuba, a bird in the Brazilian forest) creates a void that can trigger a whole series of repercussions, from the alteration of ecosystems to increased hunger.

“I can sum it up for you in one sentence: there is less of everything,” says fisherman Lázaro Andrés Gorrín. He earns his living from the waters of the Gulf of Batabanó, which bathe the coast of his humble fishing village, Cajío, in southwest Cuba.

Fishing is the traditional lifeblood of more than 577 coastal towns and villages in Cuba, but it is an endangered livelihood due to reduced fish stocks throughout the country.

“Now it takes a whole day to catch enough fish just to cover the bottom of the cooler, which means very little income,” said Gorrín as he showed Tierramérica the few tiny lane snappers (Lutjanus synagris) he had caught that day. “You can’t support a family with this,” added his wife, who was waiting on shore for him to help carry his catch home.

Overfishing is the main cause of the decreased stocks of lane snappers in the Gulf of Batabanó, as well as the almost complete disappearance of the Nassau grouper (Epinephelus striatus) throughout its entire habitat, among other losses.

The decline in fish stocks has been highly evident since 1990. Other contributors include pollution, rising sea temperatures, and higher salinity, since the damming of rivers results in less fresh water flowing to the Cuban coasts.

The size of the fish has diminished, and the species less popular among the population have become more predominant, according to research by marine scientist Rodolfo Claro.

That is why Gorrín, 41, and other coastal fishermen are “seriously thinking” about plying their trade in rivers, lakes and reservoirs or even seeking out new ways to make a living.

Some of them, however, believe they are too old to give up the livelihood passed down to them by their ancestors.

This is the case of Roberto Díaz, 53, who works alongside Gorrín. The two men head out daily in a small motorboat to an area roughly 40 miles off the coast of Cajío, where they fish with nylon fishing lines and rustic trammel nets.

“I’m still here even though it gets harder to make a good income every day. There are also a lot of regulations. There’s a ban on catching a number of different species, and on using certain equipment and methods,” Díaz told Tierramérica.

Fifteen years ago, Gorrín and Díaz, members of a fishing cooperative, went out on rafts and filled their cooler every day with snappers, groupers and other fish species that abounded in the area. 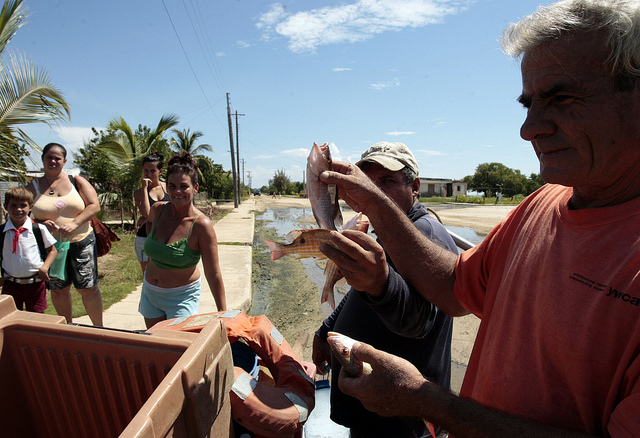 But the waters around Cuba were seriously overfished between the 1960s and 1980s.

In 1985 alone, 78,000 tons of fish were harvested off the country’s coasts. Since then, and in the midst of the economic crisis that began in the 1990s, the fishing sector has shrunk and prohibitions have been established for certain areas and species.

In 2007 the use of seine nets was banned because of the destruction they caused to the marine habitat.

Since there are very few formal jobs in fishing, there has been an increase in informal and subsistence fishing activity, which also takes a bite out of fish stocks. Sometimes it is clandestine, while in other cases it is legalised as sport fishing.

Tierramérica talked to an electrician from the municipality of Quivicán, near Cajío, who goes out fishing on the weekends to supplement his family’s diet, using a tractor tire inner tube as a raft. He cannot venture more than 400 metres offshore, he noted.

“Even if I wanted to, I couldn’t only do this for a living,” explained the electrician, who asked to remain anonymous. While fishing began as a hobby for him when he was boy, today it serves a more essential purpose: putting food on his family’s table. “I don’t know if what I do is legal,” he commented.

The life support system that generates the planet’s air, water and food is powered by an estimated 8.7 million living species. Very little is known about a large share of them. Some become extinct before we even know they exist; others, when they have just been discovered.

Farewell to a natural means of insect control

A few thousand kilometres south of Cajío, in the Atlantic Forest of northeast Brazil, the bird known as the Alagoas foliage-gleaner (Philydor novaesi) is no longer seen. Measuring 18 centimetres long and reddish-brown in colour, the bird was first discovered in 1979 in the state of Alagoas.

Back then, the species was “relatively easy to find” on the edges of clearings in the forest, said biologist Tatiana Pongiluppi, project coordinator at the conservation organisation SAVE Brasil, which forms part of the BirdLife International global partnership.

Its name derives from the fact that it “gleans” its food – primarily insects – from leaves, bark, crevices and debris.

Surveys conducted in 1992 and 1998 revealed that the species had already become rare. And it was sighted for the last time on Sep. 13, 2011, when it was filmed by photographer Ciro Albano.

The Alagoas foliage-gleaner played an important role in controlling the insect population. It also attracted bird watchers from around the world, thus generating tourism-related income.

In 1998 only single individuals of the species were observed. In 2000, just four of them were found in the Pernambuco Endemism Centre, an area rich in biodiversity north of the São Francisco River.

The main cause of the bird’s disappearance is deforestation, driven by a number of factors: the expansion of sugar cane plantations, charcoal production, and the harvesting of timber for the furniture industry, Pongiluppi told Tierramérica.

Their natural habitat is in areas with tall trees and large quantities of bromeliad plants, whose dried leaves provide the small birds with an abundance of food.

The Atlantic Forest once extended along the entire length of Brazil’s Atlantic coast, from the far north to the south, and included portions of eastern Paraguay and northeast Argentina. It covered a total area of 1.3 million square kilometres.

Today barely seven percent of its original forest cover remains, yet is still one of the planet’s greatest storehouses of biodiversity, with 20,000 species of plants, 849 of birds, 370 of amphibians, 200 of reptiles, 270 of mammals and 350 of fish.

There is not a single specimen of Philydor novaesi living in captivity. “They are insectivores, and no techniques have been developed to keep and breed them in captivity,” explained Pongiluppi.

Officially, the species is considered “critically endangered”. Extinction can only be declared when there is no doubt that the last living specimen has died, and that can take decades.

“We cannot state with authority that the individuals sighted in recent years have died, because we have no proof. But there have been no recorded sightings of this species since 2011, despite the efforts of ornithologists and bird watchers,” who have made numerous trips to the area in search of the bird, said Pongiluppi. The same unfortunate fate awaits a number of other bird species in the region.

Embattled by erratic weather and a persistent disease that has decimated the area’s coffee plantations, indigenous women in the province of Lamas, in the Amazon rainforest of northern Peru, did not sit back and cry over the loss of the crops that allowed their grandmothers to put food on the table. They set out to save them.

The women sought support from the Federation of Kechwa Indigenous Peoples of the Region of San Martín in order to revive the planting of two species of tubers, sachapapa (Discorea trífida) and dale dale (Calathea allouia), a root vegetable, michuksi (Colocasia esculenta), and the oilseed sacha inchi (Plukenetia volubilis).

In numerous villages “the seeds for these crops had completely disappeared, and they had to be obtained in other communities, sometimes far away,” notes a report from the humanitarian organisation Oxfam, which provided funding for this initiative, launched in 2011.

On half-hectare plots, the women plant sachapapa, dale dale and michuksi, which take a year to be ready to harvest, alongside other food crops with shorter growing cycles: peanuts, corn, beans and leafy vegetables.

The elders in each community helped to revive the traditional farming methods and to design an agricultural calendar. The women, organised in “mothers clubs”, elected a coordinator for each village.

While the initial plan was to grow food for their own families, the women realised that in the city of Lamas there was a demand for the traditional dishes “that grandma used to cook,” and they decided to promote the newly revived agricultural diversity at regional food fairs and competitions.

The community of Chumbakiwi, with a population of around 330, took first place at the inaugural fair by presenting 79 different crop varieties.

Each village decided what to do with the income earned. Some of them created a fund in order to acquire more seeds and continue to preserve them.