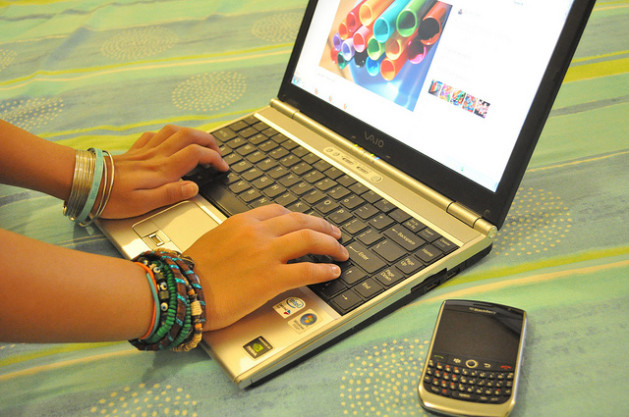 Western tech companies are often confused as to what type of digital products they are actually allowed to unblock in sanctioned countries. Credit: Zofeen Ebrahim/IPS

WASHINGTON, Dec 6 2013 (IPS) - Aliakbar Mousavi is a former member of the Iranian parliament and an internet freedom and human rights advocate now living in Washington, DC. In 2006, he was arrested and jailed by the Iranian government for urging human rights reforms.

But the authorities are not the only ones to shoulder blame for quelling dissent, he says. Mousavi told IPS that the U.S. sanctions imposed on Tehran over its nuclear programme are also stifling freedom of expression in his country.

“There is really no reason why U.S. sanctions should be inadvertently doing the work of oppressive governments.” -- Danielle Kehl

“People in Iran are suffering because of technology-related sanctions. After the 2009 revolution, Iranians were being arrested and had their private e-mails and information exposed,” he said.

The problem, activists say, is that even though the U.S. government has recently created some exceptions to protect the flow of information in sanctioned countries, regulations are still unclear.

This has led to a situation in which U.S. and other Western tech companies are confused as to what type of digital products they are actually allowed to unblock in sanctioned countries.

“One of my friends, who is also an influential person in Iran, was jailed and accused of conspiring against the regime,” Mousavi said. “After they arrested him, they got hold of his e-mails and showed them to him. He simply couldn’t deny their accusations, even though his e-mails were private.”

Mousavi said that those e-mails came from a Yahoo account. After these incidents, together with a group of Iranian activists, he tried to convince Yahoo to protect their personal information from the Iranian government at the time.

After nearly three years of exhortations, he said, Yahoo’s new president took charge and the company agreed to put in place new protections. At the same time, he noted, Iranians are still finding it difficult to open e-mail accounts because of sanctions still in place.

Last month, Iran and a group of six world powers that includes the U.S. struck an interim nuclear deal to ease sanctions on the Iranian government in return for a partial freeze of nuclear activities.

However, looking at the broader picture, experts here are urging the U.S. government to better protect internet freedoms when it imposes sanctions on countries with questionable human rights records, such as Iran.

“There is really no reason why U.S. sanctions should be inadvertently doing the work of oppressive governments,” Danielle Kehl, a researcher at the New America Foundation (NAF), a non-partisan think tank here, said Thursday at the launch of a new report that criticises some aspects of the U.S. sanctions approach in Iran and beyond.

Kehl points to how unclear sanctions regulations have curtailed the ability of ordinary citizens to share and access information over the internet in countries where U.S. sanctions are in place.

“Expression that seems most threatening to the state is not political manifestos on democracy, but exposés on the foibles and corruption of leaders,” Suzanne Nossel, the executive director of the PEN American Centre, an advocacy group advancing free expression, told IPS.

“This reality is much more troubling under repressive regimes like those in Syria, Iran and North Korea, where people can be killed or jailed for speaking out.”

“Companies that could be taking advantage [of the exemptions] aren’t doing so, because they see it as too perilous because of all the risks, and as generally not being in their economic interest,” he said.

According to the report, the problem is that “the lack of legal clarity and fear of political or economic repercussions often discourage American companies from attempting to export their products to sanctioned countries.”

“Some specific examples include Google apps, mobile apps, Skype credit, or antivirus programmes such as McAfee and AVG,” the NAF’s Kehl told IPS.

Although the U.S. government currently imposes comprehensive sanctions on a set of different countries, including Cuba, North Korea, Sudan and Syria, much of the discussion has focused on Iran, partially because of the recent nuclear deal and the country’s history of stifling freedom of expression.

“Sanctions regulations in some cases effectively aid repressive regimes that seek to control access to information within their borders,” the report argues.

In recent years, the U.S. government and Congress have enacted some legislation and regulations that would facilitate the provision of technology in sanctioned countries.

In May 2013, the U.S. Treasury Department published a new license that allows companies to export software and services to Iran that are “incident to the exchange of personal communications over the internet, such as instant messaging, chat and e-mail … sharing of photos and movies, web browsing, and blogging.”

Although the license (known as General License D) does grant greater internet freedoms for Iranians, experts note a continued lack of clarity, especially when it comes to the difference between an exemption and an authorisation.

“Congress needs to show more flexibility in the way it issues exemptions, because that will leave more room for executive agencies … to issue adequate safeguard regulations such as General License D,” Kehl told IPS.

“Remember that simply authorising a product doesn’t mean that people can actually use it,” Mousavi told IPS.

“So far, Iranians have been able to use free software but can’t use most of the important ones – like antivirus and security programmes – that come with a payment, because these companies are still not allowed to process payments coming from Iranian accounts.”

“What we need,” he continued, “are more clarifications and executive orders coming from the U.S.” that would allow ordinary Iranians to express themselves freely.