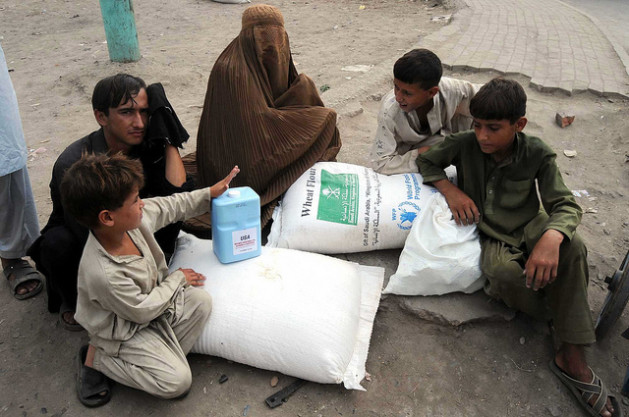 A woman sits in front of a camp after receiving oil and wheat from a U.N. distribution centre in Peshawar. Sixty percent of Pakistan’s population lives below the poverty line. Credit: Ashfaq Yusufzai/IPS

WASHINGTON, Dec 18 2013 (IPS) - The World Bank has raised some 52 billion dollars, a record amount, for its fund for development in the world’s poorest countries, though some are expressing concerns over the terms under which some of this money is being offered by donor governments.

The bank made the announcement Tuesday in Moscow, where donors wrapped up a two-day pledging summit to top up funding for the International Development Association (IDA), the arm of the Washington-based development institution that focuses on boosting development among the poorest of the poor in 82 countries.

“Global cuts to aid are costing lives, so the news that donors have made generous contributions to this fund for the world’s poorest is very welcome news." -- Nicolas Mombrial of Oxfam

World Bank Group President Jim Yong Kim called the effort a “success for the global community”, with the amount constituting around the midpoint of what bank officials had hoped to raise.

“The World Bank continues to show that it is very good at fundraising for IDA,” Scott Morris, a former U.S. Treasury official coordinating U.S. engagement with the World Bank and currently a visiting fellow at the Centre for Global Development, a think tank here, told IPS.

“The dollar amount is a big one and represents a strikingly positive outcome for such a tough budgetary environment for the largest donors.”

Because of the types of countries with which it works, IDA gives out around 20 percent of its funding in grants, with the rest reserved for low-interest loans. As such, the programme’s funding is used up and must be replenished by donor countries every few years.

The Moscow summit this week was the 17th such replenishment, and the funding raised during this round is expected to last for three years, after it is phased in around mid-2014. This timeframe will include the post-2015 period, when the world is slated to set new aims for global development in the aftermath of the Millennium Development Goals (MDGs).

The World Bank says the current replenishment will be used to increase focus on climate change and gender equality, as well as to boost efforts to ensure equitable growth.

The money should go for “electricity for an estimated 15-20 million people, life-saving vaccines for 200 million children, microfinance loans for more than one million women, and basic health services for 65 million people,” the bank says. “Some 32 million people will benefit from access to clean water and another 5.6 million from better sanitation facilities.”

IDA will now be at the vanguard of the World Bank’s new plan to end extreme poverty by 2030, as unveiled by Kim earlier this year.

Yet with the after-effects of the global economic crisis continuing to roil traditional donor governments, it was unclear whether they would meet bank expectations. Just 46 countries pledged funding in Moscow, for instance, down from 51 during the last replenishment, in 2010 (though this could change slightly in coming months).

In anticipation of constricted purse strings, bank officials this year tweaked traditional guidelines. While in the past donor governments have contributed to IDA only through grants, this year they were offered the option of making contributions through concessional loans.

A bank spokesperson told IPS this option was offered “to provide contributing countries a way to increase their contributions to IDA, and ultimately for IDA to increase its ability to finance more investments in the poorest countries.”

The spokesperson, who noted the decision was taken only due to current “exceptional circumstances”, said a bit more than four billion dollars was pledged as loans, which will eventually have to be paid back. Given that donors typically make up only around half of the total replenishment (other arms of the World Bank Group and repayment of previous IDA loans make up the rest), this four billion dollars is thus a significant portion of the new replenishment.

“Global cuts to aid are costing lives, so the news that donors have made generous contributions to this fund for the world’s poorest is very welcome,” Nicolas Mombrial, who heads the Washington office of Oxfam, a humanitarian group, said Tuesday. But he cautioned that the new funding approach “is acceptable in a context of economic crisis, it should be a temporary fix and not a permanent way of operating.”

The bank notes that concessional lending has always played an important part of its financing structure.

“IDA has traditionally offered countries both loans on highly concessional terms as well as grants,” the spokesperson said.

“The low interest rate charged, the long maturities, and use of a ‘grace period’ amount to a large subsidy from donors to IDA. Increasing the pool of available financing actually increases our ability to have a stronger impact in poor communities.”

Further, CGD’s Morris notes that donor governments have been “very attentive” that loans do not supplant the grants that continue to make up most of IDA’s funding. He also says that the new funding structure will allow for a balance in terms of the varying dynamics among the countries IDA is assisting, particularly in the context of growing middle-income economies.

“They’re at a point in time where they have a large group of low-income countries with compelling financing needs, but over the medium term we’ll also see graduations of some of these countries – for instance, India – that implies less need over time,” he says.

“In this way, they’re able to keep things roughly in balance for IDA. While on the one hand they’re mortgaging their future to some degree, they’re doing it smartly.”

Jim Kim has suggested that middle-income countries made up a significant portion of IDA’s new replenishment.

Others are focusing new attention on how exactly the bank is planning on using some of this new funding. Ahead of the Moscow summit, civil society groups in several major donor countries warned that recent policy documents have suggested that the bank is planning to increase its focus on major energy infrastructure, including large-scale dams.

This runs in the face of strengthening calls by some development experts for multilateral funders to focus instead on alleviating poverty and increasing resilience through small, local energy-generation options.

“We will monitor closely whether the World Bank invests its IDA funds into projects that can reduce poverty, or in mega-dams and fossil fuel projects that destroy the environment and don’t benefit poor people,” Peter Bosshard, policy director at International Rivers, an advocacy group, told IPS.

“We will encourage national parliaments to hold the World Bank to account for its lending decisions under IDA 17, and to shift resources to institutions better placed to reduce poverty if the Bank continues to support destructive energy projects.”