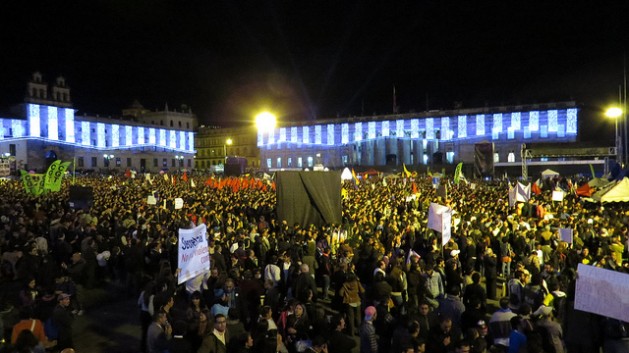 Thousands of demonstrators have been protesting in Bogotá’s Plaza de Bolívar against the removal of Mayor Gustavo Petro over his Zero Garbage programme. Credit: Andrés Monroy Gómez/IPS

BOGOTÁ, Dec 13 2013 (IPS) - The ousted left-wing mayor of the Colombian capital, Gustavo Petro, is a casualty of the battle over the introduction of a Zero Garbage programme, which had included thousands of informal recyclers in the waste disposal business.

“His removal was arbitrary,” said Nelson Rojas, one of the workers in the city government’s Basura Cero (Zero Garbage) programme.

“We don’t know what is going to happen now,” he told IPS in Plaza de Bolívar, where tens of thousands of people have demonstrated every day in front of city hall in support of the mayor since he was sacked on Monday Dec. 9.

Petro was fired and barred from holding public office for 15 years due to three “extremely serious infringements,” according to the inspector general, Alejandro Ordóñez, who has the authority to investigate and dismiss public officials.

Two of the infringements were logistical and the third was a “violation of the principle of free enterprise.”

The measure against Petro appeared to be final. But legal experts have said they found an article in the constitution establishing that the mayor of Bogotá can only be removed by the president, at the inspector general’s request.

According to the ultra-conservative Ordóñez, the mayor’s decision to put 63 percent of the lucrative waste disposal business in public hands violated the principle of free competition. At the time, the business was run by four private contractors.

The inspector general charged Petro with handing garbage collection over to public companies that supposedly lacked experience and that used garbage dumpsters instead of trucks for six months, which caused the death of one worker.

“There’s a lot of money in waste disposal,” said Rojas, wearing a green Basura Cero uniform. “The private companies are opposed because they got rich off the collection of garbage.

“The inspector general is an ally of the rich and they are against the mayor’s policies,” he said, as people rallied in Plaza de Bolívar, where Petro had urged people to come out to protest his removal.

“The private companies don’t give work to women or to older people,” he said.

Three women and a man wearing the same green coveralls agreed. “In Basura Cero, 60 percent of the workers are women. And it is mainly women who are employed to sweep the streets in Bogotá,” said another one of the protesters.

“More than 3,000 families will be left without a livelihood…we’re going to keep working in Basura Cero, we’re going to protest in shifts,” he added.

Jorge Estrada, 37, also wearing a green coverall, held up a sign with the reasons the mayor was fired: “For giving the recyclers decent working conditions”; “For taking the garbage business out of the hands of the Bogotá mafia”.

This city of eight million people is run as an autonomous capital district made up of 20 municipalities. Over the past year, garbage collection in 12 of them – 63 percent of the waste disposal in the city – has been in the hands of Aguas de Bogotá, a subsidiary of the state-run Empresa de Acueducto y Alcantarillado de Bogotá water and sewage company.

In the rest of the municipalities waste disposal is still carried out by three of the original four private consortiums.

Dec. 18, 2012 was the deadline for the city government to fulfil a constitutional court order for all organised garbage pickers to be included in the waste disposal business nationwide. The aim was to create equal conditions for those who make a living scavenging for and reselling recyclable materials.

Petro’s predecessors failed to fulfil a similar sentence in 2003, instead extending the contracts held by the private companies, which are the exclusive owners of the rubbish in their areas.

In practice, waste pickers, who go through the bags of unseparated trash that residents of Bogotá leave out on the sidewalk, made a tiny dent in the private companies’ monopoly.

The contractors are paid per ton of garbage trucked to the Doña Juana dump on the south side of Bogotá – a system that discourages recycling.

After taking office in January 2012 it took Petro six months to win city council approval for his development plan, which included a new rubbish collection system.

The idea was to move towards the goal of zero garbage by reducing the amount of waste dumped in landfills by separating garbage at source and recycling.

A city government census found that there were some 15,000 garbage pickers in Bogotá. The Zero Garbage programme hired 3,000 of them, and the rest are paid to transport recyclable waste to warehouses, instead of only paying the private contractors.

The new system extends the life of the city dump, and incorporates a vulnerable segment of the population in the business of trash collection.

But the private companies, who wanted to bid for new seven-year contracts, were not pleased when Petro tried to temporarily extend their contracts as he worked out the details of the new system.

In heated negotiations, Petro talked about putting the entire system into public hands. That is what inspector general Ordóñez cited when he argued that Petro was violating the principles of free enterprise and free competition.

When the city government saw no agreement was going to be reached, it prepared a district company to collect the garbage after the Dec. 18 deadline.

In just over two months it reconverted Aguas de Bogotá, which cleaned up sludge and garbage from sewers in dumpsters that were specially conditioned to transport leachates.

But the Petro administration suffered a severe backlash.

The contractors did not agree to return the garbage trucks to the city.

There weren’t enough dumpsters and the city government faced legal limits that kept it from acquiring trucks or adopting other measures before Dec. 18 because officially there was no emergency yet.

Three days before that date, the influx of garbage to the landfill dropped, according to measurements by the Special Administrative Unit of Public Services of Bogotá.

The night before, mountains of garbage had begun to appear on the streets, which the city government garbage collection service was unable to pick up because it would have violated the terms of the private companies’ contracts, which gave them exclusive control over the waste.

The city government was careful not to allow the contractors’ trucks into the landfill after Dec. 18, because it would have meant an automatic extension of the contracts.

The Petro administration used the dumpsters for leachate and rented used garbage trucks from the city of New York.

Although it took the trucks weeks to arrive, the system was working again within three to eight days after the Dec. 18 deadline, depending on the municipality.

In the negotiations, Petro finally agreed to allow three consortiums to continue operating in eight of the municipalities.

But in the view of the inspector general, it was not necessary to put garbage collection into public hands in order to live up to the constitutional court order.

The inclusion of thousands of garbage pickers in the system has involved carrying out a census, issuing special cards, and helping people open savings accounts – a process that has not yet been completed.

Justice Minister Alfonso Gómez Méndez announced that the government would propose a constitutional reform to modify the post of inspector general, who is named by Congress, has practically absolute power, and has 30,000 public employees under him.

Only if the constitutional article that would leave the case in the hands of the president, Juan Manuel Santos, prevails will Petro be able to return to the mayor’s office.