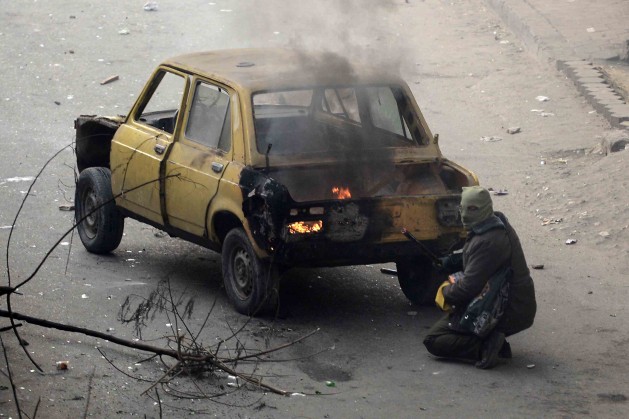 CAIRO, Jan 14 2014 (IPS) - As Egyptians head for a referendum Tuesday and Wednesday this week, the fate of the Muslim Brotherhood, which was swept into government in the last election, hangs in the balance.

The ruling military junta has been targeting the Muslim Brotherhood (MB) continuously since it seized power last year. Following a Dec. 23 suicide attack which targeted a police station in the city of Mansoura north of Cairo, in which 16 people were killed and dozens wounded, the Egyptian government formally designated the MB a terrorist organisation.

The government accused it of carrying out the suicide attack even though a Sinai-based militant group, Ansar Bayt al-Maqdis, claimed responsibility.

“We should consider this an interim constitution because it was drafted by a non-elected committee."

“The local media are trying now to accuse the Muslim Brotherhood of being behind the terrorist attacks taking place in Egypt recently in order to disrupt the referendum, but I reject this claim unless the authorities provide real evidence to condemn them,” said Bassam al-Zarqa, vice-president of the Salafi al-Nour Party, a strongly Islamist party.

“The map of Islamist groups has not changed,” al-Zarqa, former assistant to ousted President Mohamed Morsi (2012-2013), told IPS. “Those who believe that violence is the only way to change are still involved in terrorist attacks, while other groups believe in democracy and peaceful change. The MB is in the second group, and decided decades ago to renounce violence.”

But, he added, “there is no doubt that the recent terrorist attacks undermine the popularity of the MB and make them lose a large segment of sympathisers.”

Al-Zarqa believes that the electoral process is the only solution to save Egypt from sliding into a police state. He said the key indicator will be the people’s acceptance or refusal of the next president, regardless of his background and whether or not he belongs to the military.

“I have reservations about the ways of selecting the committee that drafted the Constitution, as they dropped the will of 18 million citizens who had voted in favour of the previous Constitution. The ball is now in the court of the Egyptian people to approve or reject this Constitution.”

Amr Moussa, chairman of the 50-member committee responsible for drafting the new constitution for Egypt, has said “this constitution widens the scope of freedoms in a very impressive way, reinforces the principles of gender equality, and grants women greater rights.” He expects the constitution to pass with a 70 percent “yes” vote.

Shortly before designation of the MB as a terrorist organisation, Moussa said, “Now I invite them to participate in the referendum and prove that they are part of this nation and that they want to get out of this chaotic situation.”

Moussa, who came fifth in Egypt’s first post-revolution presidential election in June 2012, said he would not contest the next election, and expressed his support for Egypt’s military chief, Abdel-Fattah El-Sisi, if he runs.

“The groups which reject the new constitution are extremists and refuse to recognise the June 30 revolution as a popular revolt, and consequently its influence on the political life,” Gabber Nassar, professor of constitutional law at Cairo University, told IPS.

Nassar, who was a member of the Committee of 50, told IPS “the endeavours of the MB and its allies to mobilise against the new constitution will fail, especially since the Egyptians link them with the terrorist attacks that threaten the security of the state.”

Nassar believes that the MB, which is formally boycotting the referendum, will “secretly enjoin their followers to participate and vote against the constitution, because they are used to work in the dark.” He added: “I expect that the final result of the referendum will be overwhelmingly yes.”

There is little to compare between the two constitutions – the one drafted in the days of Morsi and the one drafted by the Committee of 50, Nassar said. The first, he said, was devoted to the dominance of one faction in power, while the second is focusing on liberties and the rights of the marginalised and religious minorities and the underprivileged who were ignored by all previous constitutions.

“We should consider this an interim constitution because it was drafted by a non-elected committee,” Adel Ramadan, legal advisor at the Egyptian Initiative for Personal Rights (EIPR), told IPS.

Ramadan believes that the vote on Jan. 14 and 15 will not be only on the constitution, but on the road map and the legitimacy of the current system – and a rejection of the MB.