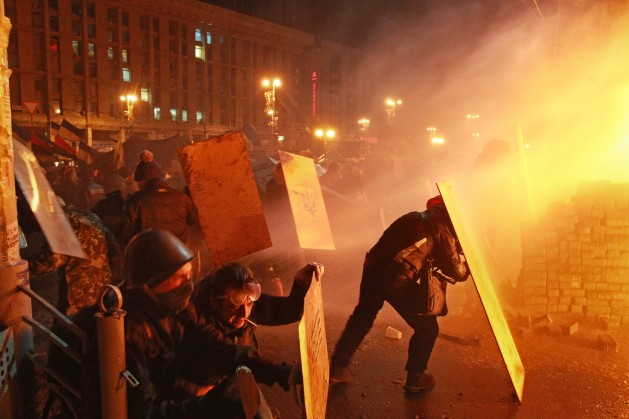 The police battling protesters in Kiev. Concerns continue about unrest even if the violence dies down. Credit: Natalia Kravchuk/IPS.

KIEV, Feb 21 2014 (IPS) - As Ukraine’s capital experiences the worst violence in its post-Soviet history, some protestors are warning that the festering discontent with the regime which led to the current crisis is unlikely to disappear overnight even if a solution to the current impasse is found.

When the anti-government protests began in November they were ostensibly a mass reaction to the decision by President Viktor Yanukovych to turn his back on the first stage of EU accession.

“People having had enough of Yanukovych, the corruption and the economic situation have all aroused the anger that has brought people onto the streets." -- Masha Kostishyn, an unemployed economist

But they soon became as much an expression of distaste and frustration with the ruling regime as any single political decision.

“This all started with the abrupt decision not to sign the agreement with the EU, but there was more to it than that. Everyone was completely fed up with Yanukovych’s regime,” Valerii Drotenko, a 45-year-old protestor told IPS.

Since coming to power in 2010, civil liberties have been eroded, political opponents have faced severe repression, and the independence and integrity of law enforcement agencies has all but disappeared, local and international rights groups say.

At the same time the perception of massive corruption, cronyism and nepotism within the regime has grown among the general population. Critics have pointed to Yanukovych concentrating political power in his own office and at the same time building his own family into a wealthy and socially dominant force.

On top of all this, Ukraine’s economy has struggled desperately since the financial crisis in 2008. Its currency is close to collapse, trade and budget deficits have ballooned and the country has been stuck in a recession for the last 18 months.

Masha Kostishyn, 34, an unemployed economist who lives in Kiev, told IPS: “People having had enough of Yanukovych, the corruption and the economic situation have all aroused the anger that has brought people onto the streets. But this would all be more civilised if the economic situation was better. As it is, at the moment it only helps to create chaos and anger.”

Ukraine’s dire economic situation and an accompanying inability to attract foreign investment has pushed it to be more and more reliant on trade with Russia, especially in the east of the country where much of Ukraine’s heavy industry is concentrated.

Already culturally close – one-sixth of the Ukrainian population is ethnic Russian – this has given the Kremlin an extra lever to strengthen its political influence on Kiev.

But, experts say, this has only pushed more of the population away from the government, especially in Western Ukraine which has traditionally been seen as more pro-European.

The sudden U-turn in late November when Yanukovych backed out of the deal and appeared to pledge the country’s future direction to its Eastern neighbour was the breaking point for many who feared Ukraine would become little more than a Kremlin puppet state embracing Russia’s model of state capitalism, and political and social repression.

Violence and killings over the past month, particularly the horrendous bloodshed of the past few days, has only deepened the general resentment towards the regime.

But while the opposition sticks to its calls for Yanukovych to go, even if they succeed in their demands eventually, many protestors say they hold little faith in the potential replacements.

The main opposition party, The Fatherland, is viewed by some as little more than another corrupt part of the political establishment.

Drotenko told IPS: “The authorities are criminal by their nature [but the] opposition is just another side of the same coin.

“They were pretty comfortable in their role as a ‘puppet’ or ‘decorative’ opposition, being paid by the same oligarchs as the ruling party and ignoring the voices of the people in the same way as Yanukovych has.”

He added: “Most of the people out protesting in Kiev are far from zealous backers of the opposition.”

Others have pointed to the radical far-right politics of the Svoboda party which is one of the major opposition movements involved in the protests.

Some protestors have blamed a lack of cohesion and inaction among opposition leaders in the past months for not bringing a swift end to the crisis in the early weeks of the protests.

“Yanukovych is certainly stupid and is to blame because of his criminal actions, but the opposition is also culpable for its not taking action quickly and decisively in the weeks after the protests began,” said Drotenko.

The horrific violence of the last few days has prompted a flurry of diplomatic action from the EU, the U.S. and Russia and early Friday a deal was agreed between the opposition, Yanukovych’s administration and Russian and EU diplomats to bring an end to the crisis. A key element of that deal is an early election.

But there is disappointment among some in Kiev that diplomatic efforts have come only now, and there is continuing unease over the underlying tensions.

Olga Kovalchuk, 37, a teacher in Kiev, told IPS: “Perhaps while this was a purely political conflict, before it escalated into violence, some form of action from the EU or Russia might have worked, but not any more. They missed their chance.”