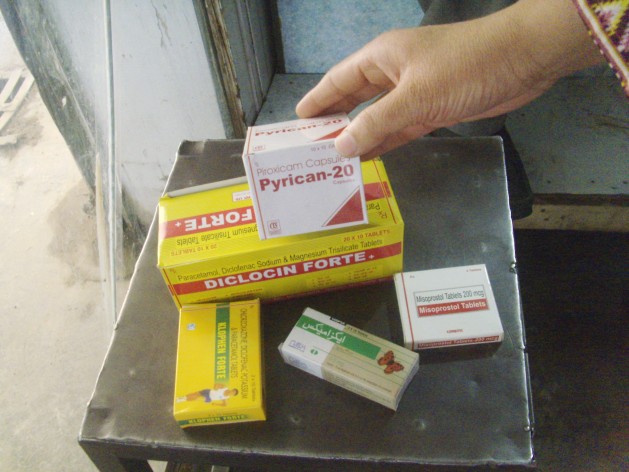 PESHAWAR, Pakistan, Feb 26 2014 (IPS) - They are contraband, yet a large number of Pakistanis have come to depend on drugs made in India and smuggled into Pakistan. Patients as well as doctors say these are cheap and effective, even as law enforcers look the other way.

The two countries do not have a trade agreement on drugs, but markets in Khyber Pakhtunkhwa province in the north of Pakistan do brisk business in India-made medicines that are sold over the counter.

“We are aware of huge stocks of medicine being smuggled into Pakistan from Afghanistan but we don’t take action because we know these benefit the local population." -- drug inspector Muhammad Riaz

“I have been prescribing India-made medicines to patients for a long time because of their effectiveness,” Dr Abdul Kabir, a medical practitioner based on the outskirts of Peshawar, tells IPS.

Doctors in rural areas prescribe them to people who cannot afford the pharmaceutical products of western multinational companies or do not find local brands effective.

Most of the 60,000 chemists in Khyber Pakhtunkhwa and the Federally Administered Tribal Areas (FATA) rake in a good income from the sale of Indian drugs.

“Pharmaceutical items smuggled in from India are available over the counter and officials concerned also know that these are effective,” Mushtaq Ali, a Peshawar-based chemist, tells IPS.

Ali says Indian medicines such as antibiotics, painkillers, anti-cancer injections, tranquillisers and anti-hypertensive drugs are easily available and have plenty of buyers. Among these are paracetamol, diclofenac, misoprostol, amoxicillin and ampicillin.

“Most chronically ill patients prefer Indian drugs because they require medication for longer periods. Local medicines are extremely expensive compared to Indian ones, so people opt for the latter.”

Patients in Khyber Pakhtunkhwa and FATA are the biggest beneficiaries of Indian drugs. That is because Afghanistan purchases drugs from India under a trade agreement and from there the medicines are smuggled to these two areas that border the neighbouring country.

“We are aware of huge stocks of medicine being smuggled into Pakistan from Afghanistan but we don’t take action because we know these benefit the local population,” drug inspector Muhammad Riaz tells IPS.

There are around 200 MNCs and 300 local pharmaceutical companies that sell drugs in Pakistan but their products are expensive, he says. The MNCs import raw material from their parent countries.

On the other hand, low-priced drugs marketed by local companies are often not effective, and are not always prescribed by doctors, Riaz says.

He says Pakistan’s Federal Quality Control Board has often tested Indian medicines and found them to be highly effective. “So stopping the sale of smuggled Indian drugs would amount to denying treatment to impoverished people.”

Jaffar Shah, a resident of Mardan district in Khyber Pakhtunkhwa says, “My father has been using medicines for high blood pressure for 10 years. Initially we used drugs marketed by MNCs, but then we ran out of money and resorted to an India drug which is far cheaper as well as effective.

“There are many people in our neighbourhood who use Indian drugs and are satisfied with their quality,” says Shah. “A neighbour of mine who suffers from cancer is taking Indian drugs as advised by his doctor because they are affordable.”

Indian medicines are also favoured for use for HIV/AIDS patients.

“Pakistan doesn’t have any trade agreement with India for medicines. The World Health Organisation has been importing anti-retroviral drugs from India for HIV/AIDS patients in Pakistan and these are provided at 13 centres across the country,” says Dr Atif Khan of the Hayatabad Medical Complex in Peshawar, capital of the Khyber Pakhtunkhwa province.

“These drugs are 20 times cheaper than those supplied by MNCs. They are being imported from India since 2005. These drugs are, however, only provided in hospitals under the supervision of qualified doctors,” he says.

The issue of smuggled Indian drugs has often come up in Pakistan’s National Assembly but the matter has been hushed up every time because lawmakers don’t want to invite public wrath by banning them, Khan says.

According to Rasool Shah, a senior teacher in the pharmacy department at the University of Peshawar, India had long allowed its manufacturers to get international patents for their products due to which its generic drug industry has flourished.

“Indian drug manufacturers try their best to get a slice of the 200 billion dollar market in Pakistan. MNCs based in the country are concerned because they are rapidly losing the market to Indian drugs.”