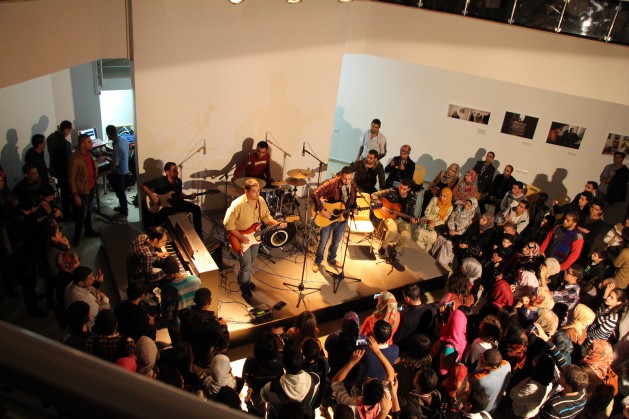 The Watar band at a performance in Gaza. Credit: Khaled Alashqar/IPS.

GAZA CITY , Mar 9 2014 (IPS) - Like almost everyone else in Gaza, these six are angry about the Israeli-imposed blockade and the resulting misery. Except that they are expressing their anger through music – without the music itself sounding angry.

There’s much to say – or sing if you prefer to say it that way. More than a million-and-a-half people in Gaza are living under a tight blockade. Poverty and widespread despair have radically increased as a result.

There’s much to say – or sing if you prefer to say it that way. More than a million-and-a-half people in Gaza are living under a tight blockade.

Unemployment is reaching high levels, particularly among graduate students. Dreams of a better and secure future lie shattered in the impoverished territory.

In these difficult circumstances, these six have chosen to sing through their Watar Band; Watar means ‘tune’ in Arabic. The musical six mostly use Western instruments, and sing in Arabic, English and French.

Following the Israeli assault on Gaza in 2009 which led to the deaths of more than 1,400 people and massive destruction, Ala Shoublak, founder and leading member of the band, gathered musician friends to set up the band.

“Everything was destroyed, including schools, roads and buildings, and the only theatre in Gaza that belongs to the Palestinian Red Crescent Society was bombed. We just decided to take our music instruments and sit on top of the destroyed theatre and sing for peace and freedom despite the ugly smell of death all around.”

After that brave start five years back, the band developed further and became more structured. They bought new instruments and began to do public shows.

The group has gradually become well known and attracts many fans, especially among school and university students in Gaza Strip. This is not surprising, because they sing about the hopes and aspirations of youth for a better life, and for a peaceful future free of conflict and siege.

The band has two clear objectives, Ala Shoublak tells IPS: “To resist first the occupation and the blockade through music which delivers messages of peace and freedom, and second, to communicate the hopes of the youth amidst suffering in Gaza to the outside world. That’s why we use English and French in our songs as well.”

The band has recently produced a song called ‘Dawsha’ (meaning ‘noise’ in Arabic) that has become very popular. Many youth come up to sing with the band through such songs.

Media student Mariam Abu-Amer joined the band during a project called ‘Gaza Sings for Freedom and Peace’. “It was a unique and special experience to singe with Watar,” she told IPS. “My participation gave me the opportunity to express my dreams and hopes to my people and to the world as a young woman in Gaza. It also allowed me to encourage female participation in music bands in Gaza as it’s generally limited.”

Despite success, the band lacks the funds and professional support it needs. It’s unable to produce an album because of funding problems.

All along, the group face the fundamental problem that in the political and economic crisis, music is not a priority. The Hamas-led government is focused on urgent humanitarian needs.

Director-General of the Ministry of Culture Mohammed Alaraieer told IPS that the government is trying to “deal with the cultural needs and situation in all forms and encourage artists and culturists to focus on the just cause of Palestine and Israeli occupation, but the ministry is not able to give much assistance because of the blockade and closure.”

Groups like Watar band therefore seek support from international organisations and institutions that are based in Gaza. The French Cultural Centre has allowed the band to use its premises for workshops and to host concerts. It also has also connected them with European bands, and organised a cultural tour to France and other countries in Europe.

The Edward Said National Institute of Music is the only place in Gaza that teaches music and provides professional training. Until recently it had only a small a number of students attending classes, but the numbers increased following Watar’s success in finding international audiences.

Director of the Institute Ibrahim Al-Najar told IPS that the Watar band’s “education and good command of international languages and excellent use of social media allow them to develop their skills and present their work globally. They put on wonderful performances and deserve to be supported.” But, he said, that success only “represents individual efforts.”

But the success is in part a result of the very difficulties Gazans face. “The youth are generally ambitious and hopeful, and success comes also out of suffering, and this is what motivated Watar band to form and attempt to reach international audiences, especially given that the political circumstances here have cut the world off from the people of Gaza,” Prof. Fadil Abu-Hein, who teaches psychology and sociology at Al-Aqsa University in Gaza told IPS.

Periodic instances of using the arts to express resistance and anguish have been arising in Gaza. Last year Mohammed Assaf from Gaza won the Arab Idol contest. Many who cannot fight the blockade fight it their own way through music and the arts.