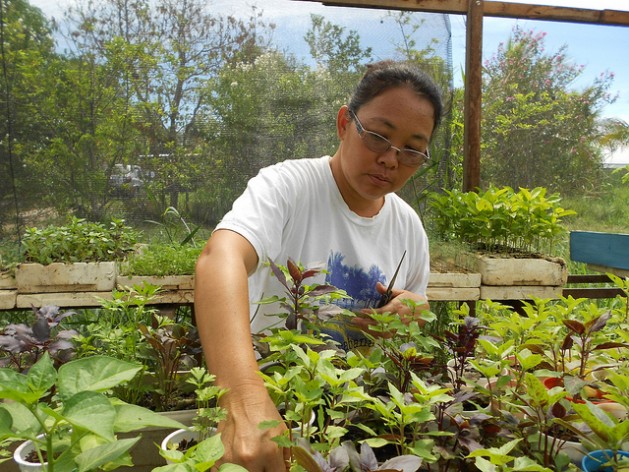 SEROPÉDICA, Brazil , Mar 29 2014 (IPS) - Brazilian farmer Isabel Michi’s day starts before dawn, when she goes out to the organic garden on her small five-hectare farm that she runs with help from her husband and occasionally their children.

Starting at 5 AM, the 42-year-old farmer of Japanese descent plows the soil, plants seeds and seedlings, fertilises, harvests, and carefully tends the plants in her greenhouse.

She acquired the farm in 2002 thanks to a swap in a settlement that emerged 10 years earlier as part of the government’s agrarian reform programme.

The settlement, Mutirão Eldorado, is in the rural municipality of Seropédica, an area with 80,000 inhabitants located 70 km from Rio de Janeiro, a city that is home to agricultural research institutions and organisations that provide support to small farmers.

On average, chemical fertilisers and pesticides absorb 70 percent of the income of small farmers in Brazil, according to experts.

Michi is a cofounder of the group Serorgânico, made up of 15 small farmers, which has become a local leader in supplies of chemical-free seeds and seedlings.

The farmer, who is a Nisei – the term used for second-generation Japanese immigrants – said she was deeply affected by the death of one of her brothers at the age of 37. He died of lung cancer, even though he had never smoked. Michi blames his death on the intensive use of agrochemicals on the farm of their parents, who came to Brazil in the 1960s.

“In my family we worked the land with many pesticides. We were young and the damages they caused were not well-known then,” Michi told IPS during a visit to her farm.

She was one of the youngest of eight siblings, from a family who settled in another part of the state of Rio de Janeiro. “We were very poor; we managed to harvest a truckload of food, but we didn’t have money,” she said.

“It was a really hard life,” said Michi, who has worked in the countryside since the age of 13.

Michi stopped using agrochemicals on her crops when she married Augusto Batista Xavier, 51, who she met in 1992, the first time she visited an organic farm in a neighbouring state.

“When we moved to this land, I was already thinking about agroecology, because for me, it’s the future,” she said.

The land in Seropédica is good for growing mandioc, okra, maize, pumpkin, sweet potato and banana.

Besides these vegetables and fruits, Michi is also growing 25,600 organic seedlings in her new greenhouse, to supply Serorgânico.

Her husband’s job managing a cattle farm ensures them a steady income. But he helps her with the heaviest tasks in his free time. Their three children, between the ages of 14 and 16, also lend a hand when school is out.

On average, Serorgânico produces three tonnes of food a month, most of which is sold in the circuit of organic farmers markets in wealthy neighbourhoods in the city of Rio de Janeiro.

For Michi, chemical-free farming is part of a holistic philosophy, which also takes into account the social and economic welfare of farmers and of consumers of fresh farm products.

But many organic farmers find it hard to survive in the face of competition from those who use more conventional farming methods at a much lower cost.

Although ecological products in Brazil cost between 30 and 50 percent more than food produced with agrochemicals, demand has grown approximately 30 percent in recent years.

José Antônio Azevedo Espíndola, a researcher with the Brazilian government’s agricultural research agency, EMBRAPA, pointed out to IPS that the number of organic farmers is still limited.

“There is potential for growth, but there is also a long road ahead,” he told IPS. “In the last few years, society’s concern about food quality has grown, from the point of view of the environment and of more sustainable, healthy production.”

Espíndola is a researcher in EMBRAPA’s agrobiological unit, which is dedicated to developing ecological farming techniques and methods.

Organic farmers represent a mere one percent of agricultural producers in Brazil. In 2006, when the last agricultural census was carried out, there were 5,000 certified ecological farmers, most of them small-scale family producers.

Espíndola estimates that there are now around 12,000 organic producers, who farm a combined total of 1.75 million hectares.

But threats loom on all sides.

Michi’s small farm is one illustration of the problems organic farmers face. It scrapes along, surrounded by quarries, cattle ranches, a sanitary landfill and a projected orbital motorway to be built just two km away.

In other words, the neighbourhood endangers her ecological production.

Trucks hauling rocks and gravel rumble up and down the dirt road in front of her farm, trailing clouds of dust, while the dump gives off a terrible stench and brings swarms of flies. Chemicals used at the dump are also in the air, causing skin ailments among her family.

Given these difficulties, Michi’s family constantly debates whether to move away.

“Besides the bad smell, there is the danger of water pollution,” Michi says. “There are days when I can’t stand working in the garden because of the odours and the flies. We’re an organic community directly affected by developments that arrived here after us.”

Family famers in Seropédica are worried about being hemmed in by industrial endeavours, while they put up with pressure from companies interested in setting up shop in the area.

“They made me an offer to buy my land, but I turned it down,” Michi said. “I’ll only leave here if I can buy the same thing elsewhere, where I can farm. I don’t know how to do anything else.”

Besides the challenges of using green-friendly farming methods, small-scale organic farmers have to overcome other obstacles, Michi said, like difficulties in access to credit and technical assistance from institutions dedicated to agricultural research and development.

The solution, according to Espíndola, is for the different parties involved to be brought together by a public policy specifically providing support for the organic farming sector.

“If that doesn’t happen, there will always be a bottleneck limiting production levels,” he said.

“The conditions still don’t exist in Brazil for a 100 percent organic chain of food production,” said Santos, who is earning a graduate degree in sustainable development in rural settlements that emerge from the government’s land reform programme.

Not only the ecological farming sector but family agriculture as a whole is suffering from a scarcity of resources, said Santos, who is behind the first project to set up greenhouses on family farms in the state, with support from EMBRAPA.

Michi’s farm was one of the first four to have a greenhouse installed.

Santos said it is possible to improve working conditions for organic farmers while at the same time getting the city “to look to the countryside once again.”