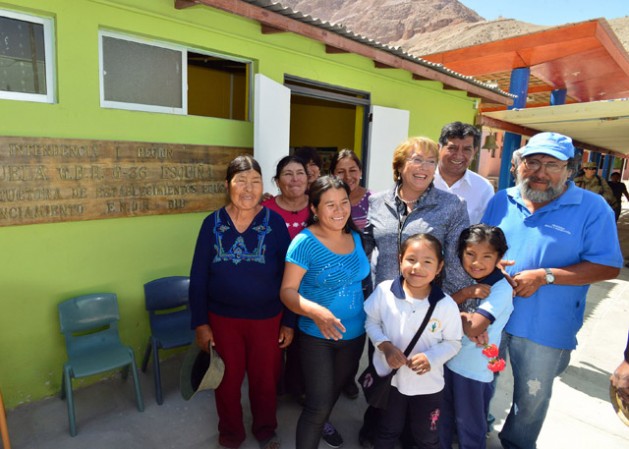 President Michelle Bachelet visiting a shelter on Apr. 3 in Camarones, one of the areas worst-hit by the quake, 2,000 km north of Santiago. Credit: Office of the Chilean President

SANTIAGO, Apr 5 2014 (IPS) - Chile appears to have learned a few lessons from the 2010 earthquake and tsunami, and it successfully drew on them the night of Apr. 1, when another quake struck, this time in the extreme north of the country.

Frightened by the intensification of seismic activity in the last few years, local residents fled for the hills, two km away from the Pacific ocean, after a tsunami alert was issued by the Chilean Navy’s Hydrographic and Oceanographic Service.

But despite the fear, nearly one million people participated efficiently in a mass evacuation, and the six people who were killed died of heart attacks or falling debris.

The 8.2-magnitude temblor occurred at GMT 23:46 and was the strongest in a series of quakes that have hit northern Chile since Jan. 1.

“We were in our apartment, which is on the third floor of a building. My daughter and my husband and I all held onto each other. Suddenly, the windows burst and glass started to fall on our backs. It was horrible,” a woman who lives in the northern city of Iquique, and had later evacuated to higher ground away from the coast, told Tierramérica.

“We have learned a lot, and many of the elements that didn’t work right in 2010 functioned perfectly now,” the director of the National Seismological Centre, Sergio Barrientos, told Tierramérica.

Four years ago, “the seismological monitoring system broke down and we were only able to provide information on the earthquake a couple of hours later,” he said.

“On this occasion, even though it was a much smaller earthquake, we managed to deliver the necessary information just a few minutes after it occurred,” he added.

President Michelle Bachelet flew over the most heavily affected areas, Iquique and Arica, 1,800 and 2,000 km north of Santiago, respectively, to view the destruction.

“There has been an exemplary evacuation process, with strong solidarity that has made this a process without major setbacks, which has protected people from a tsunami or other serious problems linked to the quake,” she said.

Tuesday’s earthquake was also a trial by fire.for Bachelet, who took office as president for the second time, on Mar. 11.

The president ended her first term just 12 days after the 8.8-magnitude quake and tsunami that devastated vast areas in central and southern Chile on Feb. 27, 2010.

That time the emergency preparedness protocols didn’t work, and a tardy tsunami alert was blamed for some 500 deaths, added to the destruction of over 200,000 housing units. Bachelet faced legal action, and several members of her first administration are still under investigation.

Four years later, the president decreed a timely state of emergency for the affected regions and called out the armed forces and the security forces to keep public order.

Significant investment in economic and human resources lies behind these changes. In 2012, the National Seismological Centre signed an agreement with the Interior Ministry to strengthen the network of sensors and set up new stations, while creating a robust communications system.

The ongoing investment of nearly seven million dollars has included the installation of 10 new monitoring stations, the purchase of satellite equipment, and training for the staff at the National Seismological Centre and the National Emergency Office.

The disaster preparedness and mitigation strategies are bearing fruit not only in Chile, but in the rest of Latin America as well, according to the regional office of the United Nations Educational, Scientific and Cultural Organisation (UNESCO).

Earthquakes, tsunamis, volcanic eruptions and hurricanes are common in different parts of the region, often associated with conditions of vulnerability, poverty and insecurity.

However, local populations are better prepared today, regional cooperation is effective, and warning and response systems are efficient, UNESCO reports.

“The situation has improved greatly since the 27 February 2010 tsunami that impacted Chile,” said UNESCO which, in alliance with the authorities, is involved in work on education for tsunami preparedness in Chile, Peru and Ecuador.

In Chile, the work has been carried out in 144 schools in areas at risk of flooding – lower than 30 metres above sea level.

“Citizen education is essential in these situations, especially in a country like Chile, where a tsunami can occur 15 or 20 minutes after an earthquake and it takes 10 minutes to analyse the information,” hydraulic engineer Rodrigo Cienfuegos of the National Research Centre for Integrated Natural Disaster Management (CIGIDEN) told Tierramérica.

“People have to react in an autonomous manner; they have to know where to evacuate to immediately after an earthquake of the characteristics of the one we had on Tuesday,” added Cienfuegos, an expert on tsunamis.

One of the biggest challenges now is for people to be prepared to deal with the impacts that follow the quake itself: living in evacuation centres, and putting up with the lack of food, water and electricity.

“The idea is that, once the emergency is over, people will be more ready to live through that complex period,” he said.

According to Cienfuegos, an academic at the Catholic University, this South American country, one of the world’s most earthquake-prone, with more than 4,000 km of coastline, should rethink human settlements in the future.

“We have to be aware of the threat that living so close to the coast means,” he said. “It’s hard to move people away who for years have been living close to the sea, but measures have to be taken when the construction of new human settlements is being studied.”

For now, the people of northern Chile should be ready, seismologists warn. It has been 137 years since the last major quake in the north of the country and the energy that has accumulated is greater than what was released on Tuesday.

*Originally published by Latin American newspapers that are part of the Tierramérica network.