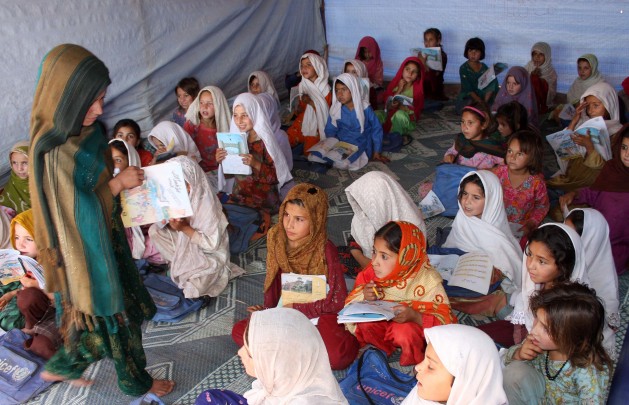 Girls at a makeshift school in Khyber Agency in the troubled northern region of Pakistan. Credit: Ashfaq Yusufzai/IPS.

PESHAWAR, Pakistan, Apr 7 2014 (IPS) - Following scattered defiance of the Taliban earlier, a new wave of students is now heading for education in schools and colleges across the troubled north of Pakistan.

“There is a steady increase in enrolment of students because parents have realised the significance of education, and now they want to thwart the Taliban’s efforts to deprive students of education,” Pervez Khan, education officer in the Federally Administered Tribal Areas (FATA), tells IPS.

"Anything opposed by the Taliban benefits the people.” -- Muhammad Darwaish, a shopkeeper in Khyber Agency

The boys literacy rate shot up correspondingly to 36.6 percent compared to 29.5 percent.

The Taliban are opposed to modern education. They have destroyed about 500 schools, including 300 schools for girls.

Khan says the Taliban’s campaign against education is only propelling more of the tribal population towards schools.

“The majority of people know that the Taliban are pursuing anti-people activities, such as damaging schools, and therefore they are now coming in droves,” he says.

Muhammad Darwaish, a shopkeeper in Khyber Agency, agrees with Khan. “I enrolled my two daughters and one son in school because I am now convinced that education will benefit them. Anything opposed by the Taliban benefits the people.”

Saeeda Bibi, one of his daughters, says she enjoys school. “I go to school everyday and am very happy there. Before, I used to pass the whole day in the streets.”

Darwaish says he will make every effort to keep his children in school. “I am poor but I will make all efforts to see my children educated.”

Khyber Agency, one of the seven tribal agencies within FATA, has faced some of the worst of Taliban violence. Since 2005, 85 schools have been blown up, depriving about 50,000 children of a school to go to on the militancy-stricken Pakistan-Afghanistan border.

But Khyber Agency saw a 16.1 percent rise in enrolment last year compared to 2012.

Like Darwaish, scores of parents in FATA are now taking the education of their sons and daughters more seriously.

Abdul Jameel of Kurram Agency sends both his sons to school. “Militants have blown up three schools in our area, due to which my children sat at home. They are back because now the Taliban-damaged schools have been reconstructed.”

Director of Education in FATA, Ikram Ahmed, says they have seen a 21.3 percent rise in boys and girls enrolment in Kurram Agency, 7.5 percent in South Waziristan, 4.3 percent in North Waziristan and 5.1 percent in Orakzai Agency.

“In the past few years, militant activities and the poor law and order situation in tribal areas badly hampered girls’ education but the government’s measures have paid off,” he says.

“The massive allocation of 3.67 billion rupees [37 million dollars] offset the impact of damage caused to educational institutions during the war against terrorism.”

Annually, education was given top priority in the development programme of 2013 – at 24.64 percent of the FATA budget of 18.5 billion rupees (188 million dollars).

Akram says that in some areas the army damaged schools because militants had been using them. “About 10 schools were destroyed by the army in South Waziristan where Taliban militants lived,” he says. All those schools are being rebuilt.

“In some areas, the government has established tent schools to provide education to children and at other places dozens of well-off people have offered private buildings and structures to be used as schools,” he says.

Bismillah Khan, one of the 20 lawmakers from FATA, tells IPS that the government will provide more scholarships and free textbooks to support poor students.

“We have suffered a great deal due to prolonged militancy,” says Iqbal Afridi, a leader of the Imran Khan-led Pakistan Tehreek Insaf. “Our students have suffered, businessmen and farmers have lost their work, and the only way to make progress is education. The good news is that people now want to educate their children at any cost.”