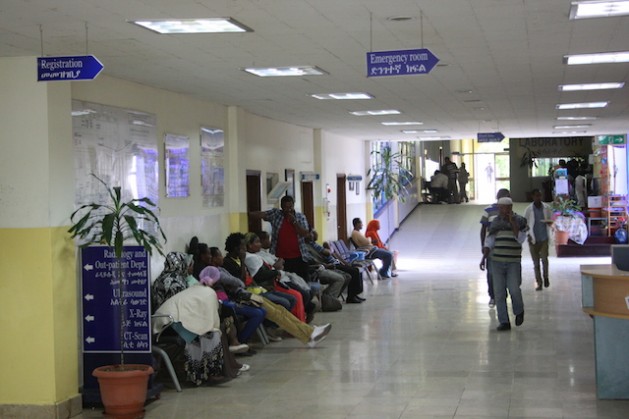 Ethiopians waiting inside a hospital in Addis Ababa on the weekend. The capital has only four stationary MRI scanners, providing services to 30 government- and private-run hospitals. Credit: James Jeffrey/IPS

ADDIS ABABA, Apr 3 2014 (IPS) - For a while now, Magnetic Resonance Imaging or MRI scanners have typically been a luxury that both government and private hospitals in Ethiopia have struggled to afford to purchase for in-house use.

Addis Ababa, the Ethiopian capital with an ever-growing population of around 3.8 million, currently has only four stationary MRI scanners that provide services to 30 government and private hospitals, according to Zelalem Molla, a surgeon based in Addis Ababa.

Outside of the capital, only two MRI scanners exist. But the six scanners — in this Horn of Africa nation of some 92 million people — are old fashioned and far behind the technological curve in the West.

“It would be wrong to claim that the mobile MRI scanner would save lives,” says Zelalem, whose lunchtime chat with American entrepreneur Peter Burns III about the paucity of scanners sparked a business idea.

“[In a developing economy] a government’s focus on financial market stability and security issues can result in healthcare issues remaining on the side-lines.” -- Alayar Kangarlu, MRI research centre, Columbia University

But, Zelalem notes, more MRI scanners — which use strong magnetic fields and radio waves to generate images of the inside of the body that can be analysed on computers — would crucially allow more doctors to diagnose illnesses far earlier when they are operable and potentially curable.

“Often it is not possible for doctors to diagnose illnesses such as tumours until they physically appear at a stage when the chances of saving a patient are slim — or it is too late,” Zelalem tells IPS.

However, actual figures about the number of people directly affected here by the lack of MRI scanners do not exist.

In the past, some Ethiopians have needed to travel to other African countries such as Kenya and South Africa, or to Europe to have scans. This even included Haile Gebrselassie, Ethiopia’s track runner, who used to go to Munich, Germany for scans to help diagnose running injuries.

Ethiopia technically has free healthcare for all, which is provided by government-run hospitals. The reality, however, is that “there are not enough hospitals and most suffer from inadequate staffing, budgets and machinery,” Zelalem says. Private hospitals exist but as an option affordable to very few Ethiopians.

And the cost of an MRI scan proffered privately is a frightening figure for most Ethiopians, many of whom earn between 500 to 1,000 birr (28 to 56 dollars) a month.

The scale of demand at government-run hospitals for free MRI scans means patients can be left with the choice of having to wait and risking their health, or raising funds to pay for a scan at a private hospital or institution.

Such gaps in Ethiopia’s healthcare are areas of concern to the government and many NGOs as three of the eight United Nations Millennium Development Goals (MDGs) for 2015 are healthcare focused, concentrating on reducing child mortality, improving maternal health as well as combatting HIV/AIDS, malaria and other diseases.

But people like Burns are taking advantage of these gaps to do good while making a profit at the same time.

“This project represents the highest form of achievement edified by the mantra: ‘Doing well by doing good,’” Burns, who is based in Addis Ababa as a self-styled “ExPatrepreneur”, tells IPS.

Burns describes the project to provide the country with scanners as a for-profit enterprise with a charitable component.

“We will be offering a total of 25 percent of our scans for free to those that are unable to afford it,” Burns says.

So far, Burns says he will only bring one mobile MRI scanner to Addis Ababa and will sell its services on a pay-per-scan basis. 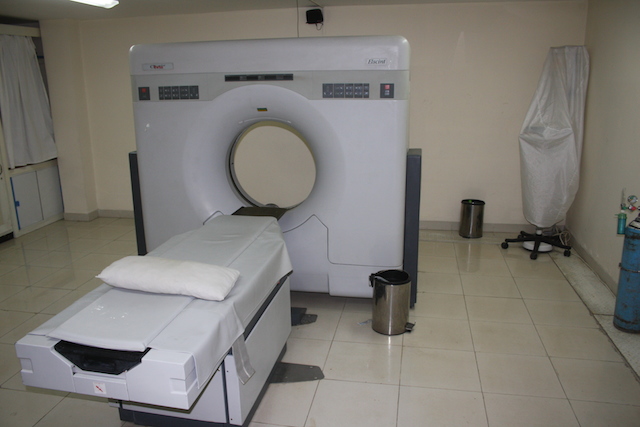 Also, there is a plan for a portion of profits to fund a not-for-profit venture called Doctors Within Borders, which aims to provide financial incentives to encourage Ethiopian doctors to remain within Ethiopia, as well as work in remote rural areas.

A previous private MRI scanner service in Addis Ababa set a precedent for profitability, Zelalem says. The business conducted about 30 scans a day — an MRI scan typically costs from about 115 to 150 dollars to conduct and process the images — totalling annual revenue of more than one million dollars. However, this scanner is fixed and patients are transported to it from various hospitals across the city.

“[In a developing economy] a government’s focus on financial market stability and security issues can result in healthcare issues remaining on the sidelines,” Alayar Kangarlu, who leads the physics and engineering group at the MRI research centre at Columbia University in New York, tells IPS. At the same time this creates an opening for private business, he notes.

And generating a healthy bottom line can have a beneficial role in healthcare provision, some say.

“NGO-based humanitarian healthcare usually struggles with sustainability and operates from grant to grant,” a worker within the health sector in Ethiopia, who wished to remain anonymous due to current work commitments, tells IPS.

Private enterprise, on the other hand, he notes, can achieve long-term sustainability thanks to profit generation. And it is usually more flexible, and more efficient due to greater accountability, than NGOs typically hampered by rigid fiscal rules on profit. Private enterprise can also free up capacity within public- or NGO-provided healthcare.

Admittedly profit generation within healthcare can turn sour and escalate wildly, he notes, as witnessed in the U.S., but Ethiopia’s healthcare system remains light years away from encountering such problems.

Burns remains confident that he can improve MRI scanner availability in Addis Ababa.

And if that is achieved, then the same business model could be applied to other major Ethiopia cities around the country — and go some way towards helping achieve the MDGs related to healthcare.

“Much can be accomplished through the small combined efforts of the many, and it is each of our responsibility to contribute,” Burns says. “This is one small step to serving just one of the many needs of a population in a place like Ethiopia.”