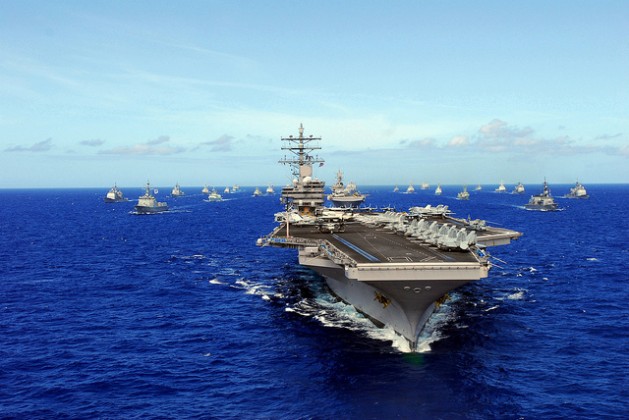 USS Ronald Reagan and other ships from RIMPAC 2010 transit the Pacific. The United States, a Pacific power whose military spending is not included in the Asia figures, has also played an important role in driving up the expenditures in the region. Credit: U.S. Navy photo

WASHINGTON, Apr 14 2014 (IPS) - For the second year in a row, the world is spending a little less on the military. Asia, however, has failed to get the memo. The region is spending more at a time when many others are spending less.

In 2012, for the first time Asia outpaced Europe in its military spending. That year, the world’s top five importers of armaments all came from Asia: India, China, Pakistan, South Korea, and (incredibly) the city-state of Singapore.

China is responsible for the lion’s share of the increases in East Asia, having increased its spending by 170 percent over the last decade. It has also announced a 12.2 percent increase for 2014.

But China is not the only driver of regional military spending. South Asia – specifically the confrontation between India and Pakistan – is responsible for a large chunk of the military spending in the region. Rival territorial claims over tiny islands  — and the vast resources that lie beneath and around them — in both Northeast and Southeast Asia are pushing the claimants to boost their maritime capabilities.

Even Japan, which has traditionally kept its military spending to under one percent of GDP, is getting into the act. Tokyo has promised of a 2.8 percent increase in 2014-15.

The United States, a Pacific power whose military spending is not included in the Asia figures, has also played an important role in driving up the expenditures in the region. The Barack Obama administration’s “Pacific pivot” is designed to reboot the U.S. security presence in this strategically critical part of the world.

As U.S. allies, South Korea and Japan were expected to shoulder more of the security burden in the region while the United States pursued national security objects in the Middle East and Central Asia.

China, meanwhile, pursued a “peaceful rise” that also involved an attempt to acquire a military strength comparable to its economic strength. At the same time, China more vigorously advanced its claims in the South China Sea even as other parties to the conflict put forward their counter claims.

The Pacific pivot has been billed as a way to halt the relative decline of U.S. influence in Asia. So far, however, this highly touted “rebalancing” has largely been a shifting around of U.S. forces in the region.

The fulcrum of the pivot is Okinawa, where the United States and Japan have been negotiating for nearly two decades to close an outdated Marine Air Force base in Okinawa and transfer those Marines to existing, expanding, and proposed facilities elsewhere.

Aside from this complex operation, a few Littoral Combat Ships have gone to Singapore. The Pentagon has proposed putting slightly more of its overall fleet in the Pacific (a 60-40 split compared to the current 50-50). And Washington has welcomed closer coordination with partners like the Philippines and Vietnam.

Instead of a significant upgrade to U.S. capabilities in the region, the pivot is largely a signal to Washington’s allies that the partnerships remain strong and a warning to Washington’s adversaries that, even if U.S. military spending is on a slight downward tilt, the Pentagon possesses more than enough firepower to deter their power projection.

This signaling function of the pivot dovetails with another facet of U.S. security policy: arms exports. The growth of the Pentagon over the last 10 years has been accompanied by a growth in U.S. military exports, which more than doubled during the period 2002 to 2012 from 8.3 to 18.8 billion dollars.

The modest reduction in Pentagon spending will not necessarily lead to a corresponding decline in exports. In fact, the opposite is likely to be true, as was the case during the last Pentagon slowdown in the 1990s. The Obama administration has pushed through a streamlining of the licensing process in order to facilitate an increase in military exports – in part to compensate U.S. arms manufacturers for a decline in orders from the Pentagon.

Asia and Oceania represent the primary target for U.S. military exports, absorbing nearly half of all shipments. Of that number, East Asia represents approximately one-quarter (South Asia accounts for nearly half).

The more advanced weaponry U.S. allies purchase, the more they are locked into future acquisitions. The United States emphasises “interoperability” among its allies. Not only are purchasers dependent on the United States for spare parts and upgrades, but they must consider the overall system of command and control (which is now C5I — Command, Control, Communications, Computers, Combat systems and Intelligence).

Although a French fighter jet or a Russian naval vessel might be a cheaper option in a competitive bid, the purchasing country must also consider how the item integrates with the rest of its hardware and software.

The United States has argued that its overwhelming military presence in the region and lack of interest in territorial gain have dampened conflict in Asia. But the security environment has changed dramatically since the United States first presented itself as a guarantor of regional stability.

Japan no longer abides by a strict interpretation of its “peace constitution.” North Korea has developed nuclear weapons. China has dramatically increased its capabilities. South Korea has created its own indigenous military manufacturing sector and greatly expanded its exports. Territorial disputes in the South China, Yellow, and East China Seas have sharpened. The only flashpoint that has become more peaceful in the last few years has been the Taiwan Strait.

The continued increase in military spending by countries in East Asia and the massive influx of arms into the region are both symptoms and drivers of conflict. Until and unless the region restrains its appetite for military upgrades, the risk of clashes and even all-out war will remain high.

In such an increasingly volatile environment, regional security agreements – on North Korea’s nuclear programme, the several territorial disputes, or new technological threats like cyberwarfare – will be even more difficult to achieve.

Most importantly, because of these budget priorities, the region will have fewer resources and less political will to address other pressing threats, such as climate change, which cannot be defeated with fighter jets or the latest generation of battle ship.