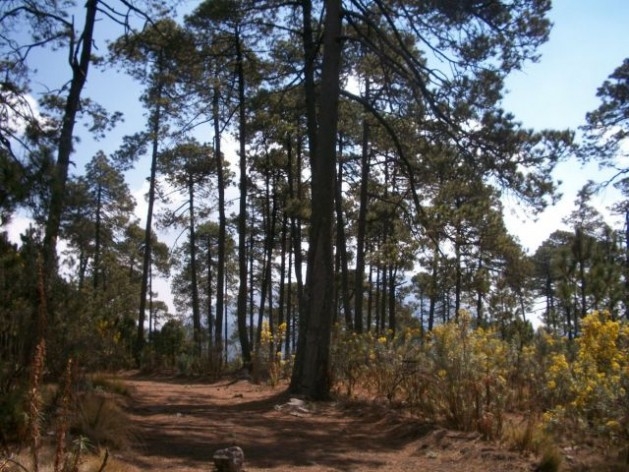 MEXICO CITY, May 8 2014 (IPS) - The rural communities of San Miguel and Santo Tomás Ajusco, to the south of Mexico City, are preserving 3,000 of their 7,619 hectares of forest in exchange for payment for environmental services. But the inequality in the communities is far from ecological.

The 484 men and 120 women who own plots of between half a hectare and eight hectares are organised in the Comisariado de Bienes Comunales (“commissioner’s office for communal goods”). To preserve the forest and care for the water, they receive trees, seeds, greenhouses and other supplies from the federal government and the authorities in the state capital.

There are numerous jobs, ranging from guarding the forest to prevent logging or fires to filling out official paperwork.

And the benefits provided are not insignificant.

Since 2012, this group of ‘comuneros’ – peasants farmers who work communal lands – has been participating in the programme for payments for environmental services financed by the National Forestry Commission (CONAFOR) and the private construction firm Ingenieros Civiles Asociados (ICA), who provide 123 dollars a year per hectare for keeping the forest clean, growing living barriers, and planting trees.

The work is not done on all plots at the same time, but in a rotating fashion, so the benefits circulate around a surface area of 220 hectares.

But women only participate in reforestation and garbage collection activities.

“We’re going to reforest up to July, when the rainy season starts,” Alma Reyes, a 42-year-old mother of three who is one of the 120 female ‘comuneras’, told IPS. “The problem is that the jobs available to women are very limited.”

Reyes overcame decades of exclusion in 2010, when she successfully ran for the position of secretary of the Comisariado, one of the organisation’s three highest-level posts.

But her term ended in August 2013, and Reyes doubts that another woman will be elected to the position.

“A sexist majority prevails, and the laws are not enforced,” she said. “Women have no influence over what is done, in the distribution of benefits or in decision-making.”

In 2013, similar payments were approved for 52,000 hectares of forest land around the country. And for a period of five years, CONAFOR earmarked 77 million dollars in environmental services on 471,000 hectares.

At first glance, the projects have borne fruit: most of the children in the communities attend school, people eat three meals a day, and villagers have stopped leaving. But statistics are needed to gauge the improvement in living conditions for both men and women.

The case of the ‘comuneras’ from Ajusco illustrates how the role of women is not taken into account in Mexico’s laws on climate change.

The General Climate Change Law in effect since 2012 makes virtually no reference to participation by women.

The only mention of the subject, in article 71, says the plans drawn up by the states must “always seek to achieve gender equity and the representation of the most vulnerable populations.”

“All laws can be perfected,” legislator Lourdes López, chair of the congressional commission on the environment and natural resources, told IPS. “We are reviewing it, because when the law is applied, details are found. We want to ensure follow-up on the climate change plans and on how the executive branch implements them.”

López, who belongs to the Green Ecological Party and heads the Mexican chapter of the Global Legislators Organisation (GLOBE International), is one of the advocates of greater reforms.

The law made the target of reducing national greenhouse gas emissions by 30 percent by 2020 obligatory, subject to the availability of funding and technology transfer, according to the most comprehensive study on climate legislation, which analysed the laws of 66 countries and was published in February by GLOBE International, a global network of parliamentarians concerned about the environment.

Martha Lucía Micher, a lawmaker from the left-wing Party of the Democratic Revolution (PRD), believes laws and decision-making must do a better job of including women.

“How can policies be developed if women are ignored?” asked Micher, chair of the gender equality commission. “How can sustainable projects be promoted if women don’t participate? We aren’t sufficiently represented in decision-making on climate change.”

The two legislative commissions presided over by López and Micher, as well as female activists and academics, set up a working group to propose changes to laws on climate change, with the aim of including a gender perspective.

This country of 118 million people is highly vulnerable to climate change and is already suffering the manifestations of global warming, such as more frequent and devastating storms, severe drought, a rising sea level, and a loss of biological diversity.

Over half – 51.3 percent – of the population lives in poverty, and many women, especially in rural areas, bear the brunt of the impact of climate change, because they are responsible for making sure their families have clean water and food, and for taking care of their families in case of disasters.

The absence of a gender focus in the country’s climate laws contrasts sharply with other areas.

The National Development Plan 2013-2018 stipulates that a gender angle must be incorporated in all government programmes, in order to achieve equality between men and women.

And the National Programme for Equal Opportunities and Non-Discrimination against Women 2013-2018 orders the incorporation “of a gender focus in the detection and mitigation of risks, emergency response and reconstruction in natural and manmade disasters,” and in “policies on the environment and sustainability.”

Leticia Gutiérrez, a policy adviser with the Alianza MéxicoREDD+ (REDD+Mexico Alliance), told IPS that “under the prevailing approach, women are still seen as a vulnerable group and the focus is on the promotion of productive projects without managing to have an impact on the structural causes of gender inequality.”

The Alianza sponsored a study that analyses Mexico’s main laws and policies, as well as public spending dedicated to equality between men and women in relation to the REDD+ (Reducing Emissions from Deforestation and Forest Degradation) mechanism.

The document, drawn up by the International Union for Conservation of Nature (IUCN) Global Gender Office, concluded that although there is a legal and institutional framework that requires the inclusion of gender considerations, a gender focus is not yet sufficiently included in a cross-cutting manner in forestry, agriculture, environment and climate policies.

Mexico is ranked 21 out of 72 countries on the IUCN Environment and Gender Index (EGI). The top country on the list is Iceland, and the Democratic Republic of Congo is in last place.

The achievements and proposals “sound great,” said Alma Reyes. “I hope they are put into practice, because gender equity is demanded from all sides.”