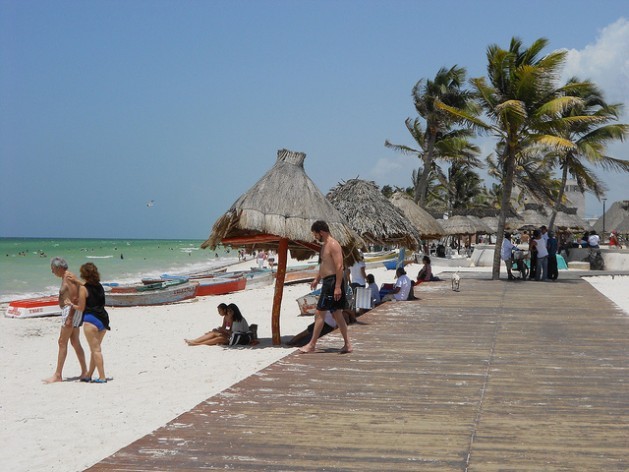 Progreso's economy is based on tourism, fishing and the port. Although it is highly vulnerable to climate change, it still has no local plan. Credit: Emilio Godoy/IPS

PROGRESO, Mexico , Jul 12 2013 (IPS) - Towns on Mexico’s Caribbean coast are behind schedule on the design and implementation of plans to face the challenges of climate change, in spite of the urgency of measures to reduce vulnerability.

IPS visited 37 coastal municipalities in the southeastern states of Tabasco, Campeche, Yucatán and Quintana Roo, and found that only six had specific programmes, 10 were in the process of creating them, and the rest said they were unaware of the requirement.

“The municipalities are waiting for the federal government to act, because they are completely overwhelmed,” said Lourdes Rodríguez, the founder of Marea Azul, an NGO working since 1992 to protect the ecosystem of Laguna de Términos, part of the country’s largest river basin, in Campeche. “They are doing very little; it’s all pretence,” she told IPS.

“The worst problems are on the coast, where there is erosion. There is a very serious demographic problem, because a lot of people are coming to work in the oil industry, and they are invading mangrove swamps to build houses and using just any materials as infill,” said the activist.

“The oil companies are settling in the mangrove swamps,” she said.

The Laguna de Términos, 705,016 hectares in area, was declared a flora and fauna protection area in 1994. It harbours at least 300 animal and plant species, including red, white and button mangroves, manatees, turtles and tapirs.

Ciudad del Carmen, a city of 221,000 people located 925 kilometres southeast of the Mexican capital, is an example of the uphill struggle climate change poses for municipalities. Start with the oil industry, add some tourism and deforestation, blend in liquid and solid wastes, and you have an environmentally unsustainable mix that fuels climate change.

Mexico’s Caribbean coast is exposed to increasingly destructive hurricanes and storms and to the threat of rising sea levels, which may flood extensive areas, according to experts. Biodiversity is also menaced by the tourist industry, deforestation, intensive cattle farming and oil industry activities.

The U.S. National Oceanic and Atmospheric Administration (NOAA) is forecasting between 13 and 20 tropical storms in the Atlantic hurricane region for the season that began in June, of which seven to 11 could become hurricanes.

“It is a major challenge,” said Itzel Alcérreca, the coordinator of the municipal climate action plan, PACMUN, which is charged with preparing municipal administrations to draw up policies on climate change. “But we are seeking to strengthen local capabilities and the local level is an excellent field of action, because there can be short-term results and spin-offs,” she told IPS.

PACMUN was launched in 2011 with pilot programmes in nine municipalities, and now covers 253. Thirty local governments have already drafted their climate plans, and another 30 are expected to complete theirs this year.

The plan is promoted by the International Council for Local Environmental Initiatives (ICLEI)-Local Governments for Sustainability, the National Institute of Ecology and Climate Change (INECC) and the British embassy in Mexico.

INECC reports that 1,300 out of the more than 2,500 municipalities in the country are particularly vulnerable to climate change, with 27 million people at risk, out of a total population of 117 million.

PACMUN has identified problems such as disproportionate population growth, inadequate planning, urbanisation, land use changes for housing or cattle ranching, and a lack of basic infrastructure, like sanitation.

The most sensitive sectors include tourism, health, agriculture, biodiversity, human settlements and energy, according to PACMUN.

In spite of this, the states of Quintana Roo, Yucatán and Campeche have barely started work on their climate change plans, although Tabasco’s is ready.

These four states emit more than 100 million tonnes of polluting carbon dioxide, out of the 748 million tonnes produced nationally, according to Mexico’s environment ministry.

“We are facing coastal erosion because of deforestation of the mangroves, and we are affected by stronger heat waves and heavier rainfall, but we don’t have the capacity to design a plan,” complained Javier Couoh, the head of Civil Protection which provides disaster relief in the town of Progreso, in Yucatán, 1,150 kilometres southeast of Mexico City.

“We need a programme, so we are seeking support to learn how to create one. It is a big problem,” added Couoh, who told IPS he had never heard of PACMUN.

The town, with a population of 54,000, celebrated the 142nd anniversary of its foundation as a trade port on Jul. 1. Its economy is based on tourism, fishing and the port itself, which potentially endangers its 1,251 hectares of mangrove swamps.

Progreso is similar to many towns along the coast that are still in the dark about climate change.

The national authorities view renewable energies, energy efficiency, non-motorised transport and ecotourism as feasible options to mitigate polluting emissions. But money is a limiting factor, so one goal of PACMUN is to raise funds for implementing the plans.

“We need to create a culture of local financing, with the municipalities raising resources. We must show that we can distribute resources efficiently,” said PACMUN’s Alcérreca. One source could be the climate fund for adaptation and mitigation initiatives, created by the General Law.

In places like Ciudad del Carmen, environmental depredation is a problem.

“It’s being dealt with very badly. It’s a recipe for disaster with no one to pick up the pieces. There is no coordination of actions and no one admits that we are behind. We don’t want to see what’s going on,” said Rodríguez of Marea Azul. In partnership with other environmentalists, the group has prevented state oil firm PEMEX from drilling wells in the Laguna de Términos.

“The national authorities should participate and society should be involved, because citizens are the final beneficiaries and the ones who have to learn. There must be awareness-raising among students,” said Couoh.