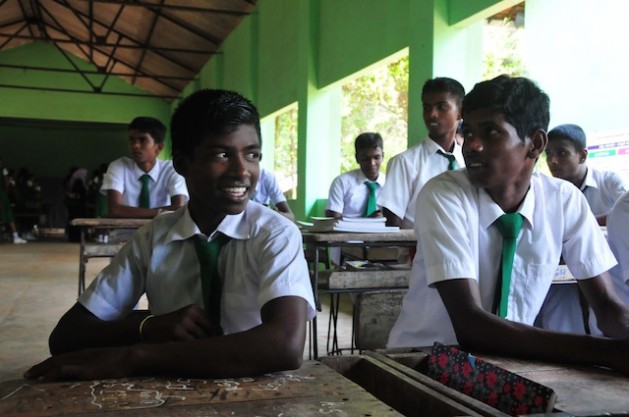 COLOMBO, May 21 2014 (IPS) - It has been five years since Sri Lanka’s brutal three-decades-long civil conflict came to an end in May 2009, but for the country’s youth, true national reconciliation is still a long way off.

They blame a lack of understanding, and the older generation’s unwillingness to compromise, for on-going divisions in this country where years of ethnic strife created a culture of discord that was not defeated on the battlefield.

Youth activists and government officials have voiced a unanimous appeal to Sri Lanka’s national leaders to listen to the roughly five million citizens between the ages of 15 and 25 who will determine the country’s future.

If these young people are marginalised, a lasting peace will be impossible, they say.

"No one from our parents’ generation is telling us how we can break down the divisions within our country." -- Pradeep Dharmalingam, a Tamil student living in Jaffna

Milinda Rajapaksha, working director at the National Youth Services Council, told IPS his organisation has been coordinating youth programmes across the country, which have made clear that young people from different ethnic backgrounds are willing to work together.

The Council is the largest government organisation of its kind working exclusively with young people. With chapters all over the island, it has already conducted some 20 nationwide programmes aimed at reconciliation.

“Understanding, collaboration and cooperation between young people is the only solution for fully achieved reconciliation,” Rajapaksha said.

Given that thousands of young people fought in the war – either as soldiers for the Sinhala-majority Sri Lankan government or as forced conscripts of the separatist Liberation Tigers of Tamil Eelam (LTTE) – it is crucial that youth build bridges across their embattled and bloody history.

Another factor to keep in mind, according to Ramzi Zain Deen, national director of the advocacy body Sri Lanka Unites, is that the country’s population pyramid is becoming top-heavy.

As of 2011, 10 percent of Sri Lanka’s population was over 60 years of age; the United Nations Population Fund (UNFPA) estimates that by 2025 the elderly will account for 20 percent of the population.

Although youth and adolescents comprise a higher portion of the population – roughly 26 percent – their lack of access to political power means they are reliant on the older generation to disseminate their views.

But far from feeling confident that they are in safe hands, many of the country’s young people say they are not even being listened to, much less represented as indispensible players in their nation’s future.

Leaving behind the baggage

Pradeep Dharmalingam is a young man hailing from the country’s northern province, which, until 2009, was under the control of the LTTE. Every week, the 20-year-old makes the 360-km journey from Jaffna to the capital Colombo.

But no matter where he is, he told IPS, he feels great reluctance on the part of the older generation to embrace change. Questions like the devolution of power to local provinces, for instance – particularly to the majority-Tamil northern and eastern regions – are highly loaded issues, with the older generation reluctant to let go of its staid ideas regarding the political future of the country.

“In Colombo I see one end of the spectrum, where people talk about development and money, and nothing else; in Jaffna the only thing I hear is talk about political change.

“There is no middle ground,” he complained, “no one from our parents’ generation telling us how we can break down the divisions within our country,” Dharmalingam, a member of the ethnic Tamil minority, added.

His friend and classmate in a Colombo-based computer programme, Anil Dassanayake, told IPS the older generation must stop “pointing accusing fingers and let go of the past.”

The 21-year-old Dassanayake acknowledged that young people couldn’t fully understand what it must have been like to live through a war that claimed an estimated 100,000 lives over three decades.

“It must have been terrible,” he said, “but we have to try our best to come together as a nation.”

One of the obstacles, says Deen, is that the older generation sees reconciliation and development as separate issues, whereas young people view them as parallel movements, working in tandem.

“It is important for everyone in this country to understand the concept of harmonious living,” he stressed. “That’s why we are working with the younger crowd [who] recognise that peace and harmony correlate highly with the development of this country.”

Deen’s fears find echo in the post-war development initiatives that have permeated Sri Lanka’s former war zones in the north and east.

Here, a young Tamil man named Benislos Thushan tells IPS, mega development projects have failed to improve the lives of the local population, possibly due to lingering racial discrimination against the Tamil minority.

“There are big highways [being built] and other projects in the works, but people in the province are still poor, still looking for jobs,” he said.

The government claims it has spent close to four billion dollars on large infrastructure development schemes in the northern province alone, but available data show that unemployment rates in the north are double the national average of four percent.

Officials in the province say that many graduates and other educated youth in the region remain unemployed, or seek jobs below their qualifications outside the province.

“There are no management jobs here,” Sivalingam Sathyaseelan, secretary to the provincial ministry of education, told IPS. “The only available employment falls in the category of day-labour. Most of the youth want something better than that.”