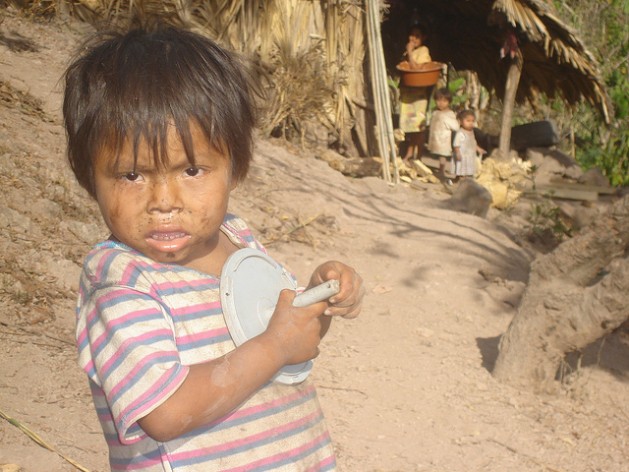 WASHINGTON, May 23 2014 (IPS) - The U.S. government has pledged to reduce the number of chronically malnourished children around the world by at least two million over the next half decade, receiving an initial positive response from the development community.

The U.S. Agency for International Development (USAID) launched the new programme Thursday at a major food security summit here. Government officials are also promising to maintain acute malnutrition rates at below 15 percent in areas afflicted by humanitarian crisis, such as the Central African Republic and South Sudan.

The federal programme, called the Multi-Sectoral Nutrition Strategy, will now set and monitor nutrition targets, including the 15 percent “emergency threshold”. It will also work with the private sector on issues related to maternal nutrition, dietary diversity, safe drinking water and teaching good hygiene.

The strategy builds on ongoing initiatives such as Feed the Future, the United States’ flagship anti-hunger programme. Earlier this week, USAID officials announced that Feed the Future had reached 12.5 million children over the past year alone.

At Thursday’s symposium, officials placed particular emphasis on integration of these various efforts alongside action on climate change.

“Instead of treating climate change and food insecurity as separate problems that need separate solutions, we need to, and we will continue to, come together to invest in ‘climate smart’ agriculture,” said Rajiv Shah, head of USAID.

The Chicago Council on Global Affairs, a think tank, also released its own report Thursday. That paper explores how climate change threatens food security and offers recommendations for the U.S. government.

“Climate change has reduced crop yields around the world, even here in the U.S.,” Doug Bereuter, co-chair of the report and president emeritus of the Asia Foundation think tank, told IPS.

“Quality of food is being negatively impacted in some parts of the world. The yields of some crops are not the same as a few years ago. In some cases you have to work harder, using greater irrigation costs to get the same yield you used to, despite the continued progress in seed adaptations.”

“The U.S. government should make global food security one of its highest development priorities,” he noted, “and we need to focus more attention and resources on agriculture resources, especially to the effect of adapting to climate change.”

The development community’s initial reactions to the U.S. government’s new nutrition plans have been positive.

“Feed the Future is a clear demonstration of the [Barack] Obama administration’s commitment to tackling hunger and malnutrition around the world,” Helene D. Gayle, president of CARE, a humanitarian group, said in a statement.

“When over 842 million people are hungry and undernourished, we need action from all stakeholders. The U.S. government’s commitment to engaging across sectors and supporting the efforts of smallholder farmers – particularly those of women farmers – is exemplary.”

The government of Honduras has also said it would be following the Feed the Future model.

“This model of development will be scaled up and used for our government in different new projects to reach our goals to sustainably reduce rural poverty.”

Of course, the climate components of these plans are far more politically complicated, particularly in the United States.

“In [the U.S.], climate change does turn people off if you mention global warming,” William Reilly, a senior advisor at TPG Capital, a private investment firm, said at Thursday’s event.

“But some of those same people are enthusiastic about energy independence, energy efficiency, solar power. These things are not interchangeable, but they get us to some of the same places.”

The Chicago Council highlighted the work of groups such as the Bill & Melinda Gates Foundation, which has been promoting the use of genetically modified crops (GMOs) bred to be more resistant to problems caused by climate change like pests, drought or floods.

For instance, the foundation’s work has led to a crop known as “scuba rice”, which can be submerged under water for up to 10 days and is said to quadruple yields, from one ton per hectare to four. These new varieties are currently used by five million farmers across Southeast Asia.

Of course, GMOs have also ignited raucous debate. Critics say genetically engineered crops have yet to be proven safe for human communities or environmental systems – and suggest that they do not even increase crop yield over the long term.

For proponents, however, such scientific interventions are the only feasible way of dealing with fast-increasing demands for food.

“It’s a major issue … but there’s no doubt in my mind that if we’re going to feed tje world’s expanding population we cannot ban GMOs from being produced in Africa, like the European Parliament has tried to,” Bereuter said. “One in every seven humans already has inadequate food resources, and we’re looking at the addition of two billion people by 2050.”

Others are warning that even solutions that try to sustain crop yields in the face of climate change often do not try to reduce the harm done to the environment caused by food production.

“There is a perceived conflict between climate mitigation and food security. That’s a false dichotomy,” Amy Dickie, the director of philanthropic services at California Environmental Associates and co-author of a recent report on how to mitigate the agricultural impacts of climate change, told IPS.

“There’s a lot of money going into improving agricultural development … but organisations haven’t, in a thoughtful way, used practices that will reduce climate emissions, because they’re worried they would harm yields.”

Dickie says agriculture is the largest cause of deforestation worldwide, particularly due to the clearing of land for grazing. A full 70 percent of greenhouse gas emissions from agriculture come from livestock.

As such, attempts to increase food production should not consider only resilience to changing weather patterns, Dickie says, but also the effect of various methods of food production on the environment.

“There’s something that can be done everywhere in the world, and it looks different in each part,” she says.

“In Africa, that’s increasing crop yields and the efficiency of fertilisers. The U.S. is very efficient but there’s lots of manure that isn’t being used. In Brazil, we need to make sure grazing land is as efficient as possible. And in Southeast Asia, we need better practices to reduce methane emissions from rice production.”