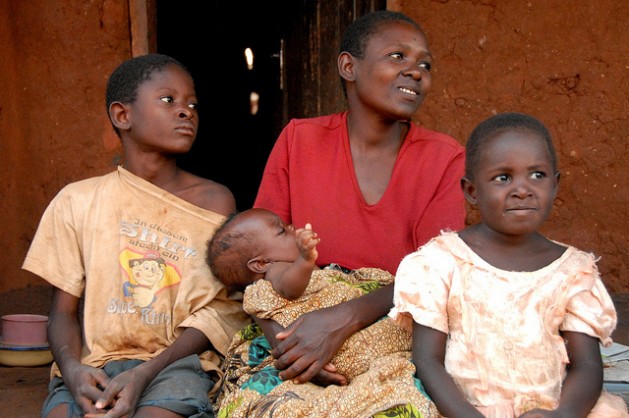 Manes Feston, flanked by her children, holds her four-month-old son Fedson. He was one of triplets but his siblings died because of a lack of welfare support. The family lives in a remote rural community in southern Malawi. Credit: Travis Lupick/IPS

Although over one billion people in 146 countries now participate in at least one of roughly 475 social safety net programmes, most of the extreme poor – those who live under 1.25 dollars a day – are not, says the report, The State of the Social Safety Nets 2014.

Nonetheless, the World Bank’s director for social protection and labour, Arup Banerji, remains hopeful on the growing reach of social safety net programmes, as well as their effectiveness.

“There is a strong and growing body of evidence that social safety nets are one of the most cost-effective ways for the countries to end extreme poverty and promote shared prosperity,” he said.

It is the first in a series of studies that will monitor and report on the growth and coverage of social safety nets in the developing world.

It finds that one-third of beneficiaries live in upper-middle-income countries, whereas in low-income countries where 47 percent of the population is extremely poor, less than 10 percent have a social safety net support.

The two primary reasons for this, according to the report, are a lack of scaled-up social safety net programmes in both low and middle-income countries, and the fact that social safety nets may not be specifically targeted at the income-poor, but instead focus more on improving nutrition or providing old age security.

Exponential growth in social safety nets has been achieved particularly with cash-based programmes.

This has been particularly true in Sub-Saharan Africa, where the number of unconditional cash transfers – transfers of cash targeted at a particular category of people, for instance, pensions – has tripled from 2010 to 2013, and the number of countries that implemented these programmes increased from 21 to 37 in the same period.

The largest programmes in the world are in India, China, and Brazil; together they have a combined reach of over 486 million people. This data, according to Banerji, shows that it is possible to extend the coverage of safety nets and reach the remaining populations who live in extreme poverty without any social protection.

“More could be done to assist the world’s poorest people,” he adds.

Lower-income countries face the most challenges in providing populations with safety nets.

In some 57 countries, social safety net coverage corresponds with the scale of poverty often measured by national poverty line. For example, in Guatemala, where 49 out of 54 percent of the population that lives below national poverty line benefits from social safety net programmes, the main policy challenge is to ensure that programmes include a sufficient amount of people.

However, there are about 50 countries where programme coverage is below the scale of the poverty challenge. One is Madagascar, where out of the 75 percent living below national poverty line, only one percent are covered. Another is Burundi, where of the 67 percent of the poorest people, only five perfect have some kind of social safety.

As countries get richer, the aggregate spending on social safety nets rises – but not significantly, says the report.

“Even lower income countries such as Egypt, Yemen and Morocco spend about 6.7, 4.7 and 0.7 percent of GDP on fuel subsidies and only 0.2, 1.4 and 0.9 percent of GDP on safety nets programmes respectively,” Ruslan Yemtsov, a lead economist at the World Bank, told IPS.

Energy subsidies do benefit the entire population, says the report, because they reduce prices of energy for heating, transport, and lighting. However, their impact is mainly on those income groups who are more likely to be consuming electricity and fuels in larger quantities, thus disregarding the immediate concerns of the extremely poor.

Further, the poorest people in the low-income countries are worse off when considering other capital flows, such as remittances – the money migrant workers send home – and external financing.

The study finds that remittances are ineffective in reaching the poorest households.

“Data from ASPIRE (Atlas of Social Protection: Indicators of Resilience and Equity) shows that in higher income countries, the majority of households receiving remittances are in the poorest quintiles,” Maddalena Honorati, an economist at the World Bank, told IPS.

On a more positive note, the report notes that many countries move from fragmented programmes to integrated social protection systems. More mechanisms that help policymakers monitor the effectiveness of the programmes have been developed.

One example of such a mechanism is the Cardastrosocial registry in Brazil, which is helping to collect data on 27 million people and then linking it to more than 10 social programmes.