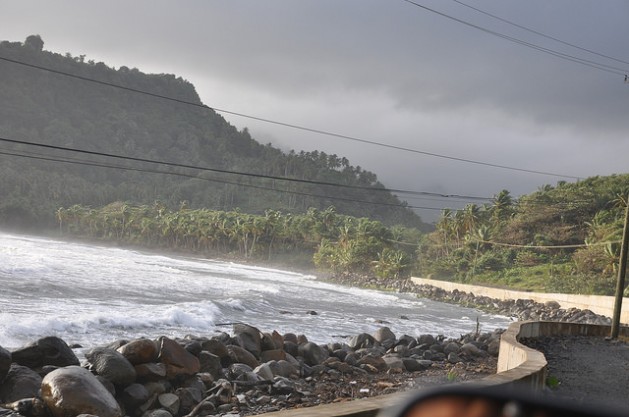 PHILIPSBURG, St. Maarten, Jul 2 2014 (IPS) - As the costs of climate change continue to mount, officials with the Commonwealth grouping say it is vital that Small Island Developing States (SIDS) stick together on issues such as per capita income classification.

Deputy Commonwealth Secretary General (Economic and Social Development) Deodat Maharaj told IPS the classification affects the ability of countries like Antigua and Barbuda, Grenada and others to access financing from the international financial institutions.

“To my mind, the international system has to take special consideration of countries such as Antigua and Barbuda, Grenada and others,” he said.

“The example I like to use is the example of Grenada. You would recall Hurricane Ivan about 10 years ago. It damaged about 70 percent of the housing stock in Grenada. It cost a billion U.S. dollars in damages, equivalent to two years GDP.

“So the countries in the Caribbean can move from high income or middle income to almost zero income with an economic shock or natural disaster,” Maharaj added.

Maharaj, whose appointment took effect earlier this year, said the Commonwealth is preparing “an analytical framework based on research, a case, so that countries such as Grenada when there is a natural disaster their international debt obligation for a particular period of time will be suspended so that they don’t have to continue to pay their debt when it is that they have suffered a natural disaster.”

On the issue of collaboration, one of only three female prime ministers in the Caribbean has reaffirmed her country’s commitment to dealing with climate change and all the issues associated with the global phenomena.

“I would like to reaffirm my strong belief in collaboration with other nations,” Sarah Wescot-Williams, the prime minister of St. Maarten, told IPS.

“Economic issues have forced us to look at ways and means of getting together and we are working collaboratively with other Caribbean nations to mitigate the effects of climate change as well as social issues of unemployment, crime and health.” 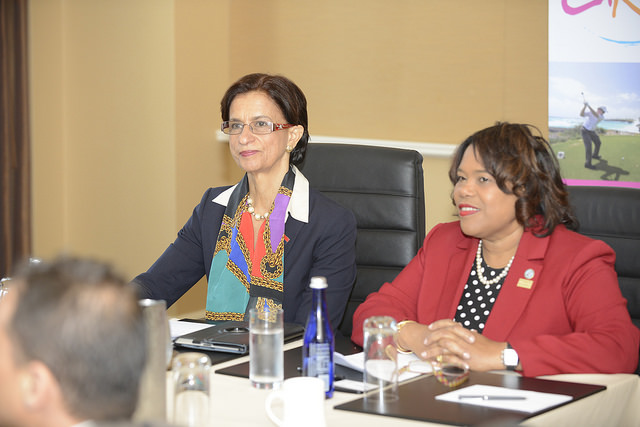 St. Maarten recently developed and approved its National Energy Policy “and as such we have very specific goals and objectives to reach by 2020 in terms of reduction and promoting alternative, new green ideas, new green products,” Wescot-Williams explained.

She reiterated a point made while addressing regional leaders recently. “I told them we should not only look out for the bigger impacts of climate change or look at those developments as something that is far from us, far from our homes, but look at small things like beach erosion, something that St. Maarten is seeing.

“A report has been issued not very long ago indicating that unless specific measures are taken, a great part of what is now land will no longer be as far as the smaller islands, including St. Maarten, are concerned.”

How they are ranked by financial institutions such as the International Monetary Fund (IMF) and World Bank is a major issue for Caribbean countries.

Camillo Gonsalves, a former ambassador to the United Nations, says it affects these countries’ ability to secure the required funding to effectively deal with climate change.

He noted that most Caribbean countries are ranked as middle-income countries, and using that metric alone makes his country, St. Vincent and the Grenadines, with its one-billion-dollar Gross Domestic Product (GDP), “richer than China”.

He noted that within three hours last Christmas Eve, a trough system left damage and loss in St. Vincent equal to 17 percent of GDP, while the country also suffered natural disasters in 2010, and 2011 – the loss and damage from each of which was in double digits.

This, however, is the measure by which the World Bank, the IMF determine the economic strength of Caribbean countries, Gonsalves said, adding that these international institutions do not consider the region’s vulnerabilities.

“The Caribbean small island developing states are among the most heavily indebted states in the world,” Gonsalves said, noting that the debt-to-GDP ratio in the region ranges from 20 percent in Haiti – which received significant debt forgiveness after the 2010 earthquake – to 139 percent in Jamaica, with St. Kitts and Nevis and Grenada at 105 and 115 per cent, respectively, even as the European Union has set itself a debt-to-GDP ratio of 65 per cent.

“If your debt-to-GDP ratio is 139 percent and you are struck by a natural disaster… how do you borrow yourself out of that crisis? Where do you find money immediately to build your roads, your houses, your bridges, your hospitals that have been damaged? How can you set money aside in preparation for the next climate event if you have a debt to GDP ratio of over 100 per cent or approaching 100 per cent, and your debt servicing charges are that high?” Gonsalves said.

Agreeing with Wescot-Williams and Maharaj that there is strength in unity, Gonsalves, who serves as foreign affairs minister for St. Vincent and the Grenadines, said the upcoming Third United Nations Conference on Small Island Developing States (SIDS) in Samoa is an ideal opportunity for regional countries to do more than just talk about collaboration.

The Samoa conference will be held from Sep. 1-4 under the theme “The Sustainable Development of Small Island States Through Genuine and Durable Partnerships”.

Maharaj said “one big challenge” for his organisation is the advancement of the interest of small states.

“I would like to think about and imagine what will the Caribbean be in the year 2050 at the time when our grand- and great-grandchildren will be around and many of us won’t be here,” Maharaj added.