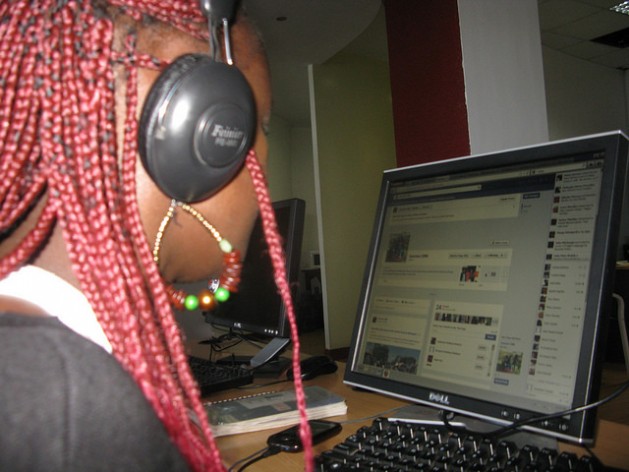 A teenage girl surfs the internet at a resource centre in Nairobi. Credit: David Njagi/IPS

WASHINGTON, Jul 16 2014 (IPS) - “My cousin was a very successful and distinguished student. She said that she finished high school with excellent grades and enrolled in college, but a month later, her parents forced her to leave school and burned all her books and studying material. So, the girl set fire to herself.”

As gruesome as this particular story’s outcome may be, such a narrative – in which a female student pursues education and subsequently faces generational resistance – is common in the anonymous storyteller’s home of Iraq.

The Middle East and North Africa lead the world in both their population of active Twitter users and number of registered YouTube accounts.

Yet thanks to the digital STOP-GBV (gender-based violence) campaign launched by AMAR U.S., an international peace-building non-profit, women who witness or experience human rights violations such as this one are now able to share their stories via social media platforms.

Christopher Kyriacou, the chief executive officer of AMAR U.S, says that social media has allowed his group’s women’s rights initiative to “blossom”, such as through the remarkable youth participation in AMAR’s Facebook pages.

“Many students undertake the responsibility of searching and investigating cases of gender-based violence and discrimination, and select the topics to be discussed during the lectures,” Kyriacou said, citing the testimony of a STOP-GBV project manager.

He adds that the Facebook pages allow students to “publish articles and pictures related to the issue [of Gender-Based Violence]…and participate in the dissemination of these subjects.”

AMAR’s digital dialogue represents just one instance of how technology’s presence has expanded in the world’s historically voiceless regions.

According to a 2013 Infographic collected by Squared Online, a UK-based digital marketing initiative, the number of social media users in the Middle East and North Africa is projected to increase 191 percent from 2011 to 2017. The study also notes how the Middle East and North Africa lead the world in both their population of active Twitter users and number of registered YouTube accounts.

It is this trend that has prompted many international development organisations to harness the rise of technology and social media in their respective education, public health and human rights initiatives.

Given that the theme of this year’s recently-celebrated World Population Day is to “’invest in the youth,” the international community has increasingly recognised the importance of using innovative digital techniques to engage the world’s enormous cohort of 15-to-35 year-olds – the largest ever- in their democracy-oriented agenda.

Babatunde Osotimehin, executive director of the U.N.’s Population Fund (UNFPA), said in a statement that if young citizens are “skilled and informed”, then they can “contribute more fully to their communities and nations.”

With this goal in mind, he is enthusiastic about the potential of technology to help provide young people with a voice, calling it “unethical” for such a large youth population to be neglected in the democratic process.

“We believe the possibilities with technology are enormous, and thus we see an urgent need to work with those in technology,” UNFPA’s Osotimehin told IPS. “We see people in international communities who have not yet been to school, but are carrying around smart phones … In 1999, Nigeria had only 400,000 landlines, whereas today there are more than 100 million cell phones.”

In order to unite this global tech explosion with its focus on youth, the UNFPA has launched a “selfie campaign”, in which young people from around the world can submit self-taken photographs of themselves to social media platforms using the tag #WPD2014.

The symbolic meaning behind this digital petition, which is scheduled to run through September, is to give young people a central role in crafting the United Nations’ post-2015 global development agenda.

“When you are isolated from global meetings like the U.N. General Assemblies to which your governments go to as member states … your selfies are saying you want to be in the picture of future development frameworks,” Laurent Zessler, a UNFPA representative, said as she premiered the campaign to youths in Fiji.

In addition to providing a medium for youths to share their stories and advocate for a role in future U.N. decision-making, technology has also facilitated the faster and more widespread transmission of practical information to youths.

A prime example of this strategy is the Text to Change (TTC) campaign, which is described as a social enterprise that “sends and receives information via mobile telephony in emerging countries.”

Josette de Vroeg, communications manager of the Netherlands-based campaign, said TTC was conceived on the premise that “every citizen in this world should have access to information, no matter if you’re rich or poor.

“We send participants the right personalised message at the right time, providing them with crucial information at the moment when they need it most,” de Vroeg told IPS. “The main objective is reducing infant and maternal mortality.”

Noting how TTC has been particularly effective in providing important health information to young pregnant women in Tanzania, de Vroeg concluded that, with the help of partners such as the US-based Centers for Disease Control and Prevention and the Tanzania Ministry of Health, more than 30 million free text messages have been sent out and 500,000 women have participated.

With the initiative’s presence now in 16 countries, de Vroeg added that TTC is currently running “the biggest interactive SMS campaign ever.”

“Over 80 percent of the African people now have access to a mobile phone. That’s why this is the most important medium for making a connection,” de Vroeg told IPS. “TTC connects organisations with their hard-to-reach target group, via mobile.”

Asked about how the campaign’s target populations have reacted to such an innovative technique, de Vroeg said that the feedback has been nothing but positive, with TTC’s beneficiaries saying that the text messages have helped them run businesses, learn about HIV, and improve their self-esteem.