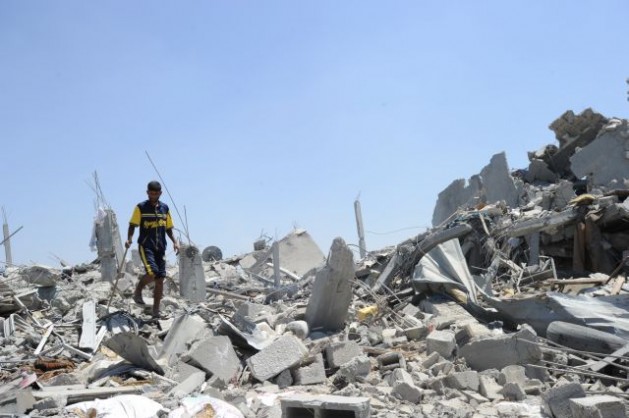 A Palestinian searches through the rubble of his home destroyed by Israeli strikes in Khuza'a, southern Gaza Strip on August 6, 2014. Credit: UN Photo/Shareef Sarhan

UNITED NATIONS, Aug 13 2014 (IPS) - As the dust – and the gunpowder – settles after the month-long devastating conflict in Gaza, there were apparently no victors or vanquished.

"Israel's military, economic, political and diplomatic pressures can stave off the Arab tsunami for some time, but not for long." -- analyst H.L.D. Mahindapala

Instead, it killed mostly civilians, while destroying homes, schools, hospitals, universities and U.N. shelters – acts of potential war crimes that may be investigated by the International Criminal Court (ICC) in The Hague.

U.N. Secretary-General Ban Ki-moon has described the death toll and destruction as “staggering.”

According to preliminary information, nearly 2,000 Palestinians have been killed – almost 75 per cent of them civilians, including 459 children, he added.

“There were more children killed in this Gaza conflict than in the previous two crises combined,” he told a U.N. news conference Tuesday.

In contrast, the Israeli death toll included 64 soldiers and three civilians, according to Israeli military figures.

“What has been the political value of this fight?” asked Vijay Prashad, George and Martha Kellner Chair of South Asian History and professor of International Studies at Trinity College in Connecticut.

He told IPS Israel finds itself isolated and most of the world is disgusted by the carnage, with sympathy for the Palestinian cause at an all-time high.

“The outcome on the political level is as yet unclear. It depends entirely on how the Palestinian leadership behaves,” said Prashad, a Middle East political analyst and author of ‘Arab Spring, Libyan Winter.’

H.L.D. Mahindapala, a former Sri Lankan newspaper editor and a political analyst based in Melbourne, told IPS Israel has lost its earlier monopoly of power to dictate terms in the region.

The Palestinian response through primitive tunnels has proved that they are a force to be reckoned with, he said. For instance, Israel boycotted talks in Egypt and Hamas forced them to come back by firing rockets and threatening its security, he pointed out.

“Israel was baffled and beaten by the network of tunnels,” said Mahindapala.

The ingenious network was built first as self-defence to beat the Israeli ban on goods. Later it became the best defensive/offensive mechanism which Israeli failed to dismantle despite its claim of ‘mission accomplished’, said Mahindapala, who has been closely monitoring the politics of the Middle East for decades.

Meir Sheerit, a former member of the Israeli parliament’s foreign affairs and defence committee, was quoted in the Wall Street Journal as saying the network of tunnels was an intelligence failure on the part of Israel.

“I don’t think our intelligence knew how many tunnels were dug, the location of the tunnels, or how many of them were planned for assault,” he said.

According to Ban, more than 300,000 people are still sheltering in schools run by the U.N. relief agency UNRWA, and in government and private schools and other public facilities, or with host families. At least 100,000 people have had their homes destroyed or severely damaged, he added.

And according to Israeli military sources, Hamas launched about 3,488 rocket and mortar attacks since the conflict began on Jul. 8 compared with 4,929 Israeli military strikes, primarily with U.S.-supplied weapons, against targets in Gaza.

In an op-ed piece in the New York Times last week, Ronen Bergman, a senior political and military analyst for the Israeli newspaper Yediot Aharonot, said, “If body-counts and destroyed weaponry are the main criteria for victory, Israel is the clear winner in the latest confrontation with Hamas.

“But counting bodies is not the most important criterion in deciding who should be declared the victor,” he said. Much more important “is comparing each side’s goals before the fighting and what they have achieved. Seen in this light, Hamas won.”

Hamas also waged an urban campaign against Israeli ground forces, inflicting at least five times as many casualties as in the last conflict, and successfully used tunnels to penetrate Israeli territory and sow fear and demoralisation, said Bergman, who is writing a history of the Israeli intelligence agency, Mossad.

The final verdict will depend largely on the outcome of any agreement reached after the peace talks in Egypt.

Prashad told IPS the Gaza war was “asymmetrical and disproportionate.”

This means that tactically there is no question that the main suffering and destruction is on the Palestinian people and on their enclave in Gaza, he pointed out.

The United Nations has made it clear that Gaza’s infrastructure is entirely destroyed, including hospitals, schools, businesses, power, food storage and supply.

“It is a humanitarian catastrophe. So on this level, Israel has won. It has made life unlivable for the Palestinians,” he said.

Israel says that its war aim was to destroy Hamas. It turns out, however, that it has destroyed Gaza once more, he added.

Prashad also said it would be an important gesture to make a full commitment to the ICC and to fully back an investigation to the nature of the war. It is to the benefit of the Palestinians that such an assessment is made, he added.

Mahindapala told IPS, “What the military strategists must realise is that it is not only Israel that is facing defeat but also its greatest ally, America.” If Israel fails, he predicted, the U.S. goes down with it.

“Israel’s military, economic, political and diplomatic pressures can stave off the Arab tsunami for some time, but not for long,” he added.

He said the U.S. and Israel are both in decline and how they propose to manage the new realities without a nuclear holocaust is the next big question.

Israel’s left-wing liberals are too minuscule and weak compared to the conservative hawks, and the main issue is not how Palestinians are going to live in occupied Israel but how Israel is going to live surrounded by a sea of Arabs, he added.

He pointed out the Arab world also must face the new realities. Islam too is facing its biggest challenge.

The crisis in the Islamic world is the crisis of adjusting to the 21st century. It is in transition and the Arab Spring was the first sign of breaking away from Arabic medievalism linked to oppressive authoritarianism. Both go hand in hand, he noted.

“The crisis is in the clash between traditional medievalism and modernism,” declared Mahindapala.