This is the first in a series of special articles to commemorate the 50th anniversary of IPS, which was set up in 1964, the same year as the Group of 77 (G77) and UNCTAD. 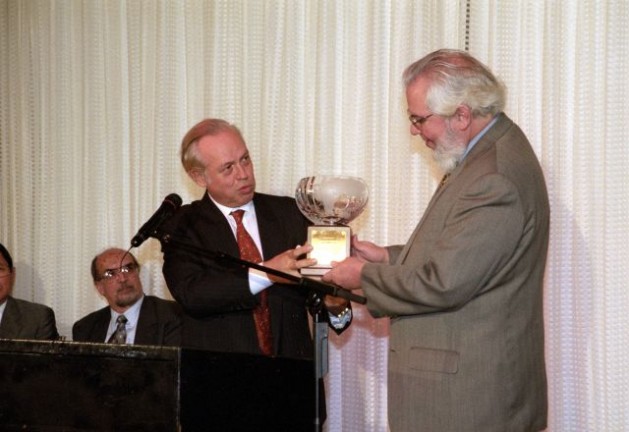 ROME, Aug 22 2014 (IPS) - In 1979, I had a debate at the United Nations with the late Stan Swinton, then the very powerful and brilliant director of Associated Press (AP). At one point, I furnished the following figures (which had been slow to change), as an example of Western bias in the media:

In 1964, four transnational news agencies – AP, United Press International (UPI), Agence France Presse (AFP) and Reuters – handled 92 percent of world information flow. The other agencies from industrialised countries, including the Soviet news agency TASS, handled a further 7 percent. That left the rest of the world with a mere 1 percent.

In a world where we need to create new alliances, the commitment of IPS is to continue its work for better information, at the service of peace and cooperation.

Why, I asked, was the entire world obliged to receive information from the likes of AP in which the United States was always the main actor? Swinton’s reply was brief and to the point: “Roberto, the U.S. media account for 99 percent of our revenues. Do you think they are more interested in our secretary of state, or in an African minister?”

This structural reality is what lay behind the creation of Inter Press Service (IPS) in 1964, the same year in which the Group of 77 (G77) coalition of developing countries saw the light. I found it unacceptable that information was not really democratic and that – for whatever reason, political or economic – it was leaving out two-thirds of humankind.

We set up an international, non-profit cooperative of journalists, in which – by statute – every working journalist had one share and in which those like me from the North could not account for more than 20 percent of the membership.

As importantly, we stipulated that nobody from the North could report from the South. We set ourselves the challenge of providing journalists from developing countries with the opportunity to refute Northern claims that professional quality was inferior in the South.

First, IPS was created to cover international affairs, unlike AP, UPI, AFP and Reuters, where international coverage was in addition to the main task of covering national events.

Second, IPS was dedicated to the long-term process and not just to events. By doing this, we would be giving a voice to those who were absent in the traditional flow of information – not only the countries  of the South, but also neglected actors such as women, indigenous peoples and the grassroots, as well as issues such as human rights, environment, multiculturalism,  international social justice and the search for global governance…

Of course, all this was not easily understood or accepted.

That created distrust on both sides of the fence. Many ministers of information in the South looked on us with suspicion because, while we were engaging in a useful and legitimate battle, we refused to accept any form of state control. In the North, the traditional and private media looked on us as a “spokesperson” for the Third World.

In 1973, the Press Agencies Pool of the Non-Aligned Movement agreed to use IPS, which was growing everywhere, as its international carrier. At the same time, in the United Nations, the call was ringing for the establishment of a New International Economic Order (NIEO) and was approved by the General Assembly with the full support of the Security Council.

It looked like global governance was on its way, based on the ideas of international economic justice, participation and development as the cornerstone values for the world economic order.

In 1981 all this came to an end. Ronald Reagan in the United States and Margaret Thatcher in the United Kingdom decided to destroy multilateralism and, with it, the very concept of social justice.

One of the first actions taken was to ask all countries working with IPS to cut any relation with us, and dismantle their national systems of information. Within a few years, the large majority of national news agencies, and radio and TV stations disappeared.  From now on, information was to be a market, not a policy.

The United States and the United Kingdom (along with Singapore) withdrew from the U.N. Scientific, Cultural and Educational Organisation (UNESCO) over moves to establish a New International Information Order (NIIO) as a corollary to NIEO, and the policy of establishing national systems of information disappeared. The world changed direction, and the United Nations has never recovered from that change.

IPS was not funded by countries, it was an independent organisation, and even if we lost all our clients from the world of national systems of information, we had many private media as clients. So we survived, but we decided to look for new alliances, with those who were continuing the quest for world governance based on participation and justice, with people interested in global issues, like human rights, the environment and so on.

It is worth noting that the United Nations was moving along a parallel path. In the 1990s, Boutros Boutros-Ghali, the sixth U.N. secretary-general, launched a series of world conferences on global issues, with the U.N. Conference on Environment and Development (UNCED) – also widely known as the ‘Earth Summit’ – the first in Rio de Janeiro in 1992.

For the first time, not only we of IPS – a non-governmental organisation (NGO) recognised by the U.N. Economic and Social Council (ECOSOC) – but any NGO interested in and concerned with environmental issues could attend.

To create a communication space for the two different gatherings, IPS conceived and produced a daily newspaper – TerraViva – to be distributed widely in order to create a sense of communality. We continued to do so at the other U.N.-organised global conferences in the 1990s (on Human Rights in Vienna in 1993, on Population in Cairo in 1994, on Women in Beijing in 1995, and the Social Summit in Copenhagen, also in 1995).

We then decided to maintain it as a daily publication, to be distributed throughout the United Nation system: this is the TerraViva that reaches you daily, and is the link between IPS and members of the U.N. family.

Against this backdrop, it is sad to note that the world suddenly took a turn for the worse with the end of the Cold War at the end of the 1980s, when an endless number of unresolved fault lines that had been frozen during the period of East-West hostility came to light.

This year, for example, the number of persons displaced by conflict has reached the same figures as at the end of the Second World War.

Social injustice, not only at national but also at the international level, is growing at an unprecedented speed. The 50 richest men (no women) in the world accrued their wealth in 2013 by the equivalent of the national budgets of Brazil and Canada.

According to Oxfam, at the present pace, by the year 2030 the United Kingdom will have the same level of social inequality as during the reign of Queen Victoria, a period in which an unknown philosopher by the name of Karl Marx was working in the library of the British Museum on his studies of the exploitation of children in the new industrial revolution.

Fifty years after the creation of IPS, I believe more than ever that the world is unsustainable without some kind of global governance. History has shown us that this cannot come from military superiority … and events are now becoming history fast.

During my life I have seen a country of 600 million people in 1956, trying to make iron from scraps in schools, factories and hospitals, turn into a country of 1.2 billion today and well on the road towards becoming the world’s most industrialised country.

In 1954, sub-Saharan Africa had 275 million inhabitants and now has around 800 million, soon to become one billion in the next decade, well more than the combined population of the United States and Europe.

To repeat what Reagan and Thatcher did in 1981 is therefore impossible – and, anyhow, the real problem for everybody is that there is no progress on any central issue, from the environment to nuclear disarmament.

Finance has taken a life of its own, different from that of economic production and beyond the reach of governments. The two engines of globalisation, finance and trade, are not part of U.N. discourse. Development means to ‘be more’, while globalisation has come to mean to ‘have more’ – two very different paradigms.

In just 50 years, the world of information has changed also beyond imagination. The internet has given voice to social media and the traditional media are in decline. We have gone, for the first time in history, from a world of information to a world of communication. International relations now go well beyond the inter-governmental relations, and the ‘net’ has created new demands for accountability and transparency, the bases for democracy.

And, unlike 50 years ago, there is a growing divide between citizens and public institutions. The issue of corruption, which 50 years ago was a hushed-up affair, is now one of the issues that begs for a renewal of politics. And all this, like it or not, is basically an issue of values.

IPS was created on a platform of values, to make information more democratic and participatory, and to give the voice to those who did not have one. Over the last 50 years, through their work and support, hundreds and hundreds of people have shared the hope of contributing to a better world. A wide-ranging tapestry of their commitment is offered in The Journalists Who Turned the World Upside Down, a book written by over 100 personalities and practising journalists.

It is evident that those values continue to be very current today, and that information continues to be an irreplaceable tool for creating awareness and democracy, even if it is becoming more and more a commodity, event-oriented and market-oriented.

But, in my view, there is no doubt that all the data show us clearly that we must find some global governance, based on participation, social justice and international law, or else we will enter a new period of dramatic confrontation and social unrest.

In a world where we need to create new alliances, the commitment of IPS is to continue its work for better information, at the service of peace and cooperation … and to support those who share the same dream.

Roberto Savio is founder of IPS and President Emeritus.