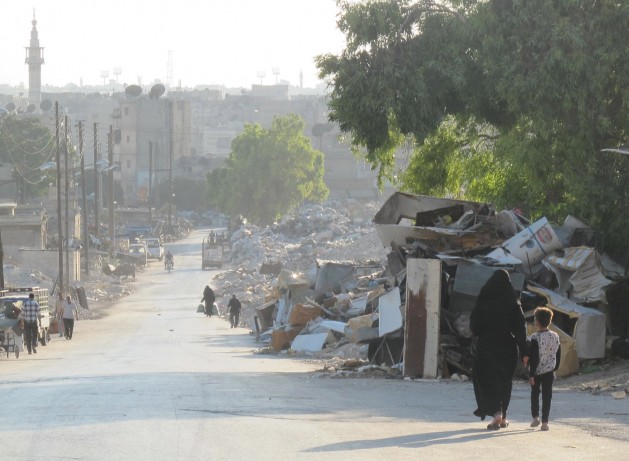 What remains of a street in Aleppo, August 2014. Credit: Shelly Kittleson/IPS

GAZIANTEP, Turkey, Sep 4 2014 (IPS) - The woman who walked into the Islamic Front (IF) media office near the Turkish border was on the verge of fainting under the hot Syrian sun, but all she cared about was her infant son.

With over half of the country’s population displaced, she was just one of the parents among the more than three million UN-registered Syrian refugees grappling with how to keep their children safe and healthy while dealing with the innumerable dangers inherent in war zones, refugee camps and statelessness.

When IPS met the young woman in early August, she was living in the nearby Bab Al-Salama camp in northern Syria after having been displaced from an area of heavy fighting.

The infant was only a few weeks old and needed to be breastfed, but there was nowhere out of the sight of men. And so, wearing a stifling niqab, she asked to use the room that now serves to ‘register’ foreign journalists crossing the border.

The room afforded some shade and privacy in which to breastfeed and, once the twenty-two-year-old former fighter in charge of the office had stepped out, she started feeding her child.

As she blew gently his sweaty forehead, the woman told IPS that she had kidney problems and could not sit – she could only lie down or stand up. She said that she was also having problems accessing medical care, for both herself and her feverish son. And even if the black abaya covering her body and the niqab over her face were hot, ‘’it’s better to use them,’’ she said, ‘’it’s war”.

The area around the Bab Al-Salama camp just across the border from the Turkish town of Kilis has been bombed several times, including a car bomb in May that killed dozens.

On the other side of the border, the camps that the Turkish government has set up for the over 800,000 Syrian refugees registered with the United Nations are said to be able to accommodate fewer than 300,000 of them.

In formal and informal refugee camps throughout the world, women are notoriously at risk of sexual crimes. Alongside economic issues, many parents on both sides of the border cite this as a reason to marry off their daughters earlier, in the attempt to ‘’protect their honour’’ and find someone to provide for them.

The children resulting from these unions are almost always unable to be registered and are thus stateless, joining the ranks of the many Syrian Kurds and others denied citizenship under Syrian president Bashar Al-Assad’s regime.

Mohamed was an officer in the Syrian regime’s army. From a fairly large tribe in Idlib, his family was targeted by the regime once the conflict began and he has fought with different Free Syrian Army brigades over the past few years.

Soon after a number of women were reportedly raped by ’shabiha’ in his area, he moved his young wife, mother and sisters across the border. He now crosses illegally into Turkey to see them when not fighting. 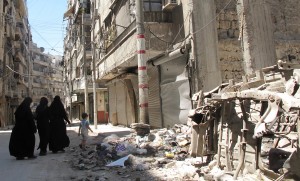 Mohamed is seeking ways to reach Europe. When IPS first met him in autumn of 2013, he had no intention of leaving. However, since then, his first son has been born, stateless.  The Syrian regime did not issue passports to officers in order to prevent them from defecting even prior to the 2011 uprising, and none of his family possesses one.

As a professional soldier without a salary and with no moderate rebel groups providing adequate wages to support a family, as well as no desire to join extremist groups – many of which would pay better – he feels does not know how else he can provide for his family.

On the Turkish side of the border, Ahmad – originally from Aleppo, Syria’s industrial capital – says he does not want to leave the region.

“I once asked my wife what country in the world she would go to if she could, and she answered ‘Syria’,’’ he told IPS proudly.

However, he added that he had stopped going backwards and forwards as a fixer and media activist as the day approached for his wife to give birth and the situation in Aleppo worsened.

When children approached a table as IPS was having tea with him in a Turkish border town, he somewhat gruffly told a little girl begging that she should ‘’work, even if that means selling packets of tissues on the streets.’’

‘’They have to learn to work and not just ask for money. Turks are starting to get angry that we are here,’’ he said.

Meanwhile, some attempts are being made to raise money for schools inside Syria that would be virtual ‘bunkers’, as Assad’s regime continues to target both schools and medical facilities.

In rebel-held Aleppo, IPS stayed with a Syrian family for a number of days in August as the regime barrel bombing campaign continued and as the danger of an impending siege by government forces or a takeover by the extremist Islamic State (IS) became more likely.

The eldest of the family’s four girls – only eight-years-old – had recently been hit by a sniper’s bullet while crossing the road to one of the few schools still functioning. Although it was healing, the exit wound will leave a very ugly scar on her arm.

Whenever the bombs fell during the night, the occupants of the room would move about restlessly, while the eight-year-old was always already awake, staring into the dark, utterly motionless.

Her father was adamant, however, that – come what may – the family would not leave.

In the late afternoon, little boys could be seen playing outside in the street with scant protection from snipers, only the nylon tarp of a former UNHCR tent hung across the street in an attempt to shield them. Large gaping holes marked the buildings, or what was left of them, in the street around them.