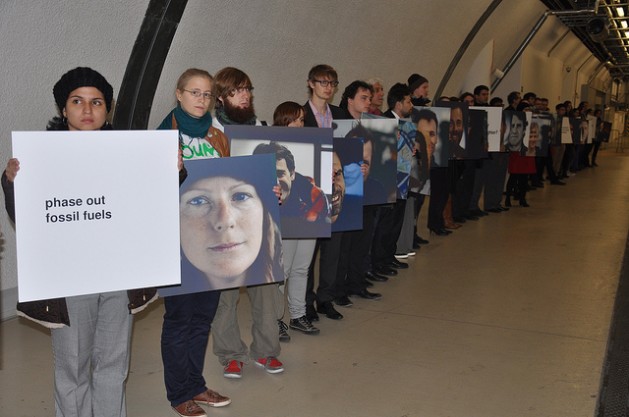 PENANG, Sep 17 2014 (IPS) - As the United Nations hosts a Climate Summit Sep. 23, the lingering question is whether the meeting of world leaders will wind up as another talk fest.

It is most likely that it could go that way. The problem is that developed countries are pressuring developing countries to indicate their pledges for emissions reductions post-2020 under the Paris deal which is currently under negotiation, without any indication of whether they will provide any finance or enable technology transfer – which are current commitments under the Convention.

What is worse is that many developed countries – especially the U.S. and its allies – are delaying making their contributions to the Green Climate Fund (GCF).

The GCF was launched in 2011 and it was agreed in Cancun, Mexico in 2010 that developed countries will mobilise 100 billion dollars per year by 2020.

The GCF has yet to receive any funds that can be disbursed to developing countries to undertake their climate actions.

Worse, there is a grave reluctance to indicate the size and scale of the resources that will be put into the GCF for its initial capitalisation. Only Germany so far has indicated that it is willing to contribute one billion dollars to the Fund. Others have been deafeningly silent.

The G77 and China, had in Bonn, Germany in June, called for at least 15 billion dollars to be put into the GCF as its initial capital. The Climate Summit must focus on this to get developed countries to announce their finance commitments to the Fund.

If it does not, the UNFCCC meeting in Lima will be in jeopardy, as this is an existing obligation of developed countries that must be met latest by November.

This is the most important issue in confidence building to enable developing countries to meet their adaptation and mitigation needs. Otherwise, without real concrete and finance commitments, the New York summit will be meaningless.

In Cancun, many developing countries already indicated what they were willing to do in terms of emissions reductions for the pre-2020 time frame and many of them had conditioned those actions on the promise of finance and technology transfer.

Despite this, the GCF remains empty and no technology transfer has really been delivered.

The other issue is whether developed countries will raise their targets for emissions reductions, as currently, their pledges are very low.
In 2012 in Doha, Qatar, developed countries that are in the Kyoto Protocol (such as the European Union, Norway, Australia, New Zealand. Switzerland and others but not including the U.S., Canada and Japan) agreed to re-visit the commitments they made for a second commitment period from 2013-2020.

The total emissions that they had agreed to was a reduction of only 17 percent by 2020 for developed countries, compared to 1990 levels. This was viewed by developing countries as very low, given that the Intergovernmental Panel on Climate Change (IPCC) had in their 4th Assessment Report referred to a range of 25-40 percent emissions reductions by 2020 compared to 1990 levels for developed countries.

It was agreed in Doha that the developed countries in the Kyoto Protocol (KP) would revisit their ambition by 2014. Hence, whether this will be realised in Lima remains to be seen. So whatever announcements are made in New York will not amount to much if the cuts do not amount to at least 40 percent reductions by 2020 on the part of developed countries.

Developed countries that are not in the Kyoto Protocol such as the United States, Canada and Japan were urged to do comparable efforts in emissions reductions as those in the KP.

It is not likely at all that these countries will raise their ambition level at all, given that both Japan and Canada announced that they will actually increase their emission levels from what they had announced previously in Cancun!

For the U.S., the emission reduction pledge that they put forth is very low, amounting to only a reduction of about three percent by 2020 compared to 1990 levels. For the world’s biggest historic emitter, this is doing too little, too late.

It is against this backdrop that the elements for a new agreement which is to take effect post-2020 is to be finalised in Lima, with a draft negotiating text to be ready early next year.

If the pre-2020 ambition is very low both in terms of the emission reductions of developed countries and the lack of resources in the GCF, the basis for the 2015 agreement will be seriously jeopardised.

Without any leadership shown by developed countries, developing countries will be reluctant to undertake more ambitious action. Hence, the race to the bottom in climate action is real.

If the Climate Summit does not address the failure of developed countries to meet their existing obligations which were agreed to under the UNFCCC, it will indeed turn into a mere talkshop that attempts to provide a smokescreen for inaction on their part.

Another lingering question: Can the private sector, which is expected to play a key role in the summit, be trusted on climate change?

It is the private sector in the first place that got us into this climate mess. Big corporations cannot be trusted to bring about the real changes that are needed as there will be much green-washing.

Companies are profit-seeking and they would only engage in activities that will bring them profits. There are huge lobbies in the climate arena who are pushing false approaches such as trading in carbon and other market mechanisms and instruments through which they seek to make more profits.

For example, there is a big push for ‘ Climate Smart Agriculture” with big corporations and the World Bank in the forefront.

There is no definition yet on what is ‘climate smart’ and there are grave concerns from civil society and farmers movements that such policies being pushed by big corporations who are in the frontline of controversial genetic engineering, industrial chemicals and carbon markets.

Many criticise the CSA approach which does not exclude any practices—which means that GMOs, pesticides, and fertilisers, so long as they contribute to soil carbon sequestration, would be permissible and even encouraged.

Such approaches not only contribute to environmental and social problems but they also also undermine one of the most important social benefits of agroecology: reducing farmers’ dependence on external inputs. Yet CSA is touted as a positive initiative at the New York Summit – a clear cut case of green-washing.

Real solutions in agriculture are those which are sustainable and based on agroecology in the hands of small farmers and communities- not in the hands of the big corporations who were responsible for much of the emissions in industrial agriculture.

The same can be said about the Sustainable Energy for All – with big corporations driving the agenda – where the interests of those who really are deprived of energy access will not be prioritised.

This is because the emphasis is on centralised modern energy systems that are expensive and not affordable to those who need them the most undermines the very objective it is set to serve in term of ensuring universal access to modern energy services.

If these initiatives are touted as ‘solutions’ to climate change, then we are in big trouble – for they are not the real kind of solutions needed.

A lot is being said about creating enabling environments in developing countries to attract private investments.

It is for developing countries to put in place their national climate plans and in that context, gauge which private sector can play a role, in what sector and how to do so, including the involvement of small and medium entrepreneurs, including farmers, fisherfolk, indigenous peoples etc.

But developed countries are pushing the interests of their big corporations in the name of attracting new types of green foreign investments. Such approaches are new conditionalities.

Any role of the private sector is only supplemental and cannot be a substitute for the provision of real financial resources and technology transfer to developing countries to undertake their action. This clearly cannot be classified as climate finance.

Developed country governments in passing on the responsibility for addressing climate change to the private sector are abdicating the commitments that they have under the climate change Convention. This is irresponsible and reprehensible.