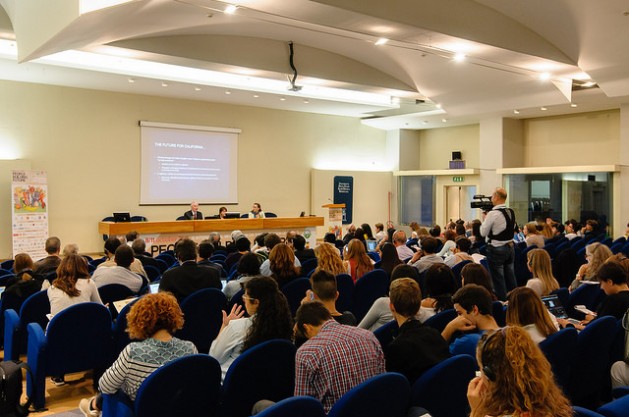 The 11th International Media Forum on the Protection of Nature has drawn journalists, academics and experts from some 50 countries to Naples, Italy Oc. 8-11 to discuss food, agriculture and the environment in the world. Credit: Emanuele Caposciutti/Greenaccord

NAPLES, Italy, Oct 9 2014 (IPS) - Small farmers can look to options like agroecological intensification and innovation, without necessarily turning to climate-smart agriculture, which is promoted by the United Nations but has awakened doubts among global experts meeting in this Italian city.

Alison Power, a professor at the Department of Ecology and Evolutionary Biology of Cornell University in New York state, said the concept is an umbrella that can encompass too many different factors.

“There are two approaches to grow production, intensification of conventional agriculture and agroecology. In the last 20 years food production has doubled, but problems like poverty aren’t solved only with that,” Power told IPS.

“There are two approaches to grow production, intensification of conventional agriculture and agroecology. In the last 20 years food production has doubled, but problems like poverty aren't solved only with that.” -- Alison Power

“So what is needed then is adaptation by small farmers with innovations based on agroecology,” said the expert, one of the participants in the 11th International Media Forum on the Protection of Nature organised Oct. 8-11 by the Italian NGO Greenaccord in the southwestern Italian city of Naples.

Family farmers produce nearly 80 percent of the world’s food. And although more food is being produced worldwide than at any other time in history, the United Nations estimates that over 800 million people are hungry.

The United Nations launched the Global Alliance for Climate-Smart Agriculture on Sept. 24 in New York, during the U.N. Climate Summit. The alliance brings together governments, non-governmental organisations and large corporations.

The issue forms part of the agenda of this week’s forum, whose theme is: “People Building the Future; Feeding the World: Food, Agriculture and Environment”. Other topics are the fight against hunger, the role of transnational corporations and adapting agriculture to climate change.

Some 200 reporters, academics, activists and students from 47 countries are taking part in the event organised by Greenaccord, an Italian network of experts dedicated to training in environmental questions. Climate-smart agriculture has been questioned by academics and civil society organisations who say it could foment the use of genetically modified seeds, which they see as a threat to sustainable production.

Stefano Padulosi, with the Nutrition and Marketing Programme of Bioversity International, said the changing climate and loss of natural wealth requires a cocktail of actions.

“It is necessary to strengthen the resilience of food and production systems and adaptation to climate change. It’s urgent to intervene in local farms and strengthen community seed banks,” the expert, who took part in this week’s global meeting, told IPS.

“It’s possible to build local capital, to confront and resolve problems from the communities and improve local stakeholder networks,” he added.

Bioversity International is a global research-for-development organisation that delivers scientific evidence, management practices and policy options to use and safeguard agricultural biodiversity to attain global food and nutrition security, based on the assumption that agricultural biodiversity can contribute to improved nutrition, resilience, productivity and climate change adaptation in developing nations.

Climate change, Padulosi said, can affect agriculture because of the reduction of the availability of water, rising global temperatures, the flooding of agricultural areas, or an increase in pests.

By the year 2050, demand for food will grow 65 percent, while the global population will reach nine billion.

Gary Gardner, a researcher with the Washington-based Worldwatch Institute, said the measures to be adopted must take peasant farmers into account, because a failure to do so would not make sense.

“Major efforts are needed for conservation of resources and becoming more efficient in their use. But huge gains in efficiency are available for producers, processors, business and consumers,” he told IPS.

Gardner is preparing a chapter on hidden threats to sustainability for Worldwatch Institute’s State of the World 2015 report.

The Food and Agriculture Organisation (FAO) reports that 11 percent of the world’s land is highly degraded and 25 percent is moderately degraded.

The U.N. agency estimates that global emissions from agriculture, forestry and other land uses have surpassed 10 billion tons of carbon dioxide.

At the same time, some two billion tons of CO2 per year were removed from the atmosphere as a result of carbon sequestration in forest sinks.
FAO projects that CO2 emissions could increase 30 percent by 2050.

Agriculture provides ecosystem services such as food, fiber, forage, bioenergy and natural habitats, while it benefits from them at the same time – another reason to promote sustainable practices.

“The services have the potential of growing production and sustainability. Practices like improving genetics of crops, integrated management of plagues and nutrients, development of precision agriculture and the management of soil and water can be optimised,” Power said.

For his part, Gardner calls for preserving the extension and quality of farmland and faster progress in promoting the conservation of farming techniques, as well as incentives to remove marginal land from cultivation.