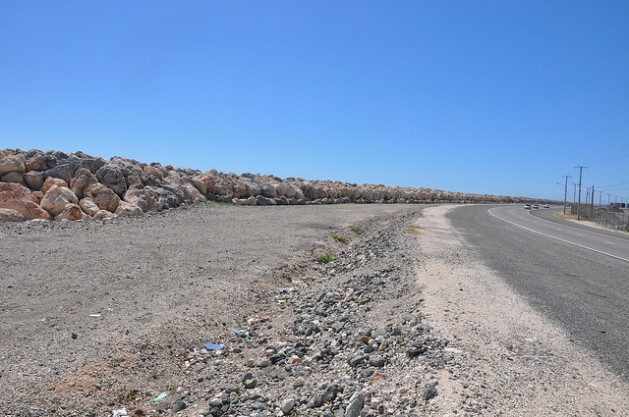 KINGSTON, Jamaica, Nov 10 2014 (IPS) - As the clock counts down to the last major climate change meeting of the year, before countries must agree on a definitive new treaty in 2015, a senior United Nations official says members of the Alliance of Small Island Developing States (AOSIS) “need to be innovative and think outside the box” if they hope to make progress on key issues.

Dr. Arun Kashyap, U.N. resident coordinator and UNDP resident representative for Jamaica, said AOSIS has a significant agenda to meet at the 20th Conference of the Parties (COP20) to the United Nations Framework Convention on Climate Change (UNFCC) in Lima, Peru, and “it would be its creativity that would facilitate success in arriving at a consensus on key issues.”

"We think that if we walk away it will send a strong signal. It is the first time that we have ever attempted such type of an action, but we strongly believe that the need for having a new agreement is of such significance that that is what we would be prepared to do.” -- Jamaica’s lead climate negotiator, Clifford Mahlung

Kashyap cited the special circumstances of Small Island Developing States (SIDS) and their compelling need for adaptation and arriving at a viable mechanism to address Loss and Damage while having enhanced access to finance, technology and capacity development.

“A common agreed upon position that is acceptable across the AOSIS would empower the climate change division (in all SIDS) and reinforce its mandate to integrate implementation of climate change activities in the national development priorities,” Kashyap told IPS.

At COP17, held in Durban, South Africa, governments reached a new agreement to limit the emissions of greenhouse gases. They decided that the agreement with legal form would be adopted at COP21 scheduled for Paris in 2015, and parties would have until 2020 to enact domestic legislation for their ratification and entry into force of the treaty.

Decisions taken at COP19 in Warsaw, Poland, mandated the 195 parties to start the process for the preparation and submission of “Nationally determined Contributions”. These mitigation commitments are “applicable to all” and will be supported both for preparing a report of the potential activities and their future implementation.

The report should be submitted to the Secretariat during the first quarter of 2015 so as to enable them to be included in the agreement.

AOSIS is an inter-governmental organisation of low-lying coastal and small island countries established in 1990. Its main purpose is to consolidate the voices of Small Island Developing States to address global warming.

In October, Ngedikes “Olai” Uludong, the lead negotiator for AOSIS, outlined priorities ahead of the Dec. 1-12 talks.

She said the 2015 agreement must be a legally binding protocol, applicable to all; ambition should be in line with delivering a long term global goal of limiting temperature increases to below 1.5 degrees and need to consider at this session ways to ensure this; mitigation efforts captured in the 2015 agreement must be clearly quantifiable so that we are able to aggregate the efforts of all parties.

Uludong also called for further elaboration of the elements to be included in the 2015 agreement; the identification of the information needed to allow parties to present their intended nationally determined contributions in a manner that facilitates clarity, transparency, and understanding relative to the global goal; and she said finance is a fundamental building block of the 2015 agreement and should complement other necessary means of implementation including transfer of technology and capacity building.

Sixteen Caribbean countries are members of AOSIS. They have been meeting individually to agree on country positions ahead of a meeting in St. Kitts Nov. 19-20 where a Caribbean Community (CARICOM) strategy for the world climate talks is expected to be finalised.

But Jamaica has already signaled its intention to walk out of the negotiations if rich countries are not prepared to agree on a deal which will reduce the impacts of climate change in the Caribbean.

“We have as a red line with respect to our position that if the commitments with respect to reducing greenhouse gases are not of a significant and meaningful amount, then we will not accept the agreement,” Jamaica’s lead climate negotiator, Clifford Mahlung, told IPS.

“We will not accept a bad agreement,” he said, explaining that a bad agreement is one that does not speak adequately to reducing greenhouse gas emissions or the provision of financing for poorer countries. It is not yet a CARICOM position, he said, but an option that Jamaica would support if the group was for it.

“We don’t have to be part of the consensus, but we can just walk away from the agreement. We think that if we walk away it will send a strong signal. It is the first time that we have ever attempted such type of an action, but we strongly believe that the need for having a new agreement is of such significance that that is what we would be prepared to do,” Mahlung added.

The Lima talks are seen as a bridge to the agreement in 2015.

SIDS are hoping to get developed countries to commit to keeping global temperature rise to 1.5 degrees Celsius above preindustrial levels, but are prepared to accept a 2.0 degrees Celsius rise at the maximum. This will mean that countries will have to agree to reduce greenhouse gas emissions.

Pickersgill said climate change will have devastating consequences on a global scale even if there are significant reductions in greenhouse gas emissions.

“It is clear to me that the scientific evidence that climate change is a clear and present danger is now even stronger. As such, the need for us to mitigate and adapt to its impacts is even greater, and that is why I often say, with climate change, we must change.”

But Pickersgill said there are several challenges for Small Island Developing States like Jamaica to adapt to climate change.

“These include our small size and mountainous terrain, which limits where we can locate critical infrastructure such as airports as well as population centres, and the fact that our main economic activities are conducted within our coastal zone, including tourism, which is a major employer, as well as one of our main earners of foreign exchange,” he said.

“The agriculture sector, and in particular, the vulnerability of our small farmers who are affected by droughts or other severe weather events such as tropical storms and hurricanes, and our dependency on imported fossil fuels to power our energy sources and drive transportation.”

Pickersgill told IPS on the sidelines of Jamaica’s national consultation, held here on Nov. 6, that his country’s delegation will, through their participation, work towards the achievement of a successful outcome for the talks.