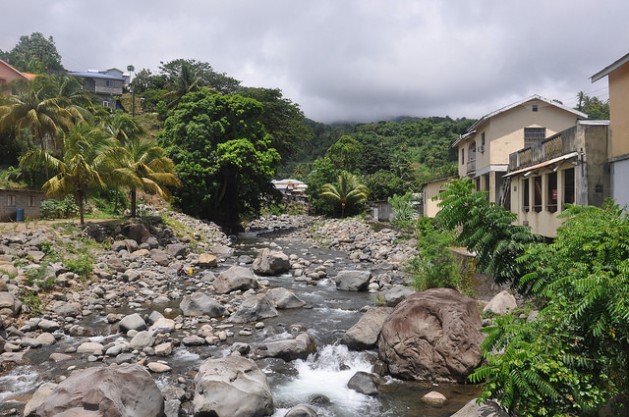 St. Vincent has been hit hard by flooding and landslides in recent years, blamed on climate change and deforestation. Credit: Desmond Brown/IPS

PASTURES, St. Vincent, Oct 29 2014 (IPS) - Glenda Williams has lived in the Pastures community in eastern St. Vincent all her life. She’s seen the area flooded by storms on multiple occasions.

But the last two times, it was more “severe and frightening” than anything she had witnessed before.

“The last time the river came down it reached on the ball ground [playing field] and you had people catching fish on the ball ground. So this time now (Dec. 24, 2013), it did more damage,” Williams, 48, told IPS.

Williams was giving a firsthand account of the landslides and flooding in April 2011 and the December 2013 floods which resulted from a slow-moving, low-level trough.

The latter of the two weather systems, which also affected Dominica and St. Lucia, dumped hundreds of millimetres of rain on the island, destroying farms and other infrastructure, and left 13 people dead. 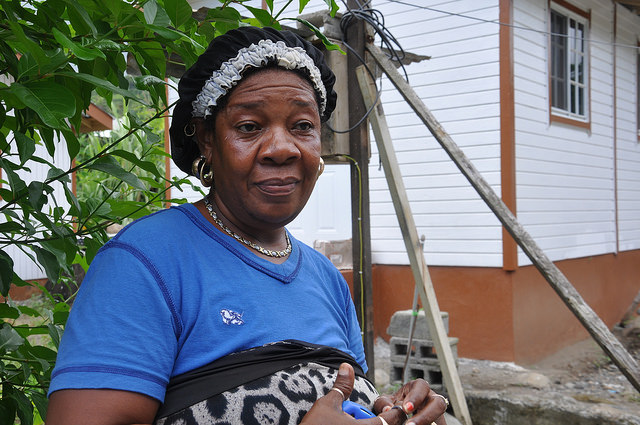 Prime Minister Ralph Gonsalves told IPS that in St. Vincent and the Grenadines, there is a major problem with degradation of the forests and this has contributed to the recent floods.

The debris left behind by the cutting of timber, Dr. Gonsalves argued, “helps to cause the blockages by the rivers and when the rivers overflow their banks, we have these kinds of flooding and disasters.

“The trees are cut down by two sets of people: one set who cut timber for sale and another set who cut timber to clear land to plant marijuana,” he explained. “And when they cut them they would not chop them up so logs remain, and when the rains come again and there are landslides they come down into the river.”

The country’s ambassador to CARICOM and the OECS, Ellsworth John, said the clearing of the forests is a serious issue which must be dealt with swiftly.

“It’s something that the government is looking at very closely… the clearing of vegetation in our rainforests maybe is not done in a timely fashion and it is something that has to be part of the planning as we look at the issue of climate change,” he told IPS.

“With warmer temperatures, warmer seas, there is more moisture in the atmosphere so when you get rainfall now it’s a deluge." -- Dr. Ulric Trotz

Gonsalves admitted that policing of the forests is a difficult task but added, “If we don’t deal with the forest, we are going to have a lot of problems.”

St. Vincent was the venue for a recent climate change conference. Gonsalves said the island forms the perfect backdrop for the two-day conference having experienced first-hand the impacts of climate change.

The seminar was held as part of the OECS/USAID RRACC Project – a five-year developmental project launched in 2011 to assist the Organisation of Eastern Caribbean States (OECS) governments with building resilience through the implementation of climate change adaptation measures.

Speaking with IPS on the sidelines of the conference, Deputy Director and Science Advisor at the Caribbean Community Climate Change Centre (CCCCC) Dr. Ulric Trotz said with the advent of climate change, St. Vincent and the Grenadines could expect similar extreme weather events in the future.

“What happened there is that you had an unusual extreme event, and we are saying with climate change that is to be expected,” Trotz told IPS.

“With warmer temperatures, warmer seas, there is more moisture in the atmosphere so when you get rainfall now it’s a deluge. It’s heavy and you’re getting more rainfall in a short time than you ever experienced.

“Your drainage systems aren’t designed to deal with that flow of water. Your homes, for instance, on slopes that under normal conditions would be stable but with heavy rainfall these slopes now become unstable, you get landslides with loss of property and life, raging rivers with the heavy flow of water removing homes that are in vulnerable situations,” he added.

Gonsalves said that between 2011 and 2014, St. Vincent and the Grenadines has spent more than 600 million dollars to rebuild from the storms.

In September, the European Union said it would allocate approximately 45.5 million dollars in grants for St. Vincent and the Grenadines and St. Lucia after both countries were affected by the devastating weather system in December 2013.

St. Vincent and the Grenadines, which suffered the heaviest damage, is earmarked to receive EC 23.5 million and St. Lucia EC 22.4 million.

This long-term reconstruction support will be in addition to the EC 1.4 million of emergency humanitarian assistance provided by the European Union to the affected populations in the two countries immediately after the storm.

The funds will be dedicated to the reconstruction of key infrastructure damaged by the floods and to build resilience by improving river protection and slope stabilisation in major areas of the countries.

The Chateaubelair Jetty in St. Vincent and the Grenadines and the Piaye Bridge in St. Lucia which were extensively damaged during the storm are infrastructure that could potentially benefit from the EU intervention.

“This support demonstrates the EU’s commitment to the reconstruction of both countries and further highlights Europe’s solidarity with the Caribbean, which we recognise as one of the most vulnerable regions in the world,” said Head of the European Union Delegation to Barbados and the Eastern Caribbean Ambassador Mikael Barfod.

The European Union is also providing 20 million euro to support the regional disaster management programme of the Caribbean Disaster Emergency Management Agency as it undertakes disaster risk reduction measures in the region.