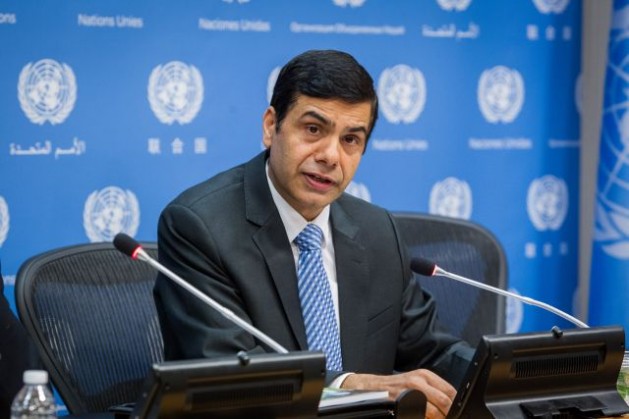 VIENNA, Nov 4 2014 (IPS) - Some 440 million people are living in 32 countries that are among the world’s poorest, most of them least developed, and geographically isolated from world markets not only because they have very few commodities to export, but also because they have no direct territorial access to the sea.

These landlocked developing countries (LLDCs) – 16 of which are located in Africa, 10 in Asia, four in Europe and two in Latin America – are drawing the focus of the United Nations at a conference in Vienna, the capital of Austria, which is also landlocked but does not suffer the disadvantages of LLDCs because of its membership in the 28-nation bloc of European countries.

“The LLDCs can count on the United Nations to transform their geographical disadvantages into platforms for great innovation and progress.” -- Secretary-General Ban Ki-moon

The gathering in Vienna from Nov. 3 to 5 is the Second U.N. Conference on LLDCs. The first conference was held in Almaty, Kazakhstan, in 2003, which adopted the Almaty Programme of Action.

The Vienna conference is set to approve an action plan that would stress the need to provide adequate aid to the least developed countries in pursuing their goals for greater economic development to transition from being landlocked to what Secretary-General Ban Ki-moon termed “land-linked”.

“We need to forge an even more ambitious, comprehensive and results-oriented plan,” he added. Only through comprehensive improvements in trade would such nations be best prepared to tackle the post-2015 agenda, Ban told some 1,000 delegates.

Echoing the expectations of several heads of state and government in the opening session, Ban said: “This conference is also a critical part of the U.N.’s broader campaign for a more sustainable future. We want to turn landlocked countries into land-linked countries – integrated with the global economy in a way that connects both markets and people.

“The United Nations will continue to help landlocked developing countries to achieve a life of dignity for all,” he added. “The LLDCs can count on the United Nations to transform their geographical disadvantages into platforms for great innovation and progress.”

“Export volumes, compared to imports, are still low, and are predominantly raw materials and commodity based. Critical physical infrastructure, such as roads, railways and energy, is either lacking or inadequate. Energy, a basic requirement for industrialisation and production, including the facilitation of ICT-based infrastructure, remains inadequate and expensive,” Kutesa added.

He referred to the secretary-general’s report that provides a sobering assessment of the task at hand.

It points out: “In 2012, the trade volume of ‘LLDCs’ was 61 percent that of coastal countries… the World Bank estimated that the basic import and export costs of ‘LLDCs’ were nearly twice those of their transit neighbours. LLDCs spent, on average, $3,204 to export a standardized container of cargo, whereas transit countries spent $1,268. Furthermore, while it cost LLDCs $3,884 to import a container of merchandise, their coastal neighbours incurred a cost of just $1,434 for the same.”

“With such statistics,” the General Assembly president added, “it may be an understatement to say that LLDCs are swimming against the tide. And while LLDCs have the primary responsibility for their own development, even with their best efforts, they cannot meet their development objectives on their own.”

LLDCs needed sustained and unwavering cooperation from transit countries; financial and technical support from bilateral and multilateral partners; and firm commitments from the international community, he added.

Engagement with the private sector was also essential, including through foreign direct investment and public-private partnerships.

He urged the new Programme of Action to be adopted in Vienna to support LLDCs to enhance their competitiveness, stimulate productive capacities, diversify exports, strengthen their resilience to external and internal shocks, and most importantly, ensure a better future for their citizens.

In his remarks to the conference, Gyan Chandra Acharya, the U.N. High Representative for the Least Developed Countries, Landlocked Developing Countries and Small Island Developing States, called for actions “that match the magnitude of the challenges of being landlocked”.

Urging greater synergy between the LLDC development agenda and the ongoing discussion around the next generation of development goals, Acharya said: “We have all agreed that the post-2015 development agenda would be transformative, inclusive and should ensure a life of dignity for all. LLDCs issues therefore rightly deserve due consideration in the formulation of the next global agenda.”