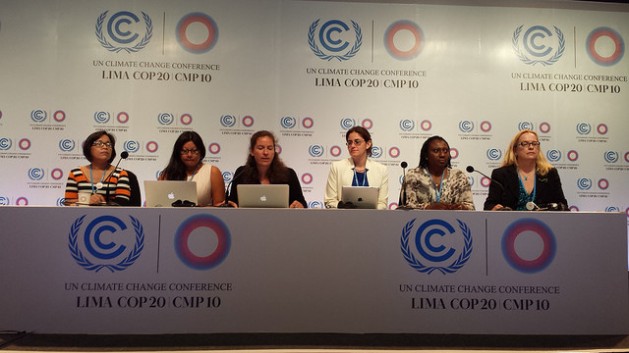 A group of activists tracking the inclusion of gender in the U.N. climate negotiations at Lima’s COP20, during a Dec. 9 panel. Credit: Diego Arguedas Ortiz/IPS

LIMA, Dec 10 2014 (IPS) - Despite international acknowledgement that women are disproportionately affected by climate change, the Lima climate negotiations have been slow to deliver progress on recognising their importance, while threats of pushback loom on the horizon.

“There are references to gender in those documents, but the language is overall weak. This is why we are pushing for gender equality, instead of gender balance,” Mrinalini Rai, a Nepali gender and indigenous peoples adviser for the Global Forest Coalition, told IPS.

Rai complained that some governments, led by Saudi Arabia, are trying to eradicate the concept of gender equality – promoted by nations like Mexico – from the negotiating texts discussed at the 20th Conference of the Parties (COP20) to the United Nations Framework Convention on Climate Change (UNFCCC), running Dec. 1-12.

“We feel marginalised and what I’ve seen is that women really suffer because of climate change. It’s affecting us, our farmland and our harvests. You can’t tell anymore when each season is going to be; that’s one of the reasons we decided to come to Lima.” -- Bertha Guarachi

Tuesday Dec. 8 was devoted to “Gender Day” at COP20, held in Lima this year, to reflect on the role women should have in the climate talks, amidst a growing trend of conservative positions on the question.

Rai underscored that “the ways women adapt to and mitigate climate change differ from those of men, and that’s why when we refer to gender equality our intention is to have women’s rights guaranteed in every negotiation and every document of the UNFCCC.”

The big thing, in the view of activists like Rai, is not the documents themselves, but what they could provide for women working in the field, far from Lima’s negotiating rooms. For her, it is not only about “acknowledging the differences” but about the language being “a means for pushing policies to actually land on those who need them.”

The Nepali activist works with indigenous communities in Thailand, where she has had firsthand experience with the disproportionate effects women suffer at the frontline of climate change, while they have less skills training and legal support than their male counterparts.

In the Bolivian community of Cebollullo, nested in the mountainous department or province of La Paz, local women also feel the impact climate change has on their daily routines.

“We feel marginalised and what I’ve seen is that women really suffer because of climate change. It’s affecting us, our farmland and our harvests,” Bertha Guarachi, a Cebollullo community leader, told IPS. “You can’t tell anymore when each season is going to be; that’s one of the reasons we decided to come to Lima.” 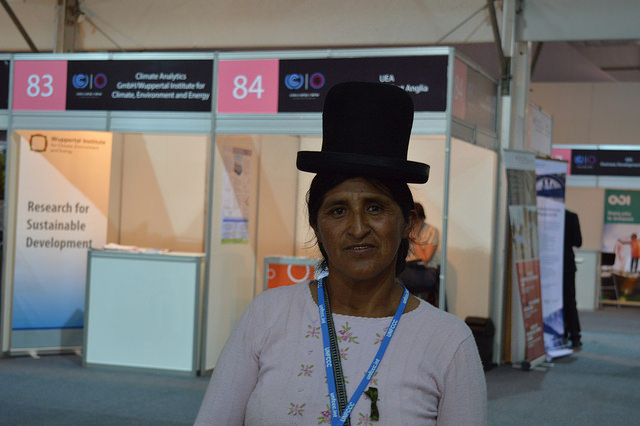 Bertha Guarachi, a leader of a small rural settlement in the Cebollullo valley in Bolivia, came to COP20 to learn how to manage climate change adaptation in her community. Credit: Diego Arguedas Ortiz/IPS

At a global level, a study by the German Development Institute concluded that women produce between 60 and 80 percent of all food in the developing world.

However, the same study, published in 2009, determined that only 10 per cent of them were landowners, and barely 2 per cent had proper paperwork for their land.

This means that in the event of finance by donors or international relief agencies tackling climate vulnerability reach those agricole regions, it’s more likely for men to receive it, since they are the official landowners, thus deepening the gender inequality gap and the worldwide warming challenge.

“Climate change is not only a scientific issue, but it also related to how it affects human being in a wider context, and in this case, particularly to women,” Elena Villanueva, from the Rural Development Program at the Flora Tristan Center, which focuses on gender and climate change, told IPS.

Of the three U.N. Conventions created in the 1992 Earth Summit in Rio de Janeiro – the Convention on Biological Diversity, the Convention to Combat Desertification and the UNFCCC – only the latter hasn’t included gender as a core issue in its principles, according to the Global Gender and Climate Alliance (GGCA).

However, during the Tuesday high-level meeting “Men and women taking action on gender equality and climate change: how far have we reached?”, the progress made in the past 20 years on women-related topics within the UNFCCC was acknowledged.

“As a young UNDP [U.N. Development Programme] officer, I was in Beijing for the 1995 Conference [the Fourth World Conference on Women] and back then it was revolutionary to say gender should be a topic within human rights,” Susan McDade, deputy director for UNDP’s Regional Bureau for Latin America and the Caribbean, said at the conference.

“Now no one would challenge that, which makes me optimistic. I was also in Rio and there is clear progress. When I look into climate talks, the only way for them to move is towards equality,” said McDade.

This perception collides with pressure from Saudi Arabia and other governments to eliminate more progressive gender language from the negotiations in Lima. This was more visible in a debate on future initiatives to open up scientific and political discussions on gender around the world.

“In this particular resolution there was a push to eliminate the term gender equality and replace it with gender balance, which is not the same,” said Roberto Dondisch, general director for global affairs at Mexico’s foreign ministry.

“For us, gender equality is important, and it’s not something new at all. It was established at the Cancun COP [in 2010], so it’s something we can’t accept backtracking on,” the official told IPS.

According to the Global Gender and Climate Alliance, which tracks the gender negotiations, the term gender equality was maintained thanks to Mexico’s efforts, but with some drawbacks.

Ana Rojas, a representative for the Alliance at COP20, told IPS the text lost its initial ambition because “it wasn’t real equality.”

“The final text shows something beyond balance, and it has a mention on equality, but it’s tailored to each country’s cultural context,” which would allow each nation to interpret it the way it wanted, Rojas explained. That view is shared by other stakeholders following the negotiations.

This lack of content can also be felt in the smaller representation of women in decision-making spaces within the Convention.

An analysis published in early December by the Peruvian National Organisation of Andean and Amazonian Indigenous Women highlighted the gender disparity in high-level bodies of the UNFCCC.

The report concluded that three-fourths of the 126 members of six governing bodies, including the Adaptation Committee and the Finance Committee, were men.

In fact, despite the disproportionate impact of climate change on women and their positive influence as change-makers, the concept of gender was not formally included in the UNFCCC negotiations until 2007.

Until then there was no mention of gender in the negotiating texts, according to gender activists.