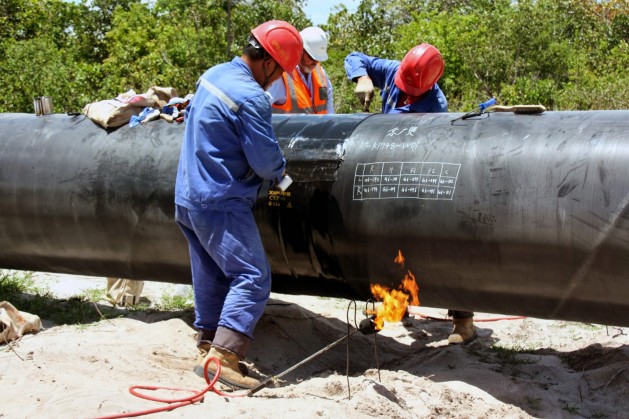 Engineers working on a 512 km pipeline to scale up the amount of gas transported to Dar es Salaam plants for electricity generation and other industrial supplies. Allegations of corruption in Tanzania’s energy sector are holding up foreign aid disbursement. Credit: Juma Mtanda

Donors – including the United Kingdom, Germany and the World Bank – are withholding 449 million out of 558 million dollars pledged for the 2014/15 budget, pending a satisfactory outcome to investigations over corruption in the energy sector.

Senior government officials have been accused by the Parliament of authorising controversial payments of 122 million dollars to Pan Africa Power Solutions Tanzania Limited (PAP), which claims to have bought a 70 percent share of the Independent Power Tanzania Limited (IPTL) – a private energy company contracted by the government to produce electricity.

The government’s inability to wipe out corruption in the energy sector is setting a bad precedent because the country is poised to prosper economically in the wake of massive discoveries of natural gas resources.

“Many infrastructure development projects that require donor funding will probably stall due to this problem,” Benson Bana, a political analyst at Dar es Salaam University, told IPS. “Donors are keen to see their money is spent on intended objectives and government must learn a lesson to ensure that public funds are managed well.”

East Africa’s second largest economy after Kenya  is currently implementing a myriad of projects that require donor funding in the energy and  infrastructure sectors, such as construction of ports, roads and power plants  under a  25.2 billion dollar five-year development plan.

But the government said last year that the impending delay in the disbursement of aid funds may prompt it to shelve some critical projects until the next financial year.

The international Monetary Fund (IMF) has added its voice to the ongoing standoff between Tanzania and foreign donors, saying that further delay in disbursement of aid would certainly affect the country’s economic performance.

“Performance … was satisfactory through June, but has deteriorated since and risks have risen, stemming from delays in disbursements of donor assistance and external non-concessional borrowing, and shortfalls in domestic revenues,” the IMF said in a statement posted on its website in January 2015.

Tanzania is one of the biggest aid recipients in sub-Saharan Africa, with an annual aid inflow in grants and concessional loans ranging from 20 to 30 percent of its budget.

The move by donors to freeze aid over corruption concerns, said the IMF, is a stunning blow to the country’s economy.

“It will be critical to the business environment to address the governance issues raised by the IPTL case, which would also unlock donor assistance,” the IMF said.

“Achieving our revenue target is a matter of life or death; we are very serious in our quest to reduce reliance on foreign aid and we are refining our business environment to attract investments that can yield revenues,” said Finance Minister Saada Mkuya.

Critics told IPS that it is not wise for Tanzania to cling to unpredictable foreign aid to finance its budget after more than 50 years of political independence.

“For a country like ours to keep depending on donors to finance our development is not healthy, there’s no doubt many project will fail to take off because of this standoff,” Humphrey Moshi, an economist and professor at the University of Dar es Salaam, told IPS.

Political observers say that the government’s inability to wipe out corruption in the energy sector is setting a bad precedent because the country is poised to prosper economically in the wake of massive discoveries of natural gas resources.

“Corruption in the energy sector can be reduced by introducing strong accountability systems in the sector,” Zitto Kabwe, the chairman of a parliamentary oversight committee on public accounts, told IPS, adding that “legislations that subject contracts to parliamentary vetting and transparency would really help.”

Latest data from the Tanzania Petroleum Development Corporation show that Tanzania has estimated reserves of 53.2 trillion cubic feet of natural gas off its southern coast.  According to local analysts, these resources are more than enough to put the country on a path of economic development while ending its dependence on aid.

As the government grappled to bridge gaps in its budget, donors last week said  that they would only release the rest of the aid money pledged after seeing appropriate action taken against officials implicated in the so-called “escrow scandal”.

“Budget support development partners in Tanzania take the emerging IPTL case with the utmost seriousness and are carefully monitoring its development  as the case involves  large amounts of public funds,” Sinikka Antila, Finland’s ambassador to Tanzania and chairperson of Tanzania’s donor group, was quoted as saying.

In November last year, parliament called on government to sack senior officials, including the country’s Attorney General and  energy minister who, it said, had played an instrumental role to facilitate the dubious IPTL-PAP deal. The Attorney General, Frederick Werema, has since resigned.

In December, in a desperate bid to win back donor confidence, President Jakaya Kikwete sacked Anna Tibaijuka – a senior cabinet minister holding the land and human settlement development portfolio – for allegedly having received a1.6 billion shilling gift from one of the IPTL’s shareholders contrary to the government’s public leadership code of ethics.

In what appears to be a show of strength, the United States, through its Millennium Challenge Corporation (MCC), has expressed serious concern about the country’s sluggish pace in controlling corruption and has urged the government to take firm concrete steps to combat corruption as a condition for the approval of future aid.

“Progress in combating corruption is essential to a new MCC compact, as well to an overall improved business climate in Tanzania,” Mark Childress, U.S. Ambassador to Tanzania said in December 2014.

“We are encouraged by the State House’s announcement of December 9 that it will soon address the parliamentary resolutions linked to IPTL, and we urge quick government action, given the impact on several key development issues.”

Tanzania was one of 10 countries discussed by the MCC Board, which met in December to determine the eligibility of countries to begin or continue the compact development process.

If finalised, this would be Tanzania’s second MCC compact. Between 2008 and 2013, the MCC funded a 698 million dollar compact for investment projects in water, roads and electric power throughout Tanzania.