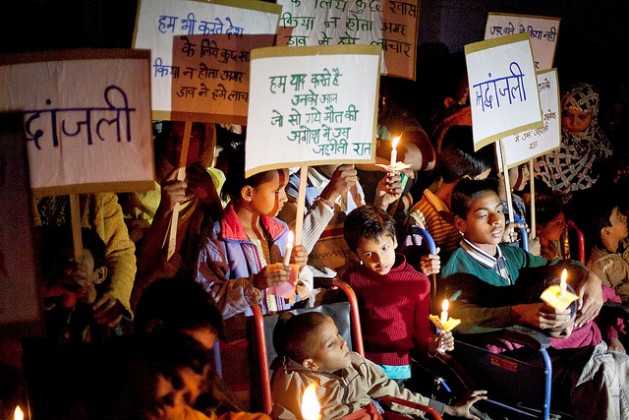 NEW DELHI, Jan 11 2015 (IPS) - Three decades after 40 tons of deadly methyl isocyanate gas leaked from the Union Carbide India Limited plant in the central Indian city of Bhopal on Dec. 3, 1984 – killing an estimated 4,000 almost instantly and maiming and blinding hundreds of thousands of others – the world’s worst industrial disaster remains a sharp lesson on the need for greater safety regulations in Asia’s third-largest economy.

Thirty years on, thousands of children in Bhopal, capital of the state of Madhya Pradesh, as well as in adjoining regions, are still being born with twisted limbs and other physical and mental disabilities caused by their parents’ exposure to the gas.

"Even if we have not seen […] another horrific human tragedy like on the night of Dec. 3, 1984, the country continues to have many mini-Bhopals – industrial accidents, which take lives and throw up a huge challenge of hazardous waste contamination.” -- Sunita Narain, director-general of the Centre for Science and Environment (CSE)
The poisonous vapours, which leached far into the soil and groundwater over the years, are still killing those victims who are too poor to move elsewhere.

“No consolidated record exists to show how many people are still suffering. As a result, even after the government paid compensation – however little – to more than half a million victims, fresh claims are still pouring in,” the Delhi-based Centre for Science and Environment (CSE) said in a book published last month.

In 2013, the centre collaborated with experts from across the country to develop a five-year action plan aimed at remediation of soil and toxic waste inside the plant and decontamination of the groundwater in the nearby area.

Intriguingly, even as the disaster continues to spawn books, movies and debates on corporate liability and poor safety regulations in Indian industries, the country’s ability to tackle a similar fiasco is still seriously in question.

“Post-Bhopal, India improved its legislations for chemical industrial disasters and worker safety, but it is still an unfinished business,” Sunita Narain, director-general of CSE, said at the book’s launch.

“Even if we have not seen […] another horrific human tragedy like on the night of Dec. 3, 1984, the country continues to have many mini-Bhopals – industrial accidents, which take lives and throw up a huge challenge of hazardous waste contamination.”

Several experts who spoke with IPS said that while the government has displayed alacrity in setting up sundry committees to assess the damage and recommend safeguards, mishaps continue to wreak havoc in the country’s mines and factories.

The problem is compounded by a lax regulatory environment, and entrenched corruption. As a result, predict economists, exponential growth in Asia’s third largest economy, home to over 1.2 billion people, will continue to come at a significant cost to the environment and human safety.

This is ironic as corporate law experts emphasize that India has one of the most complex and comprehensive laws on industrial safety.

For instance, safety audits are now mandatory in all factories storing hazardous chemicals over a certain threshold.

The Chemical Accidents Rules 1996 was introduced to ensure better safety standards while the Factories Act was remodelled to appoint an “occupier”, from the company’s top management, who would be totally responsible for a mishap, according to risk management consultant B. Karthikeyan

“However, the most significant piece of legislation to be introduced in the aftermath of Bhopal was the Environment Protection Act (EPA) of 1986, which empowers the [Central government] to issue direct orders to close, prohibit or regulate any violating industry,” explains Gita Sareen, a Mumbai-based corporate lawyer.

“The umbrella legislation also implements the mandate of the United Nations Conference on Human Environment to protect and improve the human environment and prevent hazards to human beings and other living creatures,” she told IPS.

But the gap between promises and practices is huge. Health facilities at most factories are still not up to scratch and violators are rarely punished. According to CSE’s records, in 2011 over 1,000 people lost their lives in factory accidents across India and several thousand were injured.

Contamination of land and water is also a growing problem. In 2010, the Union Ministry of Environment and Forests identified 10 toxic sites housing thousands of tonnes of hazardous waste.

“The worst part is that despite so much brouhaha, the site of the Union Carbide factory in Bhopal has still not been cleared of the toxic waste. Various parties are squabbling over how to clean the site, what should be done with the waste and who should pay for it even as the pollution continues to wreak havoc and engulf more areas,” Chandra Bhushan, deputy director at CSE, told IPS.

And while safety consciousness and compliance have improved somewhat in the organised sector involving large corporations due to their corporate image, the unorganised sector is still messy.

“Fire in cracker factories [and] repeated mishaps in acid factories are rampant [and] point to the need for greater surveillance in this sector,” he added. “The crux of the problem is that ‘safety’ still hasn’t become a culture in India unlike the West.”

According to Dr. Shashank Shekhar, a professor with the department of geology at Delhi University, industries continue to pollute, their rampant discharge of industrial effluents being the single biggest reason for water contamination and ill-health of millions of people in India.

In a study he co-authored, Shekhar points out how groundwater across the country is contaminated with cancer-inducing lead, and cadmium, as well as other hazardous materials such as arsenic, nitrate, manganese and iron.

“Heavy metals even in small quantities dissolved in water are highly toxic for a human body and can cause irreparable damage,” the scholar told IPS. “Yet the problem remains unchecked.”

Another problem, point out legal experts, is that in India, the processes for environmental impact assessments (EIA) are flawed.

“The country needs a thorough overhaul of these processes to ensure that there’s objectivity and due diligence involved in the exercise. Currently, industries hire independent assessors for EIA and pay for it from their own pocket. Naturally, the supervisor who is getting paid by the company for the audit will tend to favour his employer and not be impartial in his report,” explains Shekhar.

Rather than adding to the avalanche of existing laws, what will be more effective, say experts, is to have stricter execution of regulations.