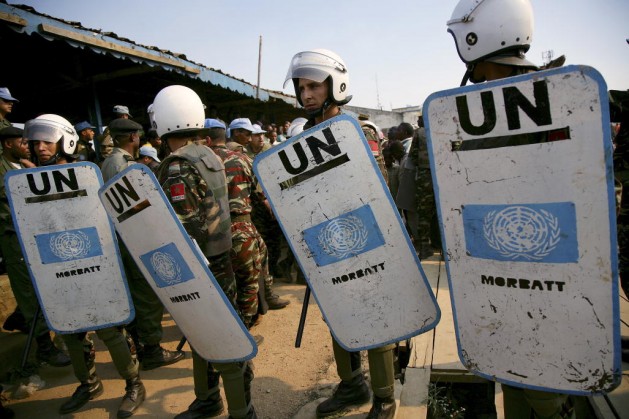 United Nations Organization Mission in the Democratic Republic of the Congo (MONUC) peacekeepers provide security at a trial. U.N. staffers have been killed in the country in recent years. Credit: UN Photo/Martine Perret.

UNITED NATIONS, Jan 14 2015 (IPS) - The widespread field operations of the United Nations – primarily in conflict zones in Africa, Asia and the Middle East – continue to be some of the world’s deadliest.

The hazards are so predictable that the United Nations – and its agencies – subtly encourage staffers to write their last will before leaving home.

And working for the United Nations proved especially deadly in 2014 as its personnel “continued to be subject to deliberate attacks and exposed to hazardous environments”, according to the Staff Union’s Standing Committee for the Security and Independence of the International Civil Service.

“I think the most appropriate question is: should the U.N. send staff members to places where their security and safety cannot be guaranteed?” - Barbara Tavora-Jainchill, president of the U.N. Staff Union

Asked if the United Nations was doing enough to protect its staff in these overseas operations, Barbara Tavora-Jainchill, president of the U.N. Staff Union, told IPS:  “This is a tricky question, because in principle the responsibility for the protection belongs primarily to the host country, i.e., the country where the staff member is working/living”.

“I think the most appropriate question is: should the U.N. send staff members to places where their security and safety cannot be guaranteed?” she asked.

In 2012, 37 U.N. personnel, including 20 civilians and 17 peacekeepers, two of them police officers, were killed in the line of duty.

According to the Staff Union Standing Committee, the incident with the most casualties took place in Northern Mali, where nine peacekeepers were killed last October when their convoy was
ambushed.

“I am appalled by the number of humanitarian workers and peacekeepers who have been deliberately targeted in the past year, while they were trying to help people in crisis,” he said, at a memorial ceremony last week to honour fallen staff members.

In the past year, he said, U.N. staff members were killed while relaxing over dinner in a restaurant in Kabul while two colleagues were targeted after getting off a plane in Somalia.

Speaking at the same ceremony, Ian Richards, president of the Coordinating Committee of International Staff Unions, said: “We are asked to work in some of the world’s most difficult and dangerous places.”

He said the work is fulfilling and “we do it willingly.”  “But all we ask in return is that the Organisation do its best to protect us, look after our families, and hold those who attack us, including governments, responsible for their actions.”

In a statement released Tuesday, the Staff Union Standing Committee said South Sudan was the country with the highest number of national staff members detained or abducted.

In May, there were allegations that members of South Sudan’s security forces assaulted and illegally detained two staff members in separate incidents in Juba.

In August, South Sudan’s National Security Service detained two national staff.  And in October, eight armed men wearing plain clothes seized a World Food Programme staff member who was waiting in line for a flight from Malakal airport and drove him to an unknown location.

Scores of United Nations staff and associated personnel were also subject
to hostage-taking, kidnapping and abductions, the statement said.

The worst incidents took place in the Golan Heights, where 44 Fijian peacekeepers were detained by armed opposition elements between 28 August and 11 September last year.

Meanwhile, U.N. personnel were abducted in Yemen, the Sudan’s Darfur region, Pakistan and in South Sudan.

An international contractor from India working for the U.N Mission in Darfur (UNAMID) was released on 12 June after 94 days of captivity.

Asked about “hazard pay” for staffers in overseas operations, Tavora-Jainchill told IPS staff members do get hazard/danger pay depending on conditions of the individual duty station.

She said, “Each duty station is a unique duty station and receives unique consideration for hazard/danger pay, so your question cannot be answered in a general manner.”

United Nations staff members participate in a Pension Fund and there are provisions in that pension related to their death and the payment of pension/indemnities to their survivors, she added.

Asked about the will, she said: “That question is very interesting because I also heard that and some time ago asked someone from the U.N. Administration if it was really the case.”

The response was that those staff members are asked to consider “putting their business and paperwork in order”.

“My understanding from the answer is that the paperwork might include a will, she added.”